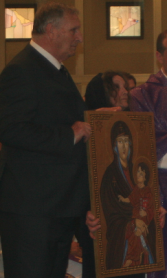 Edit: one might say providentially.  See Rorate report too.
(Rome) A surprising encounter witnessed Pope Francis last 6 April. This Sunday he attended the  Roman city parish of San Gregorio Magno in the suburbs Magliana and came across the Franciscans of the Immaculate, whose until recently blossoming order's suppression has been overshadowed by the Argentine pontificate.
The Salus Populi Romani icon  is particularly dear to Pope Francis. On the morning after his election, he left the   the Vatican unannounced to head down to the Patriarchal Basilica of Santa Maria Maggiore and to venerate the Mother of God before the holy image.

Pope Francis is expected but certainly not  an exact  copy of the miraculous image he'd been given last Sunday. At the end of  Holy Mass in the Magliana, the Pope was presented with a copy of the icon. Still less did the Church leader expect  to encounter in his parish visit  the Franciscan Friars of the Immaculate Conception,or at least the family of Father Stefano Maria Manelli, the founder of   this extraordinary order, that was like  a beacon of hope in the Catholic religious landscape of the West until the summer of the previous year. Since then, the Order has experienced dark times.

Family of Founder Manelli Presented to the Pope

After the Holy Mass members of the Manelli family most notably  the couple Pio and Anna Maria Manelli,  presented the Pope the icon in memory of the parents or grandparents Settimio and Licia Manelli.  Settimio (1886-1978) and Licia Manelli (1907-2004) are the parents of 21 children. A son, Father Stefano Maria Manelli,  is the founder of the religious family of the Franciscans of the Immaculate, he was the Superior General  until the summer of 2013.  His younger brother Pio, named after Padre Pio of Pietrelcina, who was the spiritual father of his parents, lives with his large family in the parish which Pope Francis visited. Pio and Anna Maria Manelli have nine children. Six of them belong to the Order founded by her uncle Stefano Maria. Two sons are in the Franciscans of the Immaculate, four daughters Franciscans of the Immaculate. The parents or grandparents Settimio and Licia Manelli were recognized by the Church as a servants of God. Their beatification process is underway.
The Manelli family is firmly rooted in the Roman suburban parish, which the Pope visited. Last  October 30th    Father Stefano Manelli offered a Mass of Thanksgiving for his ordination 58 years ago in the parish church of San Gregorio Magno along with many brothers and sisters of his Order. It was a celebration that had to be expressly approved by the Apostolic Commissioner, Father Fidenzio Volpi.   After the dismissal of Father Manelli as Superior General and the entire Order.   Line Father Volpi was used by the Congregation of Religious as a delegate of the Holy See. He has since been alone under the management of the whole Order.

The radical intervention against  the flowering,  pastorally bi-ritual, with the old rite internally within the Order with a strong inclination to the Catholic tradition,  is a central feature of the current pontificate.  The  current  prohibition against celebrating the traditional rite and to be able to act according to  tradition, was has disturbed its relationship with the reigning Pope  in the Order promoted  by Pope Benedict  with the benevolence of the Church.
It is still unclear why the young religious with many vocations were placed under provisional administration. The Congregation of Religious clearly despised  the Order for  the sole reason because it had changed from the new rite to the old rite,  and unlike most religious in the West could attract many vocations.

It was the parish priest of San Gregorio Magno,   who presented  the family Manelli to the Pope  and drew attention to the servants of God Settimio and Licia Manelli.  Literally,  he said  when he introduced  Pio and Anna Maria Manelli: "Having a large family in the parish, is a special gift nowadays. In addition, this family has produced many priests and religious. A blessing that should not remain hidden."
Anna Maria Manelli, the daughter in law of the Servant of God and sister in law of the Founder of the Franciscans of the Immaculate, had made ​​the copy of the icon of Mary herself. Together with her ​​husband,  Pio,  she handed the Pope a copy of the icon Salus Populi Romani.

Appeal  to  the Pope to Get  the Order of St. Francis of Immaculate  "out From the Crypt"

In  the ensuing  personal conversation they begged Pope Francis, if  the Franciscans of the Immaculate could again be "taken  from the crypt", to which the Order has been exiled by the actions of the Congregation of Religious. It was an allusion to the preaching of the Pope, who had previously spoken in his Homily on the Raising of Lazarus from the dead, the Lord commanded, rise out of the grave.

Pope Francis smiled visibly surprised at the unexpected confrontation with the question of the Franciscans of the Immaculate, patted the hands of the couple in thanks for the icon, and  the cheek of the icon painter and said, "Soon, soon".
"What exactly this 'soon' means, one does not know," said Sandro Magister the Vaticanist.  At least the most optimistic now hope for an early and peaceful end to the provisional administration of the Order.
Text: Giuseppe Nardi
Picture: Settimo Cielo
Trans: Tancred vekron99@hotmail.com
Link to Katholisches...
AMGD
Posted by Tancred at 12:26 AM

I'm not trusting "Soon" until it's "Now"

Excuse me, but how many times have the good Franciscans of the Immaculate ask for permission to celebrate the original Mass, and have been denied?

Some of the requests have been approved, but most have not.

In Italy it has been reported that of the 33 places where the FFI once offered the TLM, three have been given permission. As far as is known, only one place in the US: a parish near one of the friaries where the priest friars offer a Sunday TLM.

"Soon" can mean anything. Also in what condition? A condition of a new constitution? That will not work because any Institute that turns from its founder's charisms seem to die off. It must be restored as the founders would direct. Even so, it seems a split is inevitable. The so called "internal conflict" was orchestrated by certain dissenting friars (some of whom are in Rome working with the commissar) and they certainly would not now bow to the founders direction and those loyal to the founders will not accept a lax and new constitution. The fabric has been torn. If the Institute is allowed to split and go under Ecclesia Dei then perhaps that portion can again grow and welcome vocations. It has been a time of severe testing with loyal friars suffering persecution with heroic and holy patience and in silence for the most part. God will reward them.

The thing that might also be worth mentioning is that this is an admission that the FFI is in some kind of dire situation.

Terrible that these suffering people had to beg the Pope to stop the destruction of the FFI. blessed Michael defend us in battle ...

Notwithstanding the inner turmoil and suffering these good priests have had to bear since their Order was placed in the hands on the Vatican's Apostolic Commissioner, Fr. Volpi, they continue to be loyal and faithful sons of the Church. They often bring Pope Francis' words into their homilies that one can listen to on 'Air Maria'.

I have re-blogged the above article on Catholicism Pure & Simple.