Edit: this is the historic Cathedral overlooking St. Paul from the heights, across the street from the James J. Hill Mansion. The photo was taken yesterday as the canonizations were taking place in Rome. 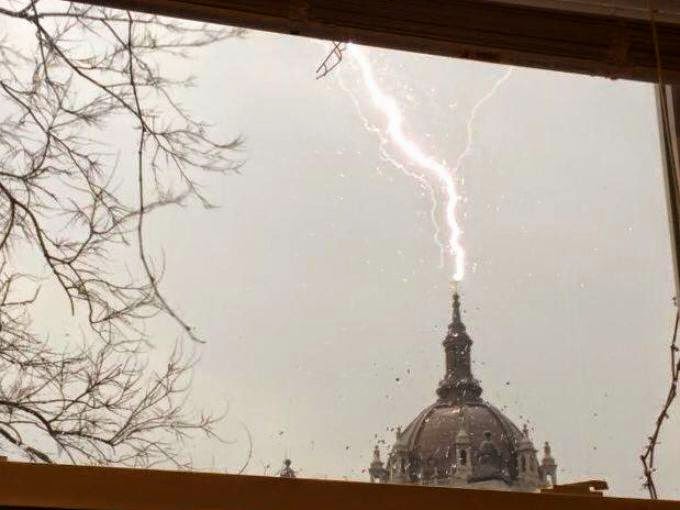 A great deal of official praise and brouhaha internationally about the double "conansiations" included effusive laudatory words (or was it pure misleading flattery) from Barack Obama about these two popes. The claims about the new world they are alleged to have created are beyond all realistic credibility and belief.

A world in which increasing numbers of children are systematically abused by international rings of sexual predators and covered up by the church and the secular powers. In UK, 100,000 children disappear every year according to the Children's Society. It is similar elsewhere. The Vatican had to raise the age for sexual consent from 12 to 18 last year under immense pressure from the UN. But this only facilitates a deteriorating situation as little will be done to expose those at the highest level. There will be a few concessionary scapegoats.

There is even more war and conflict since the alleged "fall of communism" which is really more of an illusion than a fact; large parts of Northern Africa and The Middle East are becoming ungovernable aided and abetted by the USA, EU and UK sponsoring islamist terrorism. Also, another salient fact is that the incidence of poverty is greater now than it was 100 years ago. For example, in USA 1% of the population now own 40% of the wealth of the USA. This is exacerbating rapidly.

A church that panders to the erroneous belief that we can believe almost what we like and dialogue with anyone and anything in the vain hope that we can "change the world" for the better (depending on what we mean by this), is living a dangerous illusion. Our Blessed Lord gave it a divine mandate to evangelise and convert but instead since 1965 it has opted for inculturation, relativism, horizontalisation and placed man, not Christ, at the centre of its supposed mission.

Obama is a crafty fox - he knows perfectly well that post-conciliar ecclesiastical liberal modernism advances his cause - increasing population control; abortion as a right paid for by public taxation; artificial birth-control; euthanasia; reducing personal liberty; media manipulation of public beliefs; privatisation of the faith; homosexualisation of society; increasing surveillance and use of politicised security mechanisms and many other policies. By weakening the church and dividing it against itself with relativism; inculturation, anthropocentrism and horizontalisation, the church has become an institution easier to control and manipulate by the principalities and powers of this world.

The processes of conanisation are politicised now by fast-tracking and streamlining - in the hands of liberal modernists who are abusing them both quantitatively and philosophically. 1984 marks a tragic date in their reductio ad absurdum with another 3000 alleged saints & blesseds added rapidly in a generation. How can this do nothing other than devalue and make mockery of it? No wonder Obama and his syncretic government colleagues have been so delighted with recent papacies because they have played perfectly into their hands. The freemasons have done a wonderful job and achieved their objectives. They have enjoyed a succession of enfeebled de-catholicising papacies whose liberal modernism has politically sanitised The Faith, removing its ability to be spiritually effective. Satanism is on the increase; sodomy advances; child abuse is endemic; society is materialistic and sexualised; violence is glorified virtually and in reality; absolute poverty increases and the church, as Cardinal Brandmuller stated correctly recently, is in a state of chaos because its Cardinals and bishops, like its presbyterate, are ignorant about The Faith. Never a truer word spoken for the post-conciliar era. This is above all else, an era of "ignorance".

Looks like Archbishop Romero was quite happy to use the mass as a political tool.
According to wikipedia in protest at the killings of a politically active jesuit priest, Archbishop Romero canceled Masses throughout the archdiocese, in favor of one single Mass in the cathedral in San Salvador.
This seems to me overtly political and not in conformity with the strict
political impartiality required of all priests and bishops especially during times of civil war.
If priests and bishops are seen to be taking active sides in civil wars then they will be seen as legitimate targets irrespective of their personal sanctity or not.

Certainly the question of "prudence" is at issue concerning some of the late archbishop Romeros decisions.

Of course such words are now probably old fashioned, maybe even, horror of horrors, "pelagian".

Is it prudent of a priest/bishop to endanger not just your own but others lives in a vicious civil war?