Ibrahim A. -- A Ghanian Asylum Seeker as Church Desecrator

On Saturday afternoon of the 29th March 2014 there were four churches of Vienna which suffered severe, religiously motivated criminal damage, especially statues of saints and sacred objects. Alleged perpetrators: an asylum seeker from Ghana. 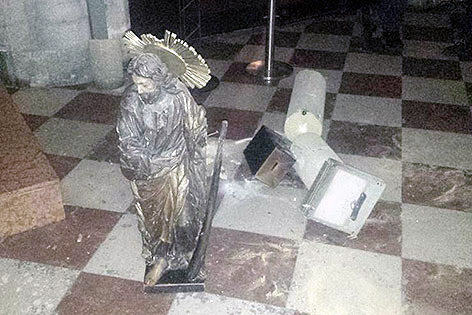 Has the Archdiocese of Vienna and kathpress has hidden the (alleged) vandal, Ibrahim A.'s religious belief so as not to mess up the Caritas business with the asylum seekers? [Image: National Police Headquarters in Vienna, image quote by orf.at]

In a press release from the Police Headquarters in Vienna from 30March 2014   they describe damage to property in St. Stephen's Cathedral: "On 29.03.2014 at 17:15 hours an unidentified man threw a statue of the saint in the church of St. Stephen from its marble base. A moment later the man wanted to leave the church. Many passers-by forced the 37-year-old Ibrahim A. to the ground in front of the cathedral shop  and held him until the police arrived. The accused described religious reasons as his motive. He was arrested."
The Vienna Cathedral Parish Priest Fr. Anton Faber supposed that the offender Ibrahim A. had "been a madman [I], who was playing religious themed music prior to the incident on his iPod." In addition, the offender Ibrahim had suffered a  "psychotic episode" and been seized by an "internal disturbance".
Ibrahim A. was prevented from the destruction of the Sacred Heart image.

In the course of detention by those present, Ibrahim A. had also injured a person slightly.

The spokesman for the Vienna State Police, Roman Hahslinger, although the presumption was obvious that the perpetrator was a serial offender, he was not arrested apparently.
Rather, the police didn't   question   Ibrahim A. at the time.  Not until this week will he be asked about the other crime scenes. -  Thus, if he can be found again the police have pre-announced his timely arrest.
Oddly enough the police did not consider the grounds for detention (such as  the danger of recidivism).

Ibrahim A. - an asylum seeker from Ghana

In media reports, the origin and status of the (alleged) church vandal is mostly concealed.
He is the 37-year old Ibrahim A., an asylum seeker from Ghana, who is housed in the care center in Lower Austria Traiskirchen.
How fortunate that he was able to  save, despite the assuredly alleged persecution  in Ghana, his iPod from his African tormentors. Otherwise he would not have gotten the "inspiration",  to "proceed against religious statues."
The fact that he referred to the Catholic faithful as "puppets", fits well into the picture.

Characteristically,  the Archdiocese of Vienna and Catholic press was silent on their websites about the origin of the offender and the Cathedral Parish Priest Fr. Faber  himself  and the release of the police referred to the religious motivation of the Ghanaian asylum.
The other assessments of the offender by Father ("seized by an inner disturbance" or "psychotic episode") Faber, however, were cited.
In the OTS- broadcast, the Catholic press (on the following day at 14:02 clock) is rather pointed out that "the uncharacteristic act of vandalism for the otherwise peaceful life of religions in Vienna" and that "also no one was [would be] harmed."
Why is there silence about  the Muslim religious devotion of the (alleged) perpetrator?

For legal reasons, the presumption of innocence for the asylum seeker from Ghana, Ibrahim A. applies. [Naturally!]
Trans: Tancred vekron99@hotmail.com
Kreuz.net...

He should be whipped and sent back to where he came from. Why give him asylum. He obviously has no appreciation of it.

He must be hunted down and beaten with a club. If these cowardly do-gooders wish to suffer the same fate, let them suffer as Muslims- you are either for Christ or against Christ, and these Muslim-kissers do nothing to protect and preserve what older generations have left us.

"Now we command you, brethren, in the name of our Lord Jesus Christ, that you keep aloof from every brother who leads an unruly life and not according to the tradition which you received from us." (2 Thess. 3:6,)

If the Apostle says so about our so-called "Separated Bretheren", what more can be said about these Sub-Saharan Mohammedians who are only one step away from outright heathenism?

That would be deemed "racist" and breaking the first commandment of the EU. I think their second commandment is "Thou shalt honor the environment".

Send them all back in every available cattle boat!

If the SSPX are half the Catholics they seem to be, they - unlike the bishops - will want to make reparation for this.