Conflicting Attempts to Explain: One Time It’s Pope Francis, Another Time it’s Jorge Mario Bergolio? -- Yet Again, The Difficult Interaction of Catholic Media With This Pontificate 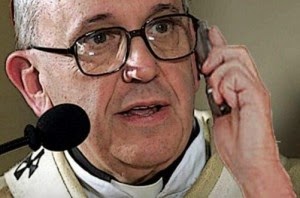 (Rome) Jewish convert Ariel Levi di Gualdo , who became a Catholic priest, the chief editor of a well-known Catholic website has penned  a letter. The occasion was the phone call from Pope Francis to an Argentinian who thereby made ​ statements he allegedly made. The reason is the manner in which controversial actions,  played down, minimized, hidden, and reinterpreted   were justified by certain Catholic.
Since the beginning of the pontificate of Pope Francis, some  faithful Catholic media are in an unenviable predicament. How to deal with the pontificate of Pope Francis? The coordinates of the previous years under Pope Benedict XVI. no longer apply. An unconditional ostrich-like attitude to the motto: "Everything the Pope does is great" can only hold out at a high and especially bitter price.
It needs critical thinking, and also a rejection of any of the various  requests for lese majeste. It must be a painful emission, suddenly to find yourself with the same choir that yesterday criticized some of the victims, because they themselves are responsible for serious abuses in the local churches or tolerate them  at least. This must impose the question if you do not sit in the wrong boat. Really?
Some seem quite resistant. When Pope Francis has made a "Bergogliade”, as  he seems to forget again and again to be the Pope,  thus the Vicar of Christ and successor of Peter and not  an appealing, unfailingly idiomatic,  casual,  quasi anonymous priest somewhere,  there are those who remain true to the Church,  but  increasingly critical Catholics and truly  acrobatic masters making feats into every conceivable variant for the critical inquirer to insist that everything is fine and the rest are merely “misunderstandings”, that someone always has otherwise misunderstood something and it’s always someone else's fault .
This includes variants of schizophrenic explanation, such as the distinction of "official" Pope and a "private" Pope, as  the actor in certain cases is Pope Francis, in others,  Jorge Mario Bergoglio. You can not get past the controversial "Bergogliades" because they usually  put the pope’s  actions   to public attention in the shadows and are known in no time in the far corners of the world. Avoid it but frantically to get to the heart of the question: Bergoglio.
The Catholic priest Ariel Levi Stefano di Gualdo has written to the editor of a Catholic website that is faithfully Catholic and pious, also presenting many questions, but the key question to show this tense contradiction at work.  Here is a translation. We do this  refraining to mention the name of the chief editor and his website. Instead, anyone can include the name himself. There are also candidates for this  throughout the world.
.

Who Speculated About Bergoglio’s Phone Calls?

by Ariel S. Levi di Gualdo
Your recent article is really perfectly and even understandable, especially if you write:

"In short, the Bergolio effect has only marginally to do with the real Pope Francis, but much with the desires and expectations of the world - and part of the Church - with respect to the current pontificate.  And the same goes for those in the Church who have appointed themselves as official interpreters of the Pope. The most recent case is that of an Argentinian who has portrayed as a woman who presented her situation in a letter last September to the Pope, who is married to a divorced man for 19 years and is therefore prevented from receiving communion. The Pope - according to the husband -  called  her right after Easter to apologize for the late reply and told her that she could confidently receive communion, and anyway the Vatican is dealing with this problem."

But why do I say that you dance around the edges, but you are hesitant to get to the heart of what is bitter and painful, no doubt, even embarrassing, for many faithful Catholics and many faithful priests? Because you, despite your true faith and intellect, you did not face the central question and do not answer it. In other words: Who then caused some misunderstandings, often even very serious, which then require an acrobatic interpretation to say that the Pope has perhaps not said, or not in that way, or if he has said it, that he did not want to say what others have misunderstood from what he said?
It's just that sometimes reckless speeches by Jorge Mario Bergoglio, which are  often not clear, but ambiguous and vague, especially if he should express himself,  as befits the Roman Pope Francis.
The Roman Pontiff has an inherent and especially universal language, and not some “next door” jargon. The Roman Pontiff also adheres  all the more to particular forms: Homilies, locutions, encyclicals, letters and Apostolic Exhortations ... and often these texts are reviewed prior to their announcement, publication and dissemination by the best theologians, philosophers, historians, lawyers, sociologists, political scientists, diplomats and communication officers who are more professional than is Father Federico Lombardi, who succeeded the real genius of Joaquin Navarro-Valls because after so many years that the Vatican press office was held by a leading figure of Opus Dei it was somehow to go to their opponents, the Jesuits had to be given a piece of candy. In order to understand us:  in the opposite case things would have been different, after all, we are talking about two dogs - like an old fable says - who want to gnaw at the same bone, worse, who want to bring it into their possession. Both the one and the other are loyal to the Church and the papacy  as long as the Church and the papacy do what they want, otherwise they will not hesitate even to declare with all due irony, they are not  the Pope’s  Swiss Guard.
The Holy Father is even free as a successor of Peter  as a private teacher,   “to  make all  of the telephone counseling that he wants" all while there are bishops in various parts of the world who live in very difficult situations, in  the open persecution of their local churches and their faithful, are not even able to be received. Or while good priests who are frequently exposed to veritable clerical slaughter within the dioceses or ecclesiastical  structures, have never received a response to their requests, even though their situation really cries out to heaven.
I will not stop from seeing and honoring in the Roman Pope Francis  the rightful successor of Peter, so it saddens me at the same time that Jorge Mario Bergoglio sometimes shows,  through his actions in a “new telephone ministry"   that he does not seem to have problems with, more to be Simon. So clearly that some express even a terrible doubt, the other seems excessive, but precisely for this reason it would require a more thorough consideration: "Simon Peter Dethroned" (Mario Palmaro and Alessandro Gnocchi: Christ is Not an Option Among Many, and Certainly Not for His Representative on Earth - Why We Do Not Like This Pope , October 9, 2013). A Simon, who seems unable, among other things, to clearly decide to say yes, if it is yes and to say no, if it  is no,  in conscience,  that this is too much, but in these times, even the little, cometh  to evil ( cf Mt 5:37).
If you think so, then keep playing with the shell of the "Who does not understand?” in order not to  grasp   the real heart of the issue: "Who is it then, very clearly, who expresses himself so poorly?”

I will now try to explain who explains himself poorly in the part of the extract of a private conversation between me and a worthy brother priest and experienced theologian, the Dominican Giovanni Cavalcoli.
"(...) The worldwide success of the Pope is connected with the major currents and the heads of the powerful secularists, Freemasons, liberals, liberation theologians and modernists   -  in whom they are completely mistaken and fooled - hold him for one of their own. And he actually seems to be currently  not doing much to endeavor to elucidate this mysterious misunderstanding. On the contrary, sometimes one almost has the impression that he plays with this misunderstanding in an ill-considered and dangerous manner. On many occasions he is only on one side and neglects the other and appears to be one-sided and biased.   Just think of the provisional administration for the Franciscans of the Immaculate , who have been made ​​"guilty" - and we know - who have organized international conferences to dismantle the hazardous  theology of those stars of the Nouvelle Théologie,  starting with Karl Rahner ( for example ).  Felicitously they were supported in this highly meritorious task by Antonio Livi, Giovanni Cavalcoli, and so they were banished to their Indian reservation, where I will also be eventually forced into as well.
With painful sadness we have to say that the Pope speaks of progress, but not from the tradition, whose immobility that he criticizes,  not the historicism where he emphasizes the concrete,  not the universal, where he speaks of the subjective conscience,  not from the objective that he speaks of the praxis,  not from the doctrine, to the people,  not of the hierarchy, of the truth,  not of the heresy,  the Word of God,  not of dogma, of ecumenism,  not separate from the errors of certain brethren, of mercy, and not of justice. He quotes the Second Vatican Council, but not  Vatican I, containing the dogma among other things, that concerns him directly, nor  the Council of Trent, without which, neither  Vatican I nor Vatican Council II would have ever been possible.  He points the finger at certain fervent believers, calling them Pelagians, but seems to forget what theological and dogmatic precision, clarity and exactitude is found in St. Augustine's De natura et Gratia, reiterated in contradiction to what was equally outstanding was represented as heretical in a head like Pelagius'. Maybe he is trying to win people for Christ in this way. If he really think this, he is giving himself a pious illusion, which also tends to be very dangerous.”
Ariel S. Levi di Gualdo
First published: Riscossa Christiana
Introduction / Translation: Giuseppe Nardi
image: Riscossa Christiana
Trans: Tancred vekron99@hotmail.com

Link to Katholisches…
AMGD
Posted by Tancred at 12:53 AM