The Pope's Team has begun with a small budget and big aspirations.  The association wants to particularly care for street children

Buenos Aires (kath.net / CBA / pl) The "Sport Club Pope Francis," which was founded in honor of the head of the Argentine church football team, is in his first season. Having made its ascent to the finals, the "Pope's team" will play in the championship of the east Argentine city of Lujan  on 22 March in the Sixth Argentine League. The club, with a slim budget but high goals was founded in October last year. It bears the cross in iits coat of arms (photo).

Club President Jorge Ramirez said, according to Argentine media reports, the occurrence and the goals of Francis had convinced him to name the club after the Pope and not, as initially planned after Real Madrid. Even the district of Lujan, in which the "Sports Club Pope Francis' is located, is called San Francisco.

An essential task of the club is the social work, Ramirez said. The association wanted to particularly care for street children. Pope Francis probably will probably not be the last to appreciate the social work of the new football clubs. The Argentine Schoenstatt Father Federico Piedrabuena had described   his encounter with his former Archbishop Cardinal Jorge Mario Bergoglio shortly before his departure for follow-prone Conclave 2013  for kath.net. "We talked about football, because he [Bergoglio] is a big fan of San Lorenzo, as I am n a Racing Club," the Schoenstatt Father reportedly said. "I told him that I help Racing Solidario" [a large-scale social initiative of the Racing Club]. Bergoglio told him that this was "very important", "Look, it is not only necessary that we hope that people come to church in the parish." Likewise, it was necessary but, the future Pope said, "that we go beyond that we go to those places where people go. A football stadium, for example, is a place where many people go. We have to be present there."

Pope Francis is known to be  a football fan since childhood and previously visited football games with his parents. As Archbishop of Buenos Aires, he was a registered member of the Argentine first division "San Lorenzo de Almagro", a club from his home district of Buenos Aires, which owes its origin to a Catholic priest. Fanziskus shows repeatedly informed of the latest sporting events. During his nearly one-year pontificate he has already welcomed many footballers, while he will also always happily receive the respective jerseys. 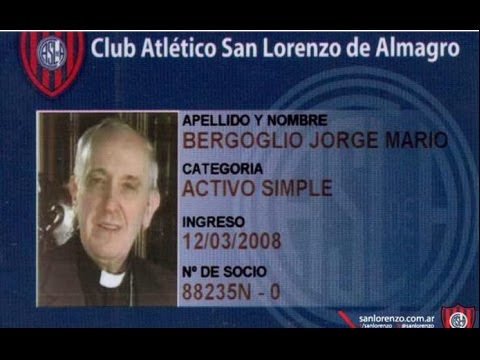 Pope Francis is a long standing member of the soccer club San Lorenzo, here's a photo of his membership card. 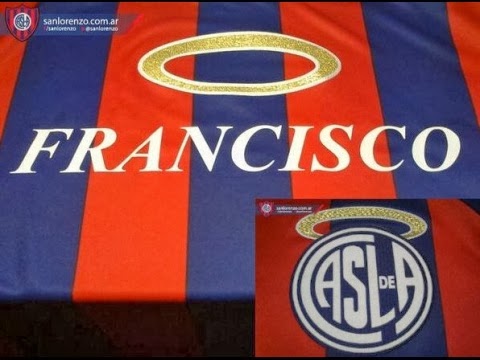 This jersey circulated after the election of Pope Francis: jersey of football club San Lorenzo with Pope names and halo