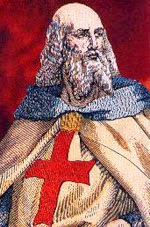 (Paris) exactly 700 years ago, on 18 March 1314, Jacques de Molay was burned in Paris at the stake as a heretic.  Jacob of Molay was the twenty-third and last Grand Master of the Knights Templar. The Order of Christ pauperes commilitones templique Salomonici Hierosalemitanis , the "poor comrades of Christ and of the Temple of Solomon in Jerusalem" was created in 1118 in the wake of the Crusades and united for the first time the ideals of chivalry with those of monasticism. For their motto, the Templars chose the psalm verse " Non nobis Domine, non nobis, sed tuo da gloriam nomini! (Not to us, O' Lord, not to us but to thy name give glory). "
The monk Knights were one of the most efficient, most legendary though to this day, the most controversial phenomena of Church history. The Muslims had already ruled the Holy Land for centuries.  As Christian pilgrims could no longer freely visit the holy places and learned of the destruction of the Holy Places, they prepared for the liberation of that area, which until the early seventh Century had belonged to the Eastern Roman Empire. However, Eastern Rome was too weak to defend themselves against the thronging Islamic armies. Initial impetus for the Crusades was a cry for help from Eastern Rome after the defeat of Byzantium by the Seljuks. A cry for help, which did not remain unheard in the West. In addition, the population of the Holy Land was still Christian at that time  to a considerable extent.

The protection of pilgrims was the first and primary objective of the Order. Even before, the Templars were Hospitallers, who took in  the pilgrims. Their vulnerability before Islamic attacks necessitated a whole new form of organization to arise, which took over its own military protection even in the Knights Templar. It was a form of organization, which was then followed by other orders, such as the older Order of St. John (Malta) and the Teutonic Order . The order won by numerous foundations and by a gallant alignment rapidly developed  through   an assembly of the Christian elite of Europe.  Its  military actions were carried out with more or less success.

From Europe to the Holy Land, it built a well-organized network of offices and hospices, to ensure protection and care of the departure of Christian pilgrims to the Holy Places. There were also organizational structures in Europe,  the costs  for the management of the Order’s properties, which significantly increased the hospice network and offices in the Holy Land, including the standing army were disputed. The headquarters of the Order was in Paris.

Protection of the Holy Land and Reconquista

In addition to the Holy Land, the Order also took part in the Reconquista, taking the Iberian Peninsula back from the Muslims. The main countries of the Knights Templar were contemporary France and England. Heartland was there then-border area between France and the Holy Roman Empire. Even Jacob of Molay was from this area. He was born was around 1244 in the Free County of Burgundy, which at that time did not yet belong to France, but the Reich. The chapter of the Crusader States  fell after 200 years of cost and supply shortage  under the blows of the Islamic troops. The Templars held until September 1302 with their final stronghold, a small island off the Syrian coast.
The high point of the Order of Knights of the Holy Land was the end of the 13th Century. The Hospitallers and the German Teutonic Order had developed territorial establishments  (Cyprus, Rhodes, Prussia, the Baltic countries) and it found new tasks.

Philip IV of France and the Threat of State Bankruptcy

The end of the powerful Templar Order, he was ultimately also fatal. France's King Philip IV the Fair (1285-1314) stood under the threat of  bankruptcy. Through the proclamation of a Crusade with simultaneous elimination of the Templar Order, he could make use of their assets and restore the state budget. A system of  thievery, which should apply to the foundation of Territorial States throughout history again and again. In contrast to the Church, the Order, however, was an armed force. So they  were battle-tested against the Muslims were so naively disposed to their opponents at home. The Papacy was weakened and fell into increasingly direct dependence of the French King. Since 1309, the Popes lived for several decades in the Avignon exile.

Weak Pope and Charges of Heresy

King Philip IV was successor,   Pope Clement V (1305-1314), a personal friend, who wanted to initiate the  approval of a trial of the Templars. In 1307  Philip IV of France was to arrest all Templars that could be taken down without resistance. The Order was then to have been put on trial for heresy. Even today, it seems to breathtaking to read the contrived indictment of the Order. The confessions were the  basis on which the conviction took place,  which were extorted by torture. Grand Master Molay confessed at the end of October 1307 after severe torture. On the 24th of December, however, in December of the same year he recanted his confession and implored his innocence. A position that he would not leave. Efforts  of Clement V to save the Order in any form, failed. Too weak to resist the king, he finally convened a council at Vienne, after 1310, Philip IV had begun in France with the demonstrative, public burning of Templars. The Pope put to death no Templar in his worldly dominion, which should underline that the oppression of the Order was originated by the King of France. The Council condemned  the Order in 1312  in a sensational trial. In the struggle between the papal and royal power, the Pope was subject and had to save his own authority, to some extent,  the Order was “put to the sword." Dante Alighieri put him in Hell for his "Divine Comedy."

With the bull Vox in excelso Clement V dissolved the order on 22 March 1312. After the Council, many brave knights of the Order recanted their forced confessions and protested their innocence. Thus  they were  burned as unrepentant heretics. . On 18 March 1314  Grand Master Jaques de Molay discussed  the judgment. At the end of the trial Molay then once and again reaffirmed with a loud voice, "before God and the world," his innocence and his unbroken loyalty to the Catholic Faith: "On the threshold of death, where even the slightest lie weighs heavy, I confess in face of heaven and earth, that I have committed a great sin against me and mine, and made ​​me  bitterly guilty of death  because  to save my life and to escape the excesses of torture, especially by flattering words of the king and the Pope, I was enticed to witness against my Orders and myself. But now, even though I know what fate awaits me, I will not lie to the old pile and by explaining that the order was always orthodox and pure of iniquities, I renounce happily  my life. " 1 On the evening of the same day,   Jacob de Molay  and the Master of the Order of Normandy on the Île de la Cité in Paris, the small island in the Seine, on which also stood the Cathedral of Notre-Dame du Paris, was  burned. A small plaque commemorates the scandalous miscarriage of justice.

The stigma and the unresolved legacy of the Templars

Other Masters of the Order remained imprisoned until their death. Alone on the Iberian Peninsula, where the Order in the Reconquista had done faithful service, there were acquittals. In Aragon in 1316 and in Portugal in 1319, the King founded the Order of Montesa and the Order of the Knights of Christ , in which the Knights Templar from all over Europe, as long as they were able to escape the persecution, gained admission and they were revealed to be Templars also in the symbolism, like the red cross of the Order. Both of the orders no longer exist today.
The failure of secular and ecclesiastical authority found  its visible peak in the execution Molay. It stands as an unrecognized flaw in Church history until today. It’s one reason why the Church never allowed the restoration of the Templars. While the Order of Malta and the Teutonic Order, to name the most famous, continuously persisted and therefore even today have their place in the Church, the Church rejects the renewal or restoration of the Templars. Completely without justification, Freemasonry competes with the legacy of the Knights Templar   in the anti-ecclesiastical sense. One more reason why the word Templar has long occupied a negative tone  in Catholic circles. In 2007, the Holy See,  made the acts of the trial of the Templars accessible. The study of documents confirmed the assumption that it was a legal scandal greatest magnitude.

Today, there are a number of recognized lay organizations, which rely on the tradition of the Knights Templar, without being able to claim to be successors.  Alongside this, however, there are also a variety of non-recognized associations which are aligned, in some cases, as anti-Catholic, Masonic or even Satanic.
Text: Giuseppe Nardi
image: Wikicommons
Trans: Tancred vekron99@hotmail.com
Link to Katholisches…
AMGD
Posted by Tancred at 7:51 PM