“In Order to Understand the ‘Aggiornamento’, One Must Dig Deeply.” -- All of the Journals of John XXIII. to be Published 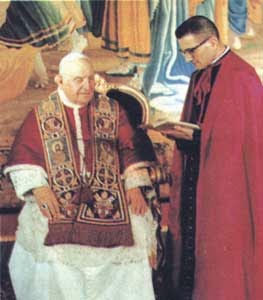 (Rome) Pope John XXIII. (1958-1963) who after years of silence is getting  new attention. This has led to the coincidence of two events: 50 years of Vatican II and the election of Pope Francis, whom some associate significantly with the counciliar Pope. These include the former secretary of Pope Roncalli, Monsignor Loris Capovilla,  who received his cardinal’s hat  from Pope Francis.  Cardinal Capovilla claimed recently that Pope Francis had originally even wanted to be called John XXIV.  This is a version that is doubted in Rome, but fits well in a particular image.
The elevation of the 93 year old Capovilla to cardinal as well as the wonderfully  loose canonization of John XXIII. next 27 April is regarded as Church policy efforts to satisfy those on the "progressive" side of the Church.  The pontificates of John Paul II and Benedict XVI are particularly criticized  as a "restoration attempt.”  Monsignor Capovilla is devoted to his literary work, especially the life and work of Pope Roncalli and in this context the Second Vatican Council .

Church Political Rehabilitation of the Conciliar Spirit against "Restoration"

The common canonization of Pope John Paul II  and the Conciliar Pope,  makes for less of a  "happy medium"  but the thwarting of  the canonization of the Polish Pope, whose process was so far advanced with the recognition of a miracle would have caused too much irritation with a delay.
In view of the unexpected canonization of John XXIII. the new and complete edition of all the diaries of Pope Roncalli has now been published. Copies of the annotated and edited edition will receive a selection of major libraries and all the Apostolic Nunciature of the world.

In order to understand the "secret" of "aggiornamento", one must dig "very low" in his life

John XXIII. left numerous personal records, including especially his appointment calendars, diaries and notes.Cardinal Giacomo Lercaro, then Archbishop of Bologna, and one of the progressive spokesman for the council said that one to the "secret" John XXIII., That is his program of " aggiornamento to understand "the Church," very low "in its life before he became Pope "dig" should.
Last Saturday, a ten-volume new work was presented at the named after the council Pope hall of the Curia of Bergamo, collecting diaries and diary Roncalli since his youth. The publication was printed in an edition of 300 copies and will be distributed to selected individuals and libraries. Nunciatures at all, the most prestigious libraries and certain libraries in symbolic places such as Tübingen and Louvain, Hiroshima and Nagasaki

"School of Bologna" is Responsible

The publication was carried out by the Foundation Giovanni XXIII of Bergamo, the Diocese of Bergamo and the Institute of Religious Sciences of Bologna, is related  school of Bologna is related to a progressive interpretation of the Council.  The head of the school of Bologna, the Church Historian Alberto Melloni then also will be one of the speakers at the presentation. The Republic of Italy promoted the publication as a contribution to "national heritage".
The ten volumes are primarily based on the archives of the School of Bologna, the Holy See, the postulation for the canonization process and now headed by Cardinal Capovilla. When presenting, smaller excerpts were presented, including a diary during his time as nuncio in Turkey (1935-1944) about the Turkish people:

"I love them in Jesus crucified and it is painful that Christians speak so ill about them and thus prove how little the gospel has penetrated into their souls. I love them, because the part of my office is, as a father, as a shepherd and as Apostolic Delegate: I love them because I believe they are called to salvation. I know that the spirit of many of my Western Catholic children is against me. But this has neither disturbed me nor discouraged me "(entry of 27 July 1936).

I wonder if the Third Secret of Fatima is in them?

Pope John XXIII was definitely traditional - he insisted on Latin as the language of the church and its liturgy and the three years of preparatory work for the councils was effectively trashed by the liberal modernist putschists. He certainly had no intention to put in place a liberalist revolution.
Let's get this straight - the sequel was a revolution not a reform and it absolutely had nothing to do with restoration.

The Bolognese School certainly claims him, and it was he, after all, who changed the canon by including St. Joseph.

John XXIII was certainly naive and looking for a renewal in some form but his insistence on Latin and removal of Bugnini from his position on the liturgical commission provide evidence for his commitment to a mostly orthodox approach. I would assess that because the liberal modernists were gaining ascendancy, concretised in the arrival of Montini as pope and Bugnini's return then he opened the doors to something he did not understand.

The changes to the Holy Week regimens under Pope Pius XII were more significant than adding one very important saint to the Canon. I suggest if we accuse John XXIII of being a modernist then Pope Pius XII gave the modernists plenty of elbow room himself to transform the liturgy enough for the liberals to hope for their ultimate aim - vernacular liturgical praxis with a form to match it. Bugnini thrived during his pontificate.

"Mediator Dei" leaves no room for doubt as to which course should be followed: ‘Strive earnestly, by methods and means which your prudence judges most effective, to bring about a close union between clergy and laity: that the faithful may take so active a part in the liturgy that it becomes really a sacred action in which both priest — especially the priest in his own parish — and people join in offering to Almighty God the worship which is His due’.

Pius XII wasn't perfect, but then neither was St. Pius X.