German Papal Advisor: "No Mission to the Jews" --- Good Friday Prayers for the Jews "Problematic" 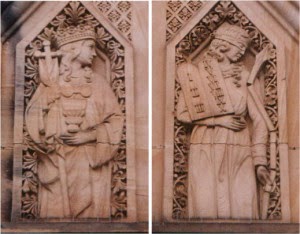 (Bonn / Rome) The German Fundamental Theologian  Gregor Maria Hoff is the new advisor to Pope Francis on Judaism. Last 20 February he was appointed Advisor of the Pontifical Commission for Religiosu Relations with Jews founded in 1974 by Pope Paul VI.. Hoff is Professor of Fundamental Theology and Ecumenical Theology at the Catholic Theological Faculty of Paris-Lodron University in Salzburg. He already belongs to the Sub-Commission for Religious Relations with Judaism of the German Bishops' Conference. This is  followed by the appointment  to Rome, where he takes the place of the Aachen theologians for Ecumenism, Hans Hermann Henrix. The preliminary discussions, said Hoff in an interview with the Deutsche Welle, had already begun in mid-2013, soon after the election of Pope Francis.
Gregor Maria Hoff Papal Consultor to Judaism
The Commission, which was created in the aftermath of the Conciliar Constitution of Nostra Aetate  in 1965, is concerned among other things, with the preparation of the Pope's trip to the Holy Land. Otherwise the task belongs, says Hoff,   to  the Commission, especially that of drawing "significant documents" that bring "expression to the positions of the church, the pope and the Vatican to Judaism".
One of the topics with which Hoff is concerned as the Fundamental Theologian and now as Pope Consultor, is the question of "whether the evangelization of the Jews may be an issue for the Church." Because, says Hoff apodictically : "The Catholic Church is operating no mission to the Jews." Pope Francis is supposed to have said, says Hoff, in his Apostolic Letter Gospel Gaudium   "emphasizes that God continues to act in the people of the Old Covenant, therefore that God in his covenant first chose the Jewish people of Israel." Other issues facing the theologian and ecumenicist concerns, "Trinity and monotheism."
2015: 50th Anniversary of Nostra Atetate - Francis "Rethinks" Good Friday "Hopefully"
The Roman Commission would have to deal with the  "fifty year anniversary" of Nostra Aetate, which is celebrated in 2015. This conciliar Constitution had "meant a very large incision". Because "since then the relations between the Catholic Church and Judaism have changed dramatically," said Hoff. This applies "especially in Germany," where the relations are  "very good and intense".
During the pontificate of Pope Benedict XVI. there were "even irritations", due to the reformulation of the Good Friday prayer for the traditional rite. Hoff holds the new version as "problematic" and "hopes" himself "that he thinks this phrase will be revised again by Pope Francis."  It doesn't mean it's a "real burden" in places.  The relationships were "so good" that one "such irritation can be settled  between us."
The "importance of the State of Israel's existence," because of the "theological significance of the country" imposed "election of the Jewish people" and the "question of the existence of the State of Palestine as well as the human rights issues"... "is a very sensitive matter, which touches part of the theological issues," said Hoff.
Pope to Visit Israel, not the Holy Land
Hoff in his interview with Deutsche Welle never spoke of  a trip of Pope Francis to the "Holy Land", but only about a "trip to Israel." On this trip "to Israel"  it will be shown, which accents the Pope "will set".  "Francis will certainly be good for the Catholic-Jewish relations," assured the German Fundamental Theologian and pope consultant. This would have been previously shown in his "very strong personal relations with the Jewish community in Buenos Aires".
Hoff believes that the Pope would bring in "Israel" a "certain" climate in the talks and will make a "programmatic" statement with the contents: "God continues to act in the people of the Old Covenant."
Otherwise would the Pope in the Middle East issue take any particular position. He would then only be "lost in the nettles" said Hoff.
Text: Giuseppe Nardi
Image: Strasbourg Cathedral
Trans: Tancred vekron99@hotmail.com
Link to Katholisches...
AMGD
Posted by Tancred at 11:20 PM

Birds of a feather, flock together...

Yeah maybe someone should have let Him know before He spent all that time with them when He was twelve.

He obvious never read The Bible, especially the Acts of The Apostles.

Always amuses me that even the Joos have more fear and knowledge of the power of the Holy mass than today's modernist faux catholics.

The Pope of the Catholic faith worries about Jews but throws traditional Catholics under the bus. He will make more scandal in the Holy Land, umm...I mean Israel. No converts allowed thanks to Freemason ecumenism

The Jews are not Christians.
It is clear that the current leader of the catholic church has little interest in whether or not Jews convert to Christianity.
Pope Francis,s statement that God retains his covenant with the Jewish people is certainly heretical.

Just who is leading the catholic church at the moment?
Can he called the "Vicar of Christ"?
Can he even be called a "catholic"?

The more I watch this dangerous spiritual lunatic the more I am inclined to
answer in the negative to the above questions.

I blogged about why this matters. Then I came to my senses and linked to you with a picture of The Holy Medal of St. Smiley to contemplate instead. I'm completely on board with the two-track Old/New Covenant secret mission Gentile Savior with Jewish Messiah still waiting in the wings theology of the Church. And we should definitely not say anything that could offend someone, like prayers. Oh, and I'm all for letting non-Catholics write our liturgy for us. I realize what a courageous stand this is, but don't thank me. I just follow the lead of my betters.

Why the Church insists on blurring the already clear traditional understanding between the Church and the Joos is beyond me.
Modern Joodaism is a man-made religion, it is the Catholic Church that is the continuation of the Jewish temple worship, fullfilled in Christ.
The Church has always known this and taught this... why they insist on confusing everyone about it and confirming the modern Joos is beyond me. All it does is confirm them in their errors and prevents them from finding Christ.

It would likely be for the same reason Pius XII after attacking the Nazis, suddenly maintained a silence against them when it became clear their ambitions and actions- He feared their retaliation upon others for his just condemnations of the Nazi regime.

There are sizeable so-called Jewish lobbies with a lot of political clout and who own a lot of mainstream media who would threaten the Church, threaten her institutions and even turn the world against the Church simply on ridiculous charges of puffed up anti-Semitism where there is actually none. But it's just an equal equivalent of the word 'homophobe' that is designed to silence opposition through Pavlonian conditioning while ignoring actual anti-Semitism.

This fear of erupting such relations is understandable, but unfortunately language looking to be at first 'sensitive' has been turned into an error of believing the Jews don't need to convert.

Continuation of the Post-conciliar myth of the validity of the Old Covenant. yet another modernist compromise and fudge. JP II was one of the worst perpetrators of this hoax. The liberal church is increasingly falling under the Judaic thumb. The Neo-Catechumenal Way has been allowed to get away with invalid liturgy and all its other excesses because it is emphatically Judaeo-centric. It is significantly illustrative of the official line: do nothing to upset the Jews.

Does this mean we can become a different Faith and its ok?

Serious question: does anyone know of any actual Church teaching that asserts the viability of the Old Covenant for Jews? Where are they getting that?

This article by Arnaud de Lassus, which appeared some years ago, has much valuable information on the matter. It is longish, but well worth the read.

a question to qualified exegetes of the Catholic persuasion out there - is there Truly any hint in sacred tradition-history-scripture that Christ intended that the Mission would end while the world rolled on?


Not from Pope Pius XII Mystici Corporis Christi:
And first of all, by the death of our Redeemer, the New Testament took the place of the Old Law which had been abolished; then the Law of Christ together with its mysteries, enactments, institutions, and sacred rites was ratified for the whole world in the blood of Jesus Christ. For, while our Divine Savior was preaching in a restricted area - He was not sent but to the sheep that were lost of the House of Israel [30] - the Law and the Gospel were together in force; [31] but on the gibbet of His death Jesus made void the Law with its decrees [32] fastened the handwriting of the Old Testament to the Cross, [33] establishing the New Testament in His blood shed for the whole human race.[34] "To such an extent, then," says St. Leo the Great, speaking of the Cross of our Lord, "was there effected a transfer from the Law to the Gospel, from the Synagogue to the Church, from the many sacrifices to one Victim, that, as Our Lord expired, that mystical veil which shut off the innermost part of the temple and its sacred secret was rent violently from top to bottom." [35]

I get a domain not found message.

See the video clip on Gloria Tv of the Rabbi in Buenos Aires being honoured by Cardinal Bergoglio and on acceptance of theaward saying explicitly to applause that the Messiah had not yet come.

It looks as though the Apropos site is down although it was all right a couple of days ago. You can also find the article on the Eye-Witness site where aged parent has been posting it in instalments.

This link seems to be working now

THE JEWISH MASONS CONTROL THE VATICAN..PERIOD !

I Interesting post. I have been wondering about this issue,so thanks for posting. To get new information visit here
Geldanlage
sichere Geldanlage
Unternehmensbeteiligungen