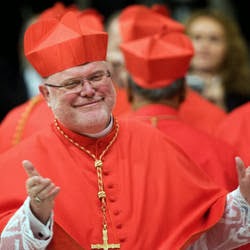 (Bonn) At the meeting in Münster Spring Plenary Meeting of the German Bishops' Conference , Cardinal Reinhard Marx was chosen as the Archbishop of Munich-Freising, as expected, to be their new President Cardinal Marx, in the power of consciousness it is said, he has actually become presently the most influential religious leader in Europe. The term of office for the DBK President shall be six years.
The Archbishops of Munich and Freising and Cologne are traditionally contenders for the presidency of the DBK. Exceptions, such as the appointment of Cardinal Karl Lehmann (Mainz) and Robert Zollitsch (Freiburg) were expressions of complex internal conflicts between the bishops, but also with Rome. The archbishopric of Cologne is currently vacant, and therefore the largest German diocese could assert no influence in the election.
Cardinal Marx has been Chairman of the European Bishops' Conferences (COMECE) and as a member of the European representatives was appointed by Pope Francis to his C8 Cardinals' Advisory Committee. By choosing Cardinal Marx as DBK President, he has finally become the most influential religious leader in Europe.
In the conflict over the admission of remarried divorcees to Communion,  Cardinal Marx had intervened  last fall publicly against the Prefect of the CDF, Cardinal Gerhard Ludwig Müller.   Müller had criticized the Freiburg Circular  for Family Ministry and recalled the Church's teaching on the Sacrament of marriage. Cardinal Marx evaluated Müller's opinion as an attempt to "end the discussion" and refused.
Archbishop Marx was elected on the fourth ballot, with "wafer-thin majority" (FAZ).
Text: Giuseppe Nardi
image: Vatican Insider
Trans: Tancred vekron99@hotmail.com
Link to Katholisches...
AMGD