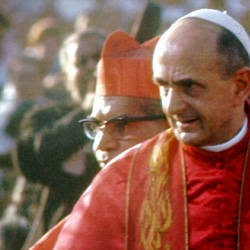 
Of note from an interview with Alice von Hildebrand lifted frome the blog LES FEMMES:

AVH: But he did! I shall never forget the private audience we had with Paul VI just before the end of the [Second Vatican] Council. It was on June 21, 1965. As soon as my husband started pleading with him to condemn the heresies that were rampant, the Pope interrupted him with the words, “Lo scriva, lo scriva.” (“Write it down.”) A few moments later, for the second time, my husband drew the gravity of the situation to the Pope’s attention. Same answer. His Holiness received us standing. It was clear that the Pope was feeling very uncomfortable. The audience lasted only a few minutes. Paul VI immediately gave a sign to his secretary, Fr. Capovilla, to bring us rosaries and medals. We then went back to Florence where my husband wrote a long document (unpublished today) that was delivered to Paul VI just the day before the last session of the Council. It was September of 1965. After reading my husband’s document, he said to my husband’s nephew, Dieter Sattler, who had become the German ambassador to the Holy See, that he had read the document carefully, but that “it was a bit harsh.” The reason was obvious: my husband had humbly requested a clear condemnation of heretical statements.

TLM: You realize, of course, Doctor, that as soon as you mention this idea of infiltration, there will be those who roll their eyes in exasperation and remark, “Not another conspiracy theory!”

AVH: I can only tell you what I know. It is a matter of public record, for instance, that Bella Dodd, the ex-Communist who reconverted to the Church, openly spoke of the Communist Party’s deliberate infiltration of agents into the seminaries. She told my husband and me that when she was an active party member, she had dealt with no fewer than four cardinals within the Vatican “who were working for us.”


And also, she wrote about the controversial, but never refuted book of Don Luigi Villa which, it is said in some circles, irrevocably torpedoed the cause of Paul VI's canonization:

AVH: The two books I mentioned were published in 1998 and 2000 by an Italian priest, Don Luigi Villa of the diocese of Brescia, who at the request of Padre Pio has devoted many years of his life to the investigation of the possible infiltration of both Freemasons and Communists into the Church. My husband and I met Don Villa in the sixties. He claims that he does not make any statement that he cannot substantiate. When Paulo Sesto Beato? (1998) was published the book was sent to every single Italian bishop. None of them acknowledged receipt; none challenged any of Don Villa’s claims.

In this book, he relates something that no ecclesiastical authority has refuted or asked to be retracted – even though he names particular personalities in regard to the incident. It pertains to the rift between Pope Pius XII and the then Bishop Montini (the future Paul VI) who was his Undersecretary of State. Pius XII, conscious of the threat of Communism, which in the aftermath of World War II was dominating nearly half of Europe, had prohibited the Vatican staff from dealing with Moscow. To his dismay, he was informed one day through the Bishop of Up[p]sala (Sweden) that his strict order had been contravened. The Pope resisted giving credence to this rumor until he was given incontrovertible evidence that Montini had been corresponding with various Soviet agencies. Meanwhile, Pope Pius XII (as had Pius XI) had been sending priests clandestinely into Russia to give comfort to Catholics behind the Iron Curtain. Every one of them had been systematically arrested, tortured, and either executed or sent to the gulag. Eventually a Vatican mole was discovered: Alighiero Tondi, S.J., who was a close advisor to Montini. Tondi was an agent working for Stalin whose mission was to keep Moscow informed about initiatives such as the sending of priests into the Soviet Union.

Add to this Pope Paul’s treatment of Cardinal Mindszenty. Against his will, Mindszenty was ordered by the Vatican to leave Budapest. As most everyone knows, he had escaped the Communists and sought refuge in the American embassy compound. The Pope had given him his solemn promise that he would remain primate of Hungary as long as he lived. When the Cardinal (who had been tortured by the Communists) arrived in Rome, Paul VI embraced him warmly, but then sent him into exile in Vienna. Shortly afterwards, this holy prelate was informed that he had been demoted, and had been replaced by someone more acceptable to the Hungarian Communist government. More puzzling, and tragically sad, is the fact that when Mindszenty died, no Church representative was present at his burial.

Another of Don Villa’s illustrations of infiltration is one related to him by Cardinal Gagnon. Paul VI had asked Gagnon to head an investigation concerning the infiltration of the Church by powerful enemies. Cardinal Gagnon (at that time an Archbishop) accepted this unpleasant task, and compiled a long dossier, rich in worrisome facts. When the work was completed, he requested an audience with Pope Paul in order to deliver personally the manuscript to the Pontiff. This request for a meeting was denied. The Pope sent word that the document should be placed in the offices of the Congregation for the Clergy, specifically in a safe with a double lock. This was done, but the very next day the safe deposit box was broken and the manuscript mysteriously disappeared. The usual policy of the Vatican is to make sure that news of such incidents never sees the light of day. Nevertheless, this theft was reported even in L’Osservatore Romano (perhaps under pressure because it had been reported in the secular press). Cardinal Gagnon, of course, had a copy, and once again asked the Pope for a private audience. Once again his request was denied. He then decided to leave Rome and return to his homeland in Canada. Later, he was called back to Rome by Pope John Paul II and made a cardinal.

The rush to canonize the post Vatican II popes is an obvious example of political and ideological warfare in the Church. There is simply no other explanation for the drive to canonize JPII and now Paul VI, other than the desire to "canonize" the II Vatican Council.

It will be a miracle if Vatican II is abrogated. Keep praying!

The real miracle is that the Church didn't instantly implode during Paul's reign.

This is simply ridiculous. If this is the best they can come up with for a "miracle" - a misdiagnosis by a doctor - then these people are truly desperate.

Seems there's more evidence against than for.

Nearly 400 years elapsed between the canonizations of Popes (Pius V and Pius X). Now, the Pope who engineered the Revolution in the Church and Pope who institutionalized it (nearly successive Popes -- save for the 33 day reign of JP I in between) are about to be declared Saints?

This is the political canonization of the Revolution.

@Alex Long, it's much easier to believe that Gregory the Great was a saint than Julius II. There are many significant details in Paul VI's biography that are very troubling.

I have to say this is a little strange. Many children are misdiagnosed in the womb and their mothers encouraged to abort them by their "doctors". I know here in Ireland a faulty scanner was in operation for years and expectant mothers were told their children were dead. No proper investigation into possible cases of misdiagnosis was done. The "Health" Service Executive claimed that it was "unnecessary".

It was not just one faulty scanner. Nor was it just some isolated operators. A friend of mine who was a GP, saved many babies' lives that had been threatened by drugs given to the mothers to induce expulsion of the "dead" babies. Some refused to take the drugs after having been told their baby was dead, whilst others had the effects of the drug reversed by intervention.

Could that be Francis' mission?