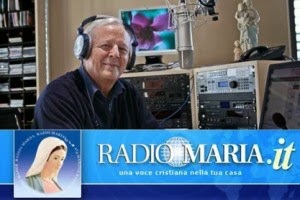 Update: here is the exchange between Dr. Mattei and the program director, Father Livio at Rorate.

(Erba) The layoffs at Radio Maria continue to roll. Now the famous historian, Roberto de Mattei's coooperation has been terminated because of his "critical attitude" towards Pope Francis.

Last fall, Mario Palmaro and Alessandro Gnocchi were dismissed and their broadcasts cancelled. Both the legal philosopher Palmaro and the Catholic publicist Gnocchi made their own broadcasts on Radio Maria Italy: Palmaro had the show "Encounters with Bioethics" and Gnocchi the program "People and Literature. Encounter in the light of the Gospel." Both belong to the most astute Catholic intellectuals of our time. On 10 October 2013 they collaborated together with an article in the daily newspaper Il Foglio, under the title "The Pope Does not Like Us", an accentuated criticism of the previous pontificate of Pope Francis published (see German text Christ is Not an Option Among Many, and Certainly not for his Deputy on Earth - Why We Do Not Like This Pope ). On the same day they were therefore were shown the door by program director Father Livio Fanzaga. "Father Livio is of the opinion that one can not simultaneously be a presenter of Radio Maria, and criticize the Pope," is what he told the dismissed workers.

Now Radio Maria has also separated itself from historian Roberto de Mattei. Unlike Palmaro and Gnocchi, who were already engaged during the pontificate of John Paul II, by the largest Catholic radio stations in Italy, the historian Roberto de Mattei was employed first under Benedict XVI. at the Catholic station. Since the 17th In February 2010, he produced once a month the broadcast of "Christian Roots." With the start of his broadcast Radio Maria grew close also to the traditional Rite. Since then, the broadcaster has transmitted the Holy Mass in the Old Rite.

But since the pontificate of Benedict XVI. is over and since then, break lines are forming. The reason for the termination of the collaboration is the recent essay by Roberto de Mattei "Motu in fine velocior", on 12 February of Corrispondenza Romana has been published (see German [Soon to be translated] text Roberto de Mattei: The End of Civilization - "Whoever Loves The Church, Defends Her").

Wow, it seems like Pope JPII or Pope Benedict could be criticized all day long and nothing would happen but all of a sudden the more 'progressive' Pope cannot be questioned at all.

That's the end of Radio Maria!

Disgraceful that people are being attacked and penalised and defamed for speaking the truth, and defending the unchanging Deposit of Faith. And still the unfounded suppression of the FFI continues. Blessed Michael, the Archangel defend us in the hour of battle ...

I have this idea (forgive me) that Peter is no longer praying arms outstretched before the face of God to hold back the full-blown satanic attack in course which has now taken possession of minds, hearts, institutions and their praxis everywhere including "good churchmen" frightened to take a stand....and as de Mattei wrote ...it is accelerating ....no one will be able to avoid the whirlwind of disorientation and devastation ...we have to make our decisions when we still can....

We have arrived at a state of such chaos and decay on all fronts that ONLY a divine intervention can save us...where is the hope in human leaders with some degree of integrity? Someone tell me if there is one...even one such person...

I pray for Pope Francis, but as I've said before...the way he speaks and behaves now does not make me feel safe...and I should be able to say it without being called an unfaithful Catholic to the Pope...

Prof. Roberto de Mattaei is a prophet in my view. Thanks are due to him for saying the truth that needs so much to be told. The text of his article, in English translation at Lepanto Foundation (liked by Rorate) should be a must read for all.

De Mattei was right to remind us of the amazing lighning that befell St. Peter's on the day of Benedict XVI's resignation. What could be a worse Omen than that? Well, perhaps a crow or a seagull swallowing the Holy Spirit released by the Pope but how likely is that?

Another prophet of our times was Fr. Malachi Martin who in 1996 published a novel called Winswept House on a Vatican/Masonic plot to force the pope to resign. The amazing thing is that it actually came to pass and no one seems to remember Windswept House. Has anyone here read it?

Windswept House was prophecy of a sort. Fr Martin knew a lots about what really goes on at the highest levels in the Church.

I think it would make an excellent film since the book is a great read but needs tightening here and there - are there any young adventurous filmmakers out there who could do this material justice?

The world would be interested, even though it's recent (past) history - it feels current and timely.

"We have arrived at a state of such chaos and decay on all fronts that ONLY a divine intervention can save us...where is the hope in human leaders with some degree of integrity? Someone tell me if there is one...even one such person..."

There are still some in the College of Cardinals. I am sure they are most unhappy and displeased by this Pope Francis. Even though Benedict XVI resigned, everyone agrees that he was maneuvered out, pressured out by a coup of radicals, who wanted Bergoglio in the 2005 conclave....and this time around in 2013, insured that he got in. I would not at all be surprised if it was all a set-up to get rid of the great Benedict XVI-scholar, poet,theologian, and great leader of high standards and culture.
What we have now is a coarse, undereducated, mediocre, crude person of bad taste, bad judgement and warped agenda and mindset. His advisors and cheerleaders are likewise.
Although it is wrong to pray for someone's demise, when Francis goes, he will not be succeeded by a like minded person. There will be such a reaction by real Catholics who have held their tongues, that someone exactly the opposite of Francis, and more like Benedict XVI or even a Pius XII will succeed Francis.
Approaching 78, it is only a matter of 2-3 years before we see a conclave again, especially since (as many know), Francis is not in especially good health, not even as good as Benedict XVI who is 87!
Let us pray that with 1 year down already,we don't have too many left to suffer the radical agenda of Pope Francis....and when he is gone shortly, a great Pope of tradition will step out on the balcony of St. Peter's.....someone we will all cheer....someone the liberals will loathe and fear. And rightly fear because he will act....and will be young enough to get the job done once and for all.

What a horrid depiction of Our Lady. Isn't it a Medjugorie image?

I wrote to Prof. de Mattei to thank him.

Thank you Anonymous 8:13. Yes you are right of course there are some good churchmen around still ---probably more than we can imagine...but are who are they? Any names? Are they brave? Are they in a position to really do something effective?

Have a good Sunday everyone - in a way it's a great time to be Catholic!

Radio Maria reminds me of EWTN, and their nauseating commentators who hung on every word uttered by John Paul II and approved and cheered his every scandalous departure from Catholic traditional belief (Assisi apologies, perpetual travels, liturgical aberrations) Theirs was a perpetual whine of " yes Holy Father !!"" "Whatever you say, Holy Father!!!" UGH.

BY the way, Mother Angelica cloister of nuns who apparently flocked to her so that they were over 42+ nuns at one point is now down to barely 15.
What happened? Did faithful Catholics finally realize that they were only a bunch of cheerleaders for a "proper" Novus Ordo....but no to real Catholicism?

Yes, we have read and re-read Windswept House and it is everything that we are seeing today. Little could Malachi Martin, who passed away before John Paul II, know that the Lord would not let the conspirators dethrone His Divine Mercy Pope.
Unfortunately, they found a way to do to Benedict what could not be done to JPII. Benedict could claim health reasons all he wants, but as someone mentioned his health is as good or better than Francis' and in hindsight to the sufferings of JPII, Benedict's claims do not hold weight.
His forced resignation has finally brought us to the point that not only Windswept House points out as the enemies of the Church believing they finally have her defeated, but is probably also Providential in that the Lord has a timetable to let all this mischief happen.
This, however, is the proverbial last straw. The imposter who leads us to the antichrist is now on the dethroned Throne of Peter.

Your last paragraph is very unnerving...and should be very frightening to any faithful Catholic. Those from the very highest position in the Church are leading us to embrace the world of evil, and encouraging us to discard the truths of the Faith. Benedict XVI did the opposite. He tried to restore the Faith.
The reign of the "imposter" we now have will not be long.....much to the sorrow of the radicals flocking to him and copying his words and actions now.
The media will go into mourning, but faithful Catholics will thank God. We won't rejoice, because it is evil to rejoice at someone's death. But we will be thankful that the Throne of Peter will be occupied by a real Pope again.

Sorry, I misread what you said! I read it as MM died before John Paul II came to be.

Lynda: not a problem; How little we really know about MM's death, in which some say his last words were that he was "pushed" before falling, which led to his ultimate death. You are one up on me regarding the Jesuit book and one that sounds like we should all be reading it now.
Interestingly, before he died, it is reported he had a private meeting with John Paul and from there began to work on a book that would never see the light of day. He entitled iy, Primacy: How the Institutional Roman Catholic Church became a Creature of the New World Order. Martin claimed it would be his most revealing and important book of his life. Is this, perhaps, why he "fell"?

"The Jesuits" is available on Kindle, or can be bought through Amazon. It's a wonder Malachi Martin lasted as long as he did given his knowledge about the evil powers at work in the Church, and that he had such a wide audience. May he rest in peace.

I am a faithful Catholic who does not espouse the teachings and heresies of DeBrogglio. I welcome a break between the heretical followers of this heretic (DeBrogglio) and the faithful catholics world wide to embrace the traditional mass, dogma and catechism. I look forward to a new Pope who will truly take over the reigns of our church, and look forward to this imposter pope being turfed as he so much deserves.