Francis writes among other things: Yet when an economic power only produces value ​​for individuals and it deprives others, it creates inequality
Rome / Milan (kath.net / CBA) Pope Francis has contributed a preface to  a new book by the Curia Cardinal-designate Gerhard Ludwig Müller. The work of the Prefect of the Congregation is entitled "Arm for the Poor" which will be presented on Tuesday in Rome.

In the essay, which is published in advance in the Italian newspaper "Corriere della Sera" (Wednesday), it is said that money is to be a "good way" to enlarge the freedom and capabilities of the people and to allow it toward  good works in the world. However, if an economic power only produces value only ​​for individuals and it deprives others, it creates inequality.
In this case, the money loses its initial positive value, says Francis. It then ultimately turns against the people. Money and economic power would become an instrument that "turns people away from  people and restricts them to a self-centered and selfish horizon. In contrast, solidarity is asked for that it becomes  a "vital virtue to life."
The Pope urged a new connection between profit and solidarity. There was a "fertile cycle between profit and gift-giving, the attempts to break and occlude sin."  Christians should "rediscover this valuable and original unit of profit and solidarity,to live it and proclaim to all."
The word poverty spontaneously resolves upon discomfort and refers to something bad, writes Francis. The West identifies poverty with the lack of economic power, but there are is also physical, mental, social and moral poverty. [Liturgical poverty, too] Human life depends not only of goods.
People should be able to count on each other. It should be clear that each person is valuable.    Rather, social life in which public welfare remains not only an empty and abstract word should be questioned. This could only be achieved through genuine repentance, wrote Pope Francis.
In the Summer of 2012  Pope Benedict XVI. (2005-2013) brought a native of Mainz, the dogmatist and Regensburg Bishop Müller to Rome and made ​​him his principal theological consultant and head of the central authority of the Curia. Müller knows the Church and Theology in Latin America well, and was one of the first prefects Pope Francis confirmed in office.
During the World Youth Day Rio 2013 visited Pope Francis at his own request Rios slum Varginha 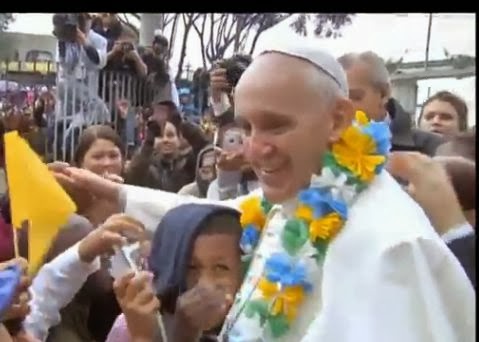 It's FOREWORD, not "forward".