Pastor Removes "Volksaltar" From His Church -- The Reaction 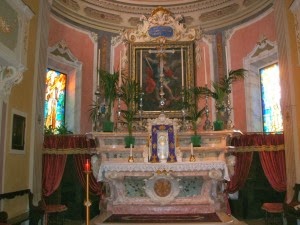 (Rome) A pastor has spectacularly restored his parish church which dates from the 18th Century, and then removed the "volksaltar." In architectural, aesthetic, and especially liturgical respects, he reasoned that it was  a mandatory step.  Because of the Church's climate, however, it is an almost "revolutionary," courageous step.
The Italian Archdiocese of Modena in the Po Valley was rocked by a major earthquake in 2012. Two priests died in their churches under the cascading debris. The pastor of the parish of San Michele Arcangelo of Montale Rangone, is Canon Andrea Gianelli,  who restored his parish superlatively and removed  the people's altar on this occasion. The priest, who had been ordained in 1970, is said to have been encouraged  by Pope Benedict XVI. for some time as concerns liturgical questions. The restoration of the earthquake-damaged church would then have been an occasion for him  to act.

The intrepid and well-known in his diocesan priest had sent the church newspaper of his archdiocese, the reasons for his decision,which was printed in its entirety on 15 December 2013. The pastor explained how it is generally understood that the priest prays in persona Christi at the altar "and sacrifices, as Jesus Himself would offer sacrifice to God the Father. Thus, the attitude of prayer also changes physically, because it occurs in a direct relationship to God. Even the people pray, but not directly, but through the ordained priest, who says the Eucharistic Prayer alone for this reason. The people hear him and are  united with him in the end by the Amen. The people worship and unites with  his sacrifice, but also his joys in the sacrifice of Christ, but this part of the Mass is essential priestly. It follows necessarily that all are oriented towards the Lord. Not surprisingly, it is called in response to the invitation to lift up our hearts: We lift them up to the Lord."

No Obligation For "People's Altar"

Canon Gianelli then illustrated, referring to Pope Benedict XVI.,  that the direction of prayer for the Church was always East from the beginning, "which is almost 1950 years long," which speaks of an "authentic tradition." "It is a mistake to think that Jesus had looked at the Last Supper toward the apostles, as if he were sitting in their midst. The famous Last Supper by Leonardo da Vinci, which many artists have followed, mediated a false picture of those events as studies clearly. "The Second Vatican Council doesn't say anything about a people's altar and a prayer towards the people," just as much as it says  that the Latin language of the Church was abolished, but rather put it specifically states that it is to be preserved." The Congregation for Divine Worship made ​​it clear in a document of 2000 that there is no compulsion or obligation to prepare a "people's altar".

Church Newspaper: Is a Change of Practice "Opportune"?

However, the church newspaper added a comment. It was the decision of the canon, who was consecrated in  1970, which not only wasn't criticized, but expressly praised. In praising, it was acknowledged that in his reasoning for the three places of celebration in the Novus Ordo  (chair, lectern, altar), but also his emphasis that the Eucharistic Prayer is a prayer direction and in a double sense is "oriented."
The church newspaper described the decision as "totally permissible and lawful" because they have violated neither a legal nor a liturgical provision. However, the diocesan paper then raised the question whether it was "opportune," to celebrate coram Deo  after celebrating "50 years" facing the people.  For a justification, the church paper said that with a celebration ad populum, the Eucharist can be "observed."

"The reasoning is completely baseless," said Messa in Latino , "because 50 years is not a  sufficient span of time for the Church  to derive a liturgical customary law.  In addition, the reason for the direction of prayer is not the Eucharist, which is also observed in the traditional form, but turning to God, the sacrificial character instead of the character of a meal, the symbolic meaning of the altar cross, the priest and the people are facing and not facing each other, in order to face the East  of the returning Christ, the Sun of Righteousness. "
In addition, they are astonished at the sudden reverence for the Holy Eucharist, "since otherwise there is  heard no criticism, however, that  the tabernacle is not relegated to a few churches, new and old,  in dark, secluded corners," said Messa in Latino . "The laudable example of Canon Gianelli shows that even priests ordained in the New Rite and celebrating a life in the New Rite have been able to identify and rethink undesirable developments through their involvement with the liturgy."
"Will the Ordinary accept the pastor's step?" Asked Messa in Latino . The faithful have accepted him. The removal of the  volksaltar  has,  says canon Gianelli, been the occasion in his parish for some discussion. He had, however, explained his decision in detail and the believers seem to have understood it.
Text: Giuseppe Nardi
image: Messa in Latino
Trans: Tancred vekron99@hotmail.com

Katholisches...
AMGD
Posted by Tancred at 4:09 AM