Occultism Under a Catholic Name: Parodies of Native American Traditions Exploited by Radical Leftists to Destroy the Mass 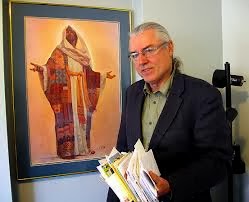 [Minneapolis]  Being a radical in touch with indigenous traditions is a kind of garden industry involving lots of consumer items, sage, special mystical rocks, weird confab liturgies, guest appearances at schools and other perks. Whether these practices are legitimately Indian, or have more pecuniary or nefarious purposes is at question. Supposedly, the personages involved in this type of activity is surrounded by a panoply of myths and various objects  imbued with alleged magical properties. They provide an aura of authenticity for entrepreneurs, various groups of victims, particularly native Americans, who often hide their demands for special treatment, entitlements and subsidy behind clouds of mysticism and guilt.   Such is the case with the community of Saint Kateri Tekakwitha where new age practices, political correctness, heresy, occultism and liturgical abuses are blended together under a mostly non-native leadership who also in some cases cynically conceal their agenda under a Catholic banner.

It's not necessary to resort to faux mysticism to be an authentic Native American. Saint Kateri Tekakwitha herself was baptized as Catherine Tekakwitha and became fittingly known as Lily of the Mohawks (1656 – April 17, 1680). She  is a Saint, who was a virgin penitent and layman. Born in Auriesville (now part of New York), she survived smallpox and was left with scars on her face and body when cured. As an orphan, she was one of the few successes of the Jesuit missionary effort to the Mohawks, but her conversion yielded a great bounty.  She was baptized lived in constant prayer and sacrifice till the end of her life at the Jesuit mission village of Kahnawake, south of Montreal in New France, now Canada.

Despite having such a noble namesake, the Catholic Community of St. Kateri Tekakwitha, which was founded by a heretical, but unhumbled, Father James Notebaart and is now headed by Father Michael Tegeder, (More environmentalist and civil rights activist than priest, if he could be called a priest.) features a number of departures from approved practice of the Church under the auspices of the General Instructions of the Rubrics to the Mass.

On April 7th 2012, Holy Saturday, Father Michael Tegeder presided over a Mass, if indeed it was a Mass, which contained and continues to contain many liturgical abuses, if not outright heresies along with various attempts at political correctness.  The Archdiocese has been informed:

I once made a donation of supplies to the St. Joseph orphanage. I think it was in the Dakotas. Anyway, they sent a thankyou note and it included a bunch of pagan Lakota crap. After I called and scolded them I forbade them to send any more of that evil nonsense to my Catholic home and I never donated again.

There is a litany of papal abuses with regard to inculturated praxis liturgically as various customary norms from various indigenous cultures have been embraced by post-conciliar popes, bishops and presbyters - I have a massive file of such abuses, including John Paul II's which under normal circumstances would exclude him even from veneration. Indeed, how the paradigm has shifted under the liberal modernist dictatorship. What price obedience?

what is it with these doctrinally suspect priests not wearing chasubles? Do they just want to show off their rainbow stoles or is it too hot for chasubles?

You may find these interesting.
"Native Indian parish and archdiocese clash", Dec. 14, 2012,
http://www.praytellblog.com/index.php/2010/12/14/native-indian-parish-and-archdiocese-clash/

Click on the underlined link in first sentence of the article of Dec. 13, 2010, "Today’s Mineapolis StarTribune reports on a clash between the Church of Gichitwaa Kateri and the chancery ...." It takes you to this interesting article with some useful factoids.
http://www.startribune.com/lifestyle/111828634.html
--"...the nearly 100 members of the tight-knit parish...."
--"...the arrival of a new pastor in June following the retirement of the Rev. James Notebaart, who served the community for close to 20 years....."
--"...Founded in 1975, Gichitwaa Kateri has added Indian elements to the Catholic ceremony for nearly two decades...."

I visited Church of Gichitwaa Kateri (3045 Park Ave S, Minneapolis, MN 55407) and I'll never forget all the paganism. I remember the sketch/artist's rendition (to the right of the Our Lady of Guadalupe banner as you look at the banner) of the "White Buffalo Calf woman". You can catch a glimpse of it in the eponymousflower.blog video of smudging.

Go to the link below and scroll about half-way down the webpage to see photo of Pope John Paul II being smudged, "...This is not just a neutral tradition based on atmosphere, or cultural music or art, but used to call out spirits...."
http://galatiansfour.blogspot.com/2012/02/roman-catholicisms-blending-with-native.html

http://www.archdiocesesantafe.org/Offices/NativeAmericanMin/Native%20American%20Catholics%20-%20brochure%20in%20word%20-2011.pdf
Title of article “Native American Catholics”. Website appears to be from the Archdiocese of Santa Fe, pagan feathers and Native American pagan dancers in front of the altar.

http://my52wow.com/2012/01/14/a-new-saint-and-a-native-american-catholic-mass/
A New Saint, and a Native American Catholic Mass
Posted by my52wow ⋅ January 14, 2012
“…surrounded the chapel; dream catchers with colored ribbons hanging from them hung on the walls between the windows (to my knowledge, “dream catchers” are pagan, American Indian frame-with-web-and-ornaments for the pagan belief of catching dreams & pagan worship)…The service opened with a mention of the Trinity. This was familiar. Then, a prayer. During the prayer, we moved together as a congregation – facing each direction. First north, then east, then south, then west. The prayer called on The Great Spirit to bless the service. At the end of the prayer, we touched the earth; it seemed that we were grounding the prayer in a realization of the place that we stood…We all shared in the incense that was burning, as one of the worship leaders waved the incense smoke towards us with a feather….”

Lots of luck with that. In most dioceses, Rome should shut down the diocese -- as if that could possibly happen these days.

It is a very difficult thing to think, but it is a conclusion that I see mirrored over and over again, since I have left Rome. The change in praxis prior to the Great Schism of 1054 with Rome and the 'Ecumene' of Europe, to the 'inclusion/inculturation' model that began in earnest with Francis of Assisi after 1100, is due almost solely to the legitimization of the filioque. Because it is a tenet of almost all minds today that 'equality is next to sanctity,' (but, as Chesterton said, Heresy isn't made normative, just because it's a popular fad) it is a great error to believe, preach, or practice the conversion of the non-Europid to Christianity, and Rome's lead in all of this over the last 1000 years, is the MARK of her apostasy. This is only confirmation of that factoid. The 'world' of the Great Commission that Christ gave, has to jibe with the 'I am come ONLY to the Lost sheep of the HOUSE (oikos- race, clan, racial family) if Israel. To the Apostles, the 'world' of their day, ended at the Ural Mountains, and the Pillars of Hercules (Gibraltar) -in short, Europe. As Belloc said, 'Europe is the Faith; teh Faith; Europe. The First non-European pope's actions clearly bespeak great heresy, and only serve as confirmation of that earlier delimiter, that Rome has denied, to her very peril. - Fr. John+

So what about Russian Orthodox evangelization in Alaska? There has also been missionary work by Eastern Orthodox in Africa. For goodness sakes, Jesus, the incarnate Logos, knew how big the world was when He commanded His disciples to "Go into the whole world and make disciples of every nation..." And when He said "When I am lifted up, I will draw all men to myself." Your racist nonsense has NOTHING to do with Eastern Orthodox faith. I come from a mixed Catholic and Orthodox family and I have never heard such heretical dribble from any Orthodox, clergy or lay. May God have mercy on your poor confused soul!

I've seen "Fr. John" on other websites. His so-called "Orthodoxy" is a weird mixture of Christian Identity cultism and Orthodoxy. He's from Minneapolis, Minnesota, he's an embittered Ex-Catholic supposedly turned Orthodox. I've always thought his Orthodoxy was bogus, your remark confirms my suspicions. BTW, he has a website called The White Christ. If you wish to investigate him, that's were to start. You might want to alert the orthodox community the Twin cities about him. Whether he's canonical or not, he may be harming the souls of some Orthodox folks and their children.