Feast of St. Peter Damian, Doctor of the Church 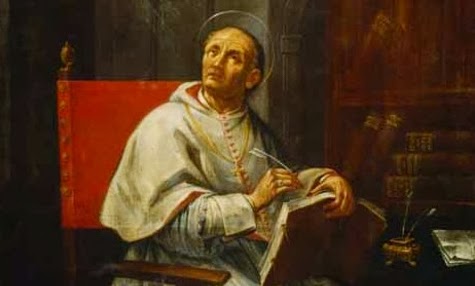 Edit: St. Peter Damian had his feast extended to the 23rd of February by Pius IX in 1923 at which time the Pope also pronounced the great reformer a Doctor of the Entire Church.  No doubt this Doctor could prescribe some medicine for the Church today.  Some may want to sweep the Saint under the rug or at least severely mute the author of Liber Gomorrhianus’ witness.  We found this appropriate citation:

“This vice strives to destroy the walls of one’s heavenly motherland and rebuild those of devastated Sodom. Indeed, it violates temperance, kills purity, stifles chastity and annihilates virginity ... with the sword of a most infamous union. It infects, stains and pollutes everything; it leaves nothing pure, there is nothing but filth ... This vice expels one from the choir of the ecclesiastical host and obliges one to join the energumens and those who work in league with the devil; it separates the soul from God and links it with the demons. This most pestiferous queen of the Sodomites [which is homosexuality] makes those who obey her tyrannical laws repugnant to men and hateful to God ... It humiliates at church, condemns at court, defiles in secret, dishonors in public, gnaws at the person’s conscience like a worm and burns his flesh like fire...      “The miserable flesh burns with the fire of lust, the cold intelligence trembles under the rancor of suspicion, and the unfortunate man’s heart is possessed by hellish chaos, and his pains of conscience are as great as the tortures in punishment he will suffer ... Indeed, this scourge destroys the foundations of faith, weakens the force of hope, dissipates the bonds of charity, annihilates justice, undermines fortitude, ... and dulls the edge of prudence.      “What else shall I say? It expels all the forces of virtue from the temple of the human heart and, pulling the door from its hinges, introduces into it all the barbarity of vice ... In effect, the one whom ... this atrocious beast [of homosexuality] has swallowed down its bloody throat is prevented, by the weight of his chains, from practicing all good works and is precipitated into the very abysses of its uttermost wickedness. Thus, as soon as someone has fallen into this chasm of extreme perdition, he is exiled from the heavenly motherland, separated from the Body of Christ, confounded by the authority of the whole Church, condemned by the judgment of all the Holy Fathers, despised by men on earth, and reproved by the society of heavenly citizens. He creates for himself an earth of iron and a sky of bronze ... He cannot be happy while he lives nor have hope when he dies, because in life he is obliged to suffer the ignominy of men’s derision and later, the torment of eternal condemnation” (Liber Gomorrhianus, in PL 145, col. 159-178).

He is certainly the saint to pray to for to rid the clergy of sodomites.

Check out Randy Engel's The Rite of Sodomy: Homosexuality and the Roman Catholic Church: Historical Perspectives From Antiquity to the Cambridge Spies (vol. 1, 487 pp.), ch. 2, part IV of the first volume (pp. 46 ff.) for an excellent overview of St. Damian, Liber Gomorrhianus, etc.