Cardinal Maradiaga: "One May Also Criticize This Pope, But With Love" 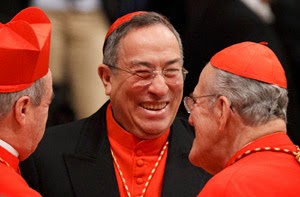 (Rome) since Monday morning the C8 Cardinal Council will be meeting for the third time. Cardinal Maradiaga, the coordinator of the Council has also said in advance that one may criticize "this Pope, but with love."
Pope Francis appointed  eight Cardinals in April 2013  to consult with them in regarding the reform of the Curia and the leadership of the Church. Their meeting  will last until Wednesday evening. On Thursday  a four-day meeting of the entire College of Cardinals begins. The first two days as a regular, then as an extraordinary consistory with the inclusion to the College of newly appointed cardinals by the Pope.
Ahead of the meeting  C8 Cardinal Maradiaga has confirmed what was already suspected: "We will listen to the commission for Vatican Bank IO and economic affairs" (see separate report Vatican intensive: C8 Council and Consistory for "Hot" Topic of the Family ).
Cardinal Oscar Rodriguez Maradiaga, Archbishop of Tegucigalpa in Honduras is the coordinator of the C8 Council.  According to the media, he has recently been referred to as "Vice-Pope" because he has been particularly self-assured as the coordinator since the election of Pope Francis and his appointment.
"The work of our Commission have begun in October. It is a serious job to be accomplished, which is why one must have patience. It is a work that will bring its fruits, but a hasty society must have patience. The things of the Lord will take time," said the cardinal  in an interview for Tgcom24 . "Even the Pope has said that we should live according to the words of the New Testament. Therefore, we have to work with discretion. This means that it is necessary to listen, to pray, to converse and then decide. We are in this process," said Maradiaga.
The Honduran cardinal was asked whether one should criticize "this pope"  because of  some issue. "I remember a lot of Pope Paul VI. He took the view that one can criticize the Church, but like a child criticizes his mother. In the same way, I thnk you can criticize this pope, but with love," said Cardinal Maradiaga.
Text: Giuseppe Nardi
image: AsiaNews
Trans: Tancred vekron99@hotmail.com

Edit: We couldn't find this article translated at Asianews.it yet, so here it is, but with a note.  Not to be contentious, but we noticed that Paul VI may not have minded criticism of the Church so much, however intemperate and unrealistic it was, but he hated being criticized, even gently:

Then the Holy Father said to me, further:

I had the strong impression that it all came back rather to his person, that he was personally hurt:

"You condemn me, so what ought I to do? Must I hand in my resignation and let you take my place?"

"Holy Father, let me continue. You have the solution of the problem in your hands. You need say only one word to the bishops: receive fraternally, with understanding and charity all those groups of traditionalists, all those who wish to keep the prayer of former days, the sacraments as before, the catechism as before. Receive them, give them places of worship, settle with them so that they can pray and remain in relation with you, in intimate relation with their bishops. You need say only one word to the bishops and everything will return to order and at that moment we shall have no more problems. Things will return to order. As for the seminary, I myself shall have no difficulty in going to the bishops and asking them to implant my priests in their dioceses: things will be done normally. I myself am very willing to renew relations with a commission you could name from the Congregation of Religious to come to the seminary. But clearly we shall keep and wish to continue the practice of Tradition. We should be allowed to maintain that practice. But I want to return to normal and official relations with the Holy See and with the Congregations. Beyond that I want nothing.”

Link to Katholisches....
AMGD
Posted by Tancred at 7:27 PM

The attitude from the papacy these days towards tradition and traditional Roman Catholics is a long way from the charity that abounded in the pre-conciliar church. For a pope who thinks himself humble he ought to take a long hard look at many of his Traditionalist predecessors - there are over 250 of them. How can anyone so highly placed be so historically and liturgically challenged?

Mariadiaga walks around and talks a lot as if he thinks he has a good shot at being elected Pope in the next conclave in a couple of years.
HAHAHAHAHAHAHAHAHA!!

I'm counting down to the retirement of all cardinals... oh wait, that has already happened: someone forgot to tell the Catholic church.