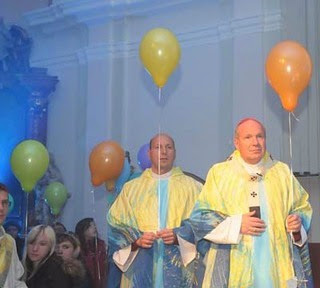 Edit: Cardinal Christoph von Schönborn reforming the Church, one balloon at a time.

Vatican City (kath.net / KAP) The Vatican has begun a three-day meeting of the Cardinal Council for the reform of the Curia on Monday. The eight cardinals of the so-called C8 Council, among them the Archbishop of Munich Reinhard Marx [And +++Sean], are consulting together with Pope Francis about a realignment of ecclesiastical government headquarters. The focus this time are the twelve Pontifical Councils.


As the meeting  of the College of Cardinals closes its general meeting on Thursday, Pope Francis' most important advisors will address the course of the reform efforts. In the plenary session, attended by Cardinal Christoph Schonborn , the Pope wants to present his previous initiatives and reform ideas.

On Saturday Francis will confer office   19 church leaders  from his first consistory to the College of Cardinals, including 16 bishops under 80 years, who may therefore be able to also participate in a papal election. Among the electorate is the prefect of the CDF, Gerhard Ludwig Müller.

The effect of the future appointments mean that the  Church Senate is to become "less European" and it is geared more to Latin America.   Nearly one-third (6 of 19) of the New comes from the Americas south of the Rio Grande.

In the two previous conferences the C8  focused on the work of the Synod of Bishops and the nine congregations. The C8 Council had already been used by Pope Francis a month after his election, to advise him on Church authorities and to make recommendations for a reform of the Curia to him.

Bring on the overt schism!

Schism is as schism does...

Hey! I have a great idea! Cardinal Maradiaga can lead the way by rejecting eurocentric clerical dress. After all, the garb Cardinals wear is faulty for at least two reasons - the garb is eurocentric and it accentuates outdated hierarchical and authoritarian norms. After all, I'm sure the good Cardinal would agree that in view of VII adjusting the relative positions of priests and laity, he really isn't that much more important than your average pew sitter. In any case, perhaps Cardinal Maradiaga will looks to his ancestors - the indigenous peoples of Honduras - for design inspirations for his new cardinal get-up. I think the church is ready for a be-feathered Cardinal!

In the meantime, according to the Vatican's own surveys, the decline of the church is accelerating towards a total collapse. the solution can hardly be an increase of the very same medicine which is already killing off The Faith.
Curia reform is impossible when virtually all we have are rotten bishops who have almost lost their sensus catholicus. Until they swallow the bitter pill that the Councils of the 1960s need to be abolished and we need to restore The Roman Catholic Faith, then there is no hope in this pointless process.

They wanted the mass loss of Faith; that's why they continue to ensure people are not taught the Faith and do not have access to traditional liturgy, liturgy of the hours, benediction, moral education, etc.

I read that Pope Francis had his Argentine passport renewed just in case he needs some place to hide after the synod.

Are those yellow & blue chasubles ? They look very strange. Nice enough, but strange - not very liturgical. As for the balloons - weird.

The goal of the conference in Vicenza was to show Mass robes and stoles, "which are innovatively completed in the spirit of the Liturgical Constitution of the Second Vatican Council".

The supposed jury panel have selected "simple robes" -- a chasuble and four stoles.

"The Papal chasuble, which Benedict XVI wore at his visit to Vienna, is much too elaborate and will not be displayed."

One of the exponents was a "violet, living tree chasuble", which Cardinal Schönborn brought as part of the second Diocesan collection.

The pieces can be borrowed from the lending services for Viennese Parishes.