500,000 Protest the Gender Ideology of Hollande's Socialist Government in Paris 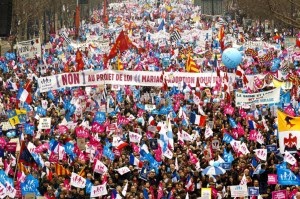 (Paris) Last Sunday, hundreds of thousands of people demonstrated in Europe against family hostility, "gay marriage" and the business of surrogacy. The French civil rights movement Manif pour tous had called for rallies. In Paris alone more than half a million citizens took to the streets to protest against the new social order of the left-wing government of Hollande with its  aberrosexual  and gender ideology.
Many journalists and media who have committed to the mainstream left, get worked in a furious rage in the face of such unexpected resistance to "progress" and "modernity". This includes Stefano Montefiori, the correspondent of the Corriere della Sera. In Manif pour tous rallies whole families go on the road, Father, mother and children. Ordinary families without affected implementation and redefinition of nature through the ideological lens. But for journalist Montefiori, he creates from the peaceful rally participants, children included,  a dark heap of "integralist Catholics", and a gang of homophobic Nazis who demonstrate "against the system, the Modern and the Jews." In such a hodgepodge of arbitrary ingredients, you can easily imagine how Montefiore, must have foamed at the mouth,  observing the mass inflow to the rallies.

Half a million ordinary citizens demonstrated  in Paris against the policies of President Hollande, to allow Lesbians (solo or in  double packs) access to artificial insemination in order to gain and thus the thus bring children into the world, robbing them from the outset of a father. They protested against the approval of surrogacy and thus the uterus business.  Feminists always demand in the context of abortion: "Get out of my uterus". The unborn child is for them is nothing. But in the context of surrogacy, where the uterus is exploited as a business transaction, the feminists are silent. Manif pour tous therefore considers them "hypocritical" from the start. And finally, the citizens of Paris demonstrated, but also in Lyon, against the new " ABCs of Equality"  of laïcité, with which the Hollande government wants to introduce a new state ideology in schools.
The Pink Lenses  of Hollandists in the Media
For Montefiori, the protest of Manif pour tous is an expression of the "old France", which will be overcome by the new progressive ideology of Jacobinism. The Corriere della Sera made ​​itself the mouthpiece of the French government to promote abortion and homosexualization and to disseminate the gender ideology, but at the same time is never tired of denying all this. They adopt a law that every unborn child can be killed at will of the mother, but but it denies that they promote abortion. They adopt the law that legalizes "gay marriage" and enables aberrosexuals the adoption of children, but it denies that it promotes aberrosexuality. It already prescribes in kindergarten such books as " Father Wearing a Skirt" or "Bill's New Skirt " but it denies promoting gender ideology.

Minister of Education Vincent Peillon sent a circular letter on 4 Januar to all school principals, to support the project  " Ligne Azure" in the classroom. It says: "Heterosexuality is not the only way" with the "invitation" to all the children, to perform a test to "choose"  their own sex. But no, that is, says the socialist government in France and so says the Corriere correspondent Stefano Montefiori, not a  "gender ideology" at all.
And of course, said Laura Slimani, the new chairman of the youth organization of the Socialist Party (PS) Young Socialists never even said last Saturday: "Yes, the differences between men and women are constructed, but gender exists and yes, we will learn it in the schools " (see video below). [Will look for English]

Protest Against Forced Sexualization and Ideology Through the School

But you won't   read from Montefiori,  why thousands of French parents  did not send their children to school to keep up with the scheduled monthly  Journée de l'Ecole de Retrait  to protest against the homosexualization and genderisation of their children through state coercion last January 27th.
Montefiori was silent about the clear line of Frigid Barjot, the initiator of Manif pour tous and Ludovine de La Rochere, the current chairman of the civil rights movement. Both emphasize appreciation of homosexuals as human beings and respect. Their struggle is but directed against a political agenda against the family and thus aimed to destroy the basis of the community. One of the speakers of Manif pour tous is incidentally the aberrosexual Jean-Pierre Delaume-Myard who makes no ideology of his personal sexual orientation and therefore is against the legalization of "gay marriage". In the ideologically confused head of  the Hollandist Montefiori, it is likely he is in reality a closeted homophobe.
Text: Giuseppe Nardi
Image: Manif pour tous
Posted by Tancred at 7:41 AM

Corriere della Sera is a leftist, massonic, anticlerical newspaper in italy, just slightlly less leftist than Repubblica. And Montefiori with that surname...well you probably understand what i mean.
rosa

These anti-genderists are so blind they cannot stand the reality of men and women being biologically different or their brains being different either because their weak and senseless hypothesis crumbles immediately. Professor Simon Baron-Cohen has done a lot of useful & significant work here. Of course, he is not the only one. The brains of male & female are very definitely distinguishable - so, too, are their bodies but the politically correct minority cannot see this. When they keep denying these two realities you realise we live in absurd times when good is evil and evil is good, just as the evangelists warned. Now go public with this news and the so-called "liberals" accuse you of "homophobia"; hating women and being a male-chauvinist patriarchal fascist. Until we resume control of language once more we will never overcome such monstrous ignorance and decepetoin.