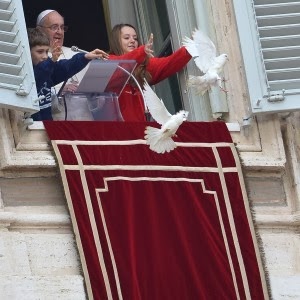 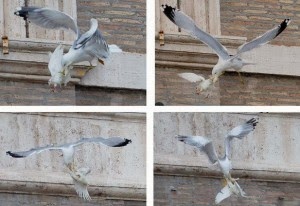 
With the Pope, as always, there were two children of   Catholic Action of Rome at the window. Traditionally  a boy or a girl can free the pigeon,  otherwise - since Paul VI. who introduced this initiative  - by the Pope himself, the two ascending white doves were a joy for everyone present at St. Peter's Square. Their flight has been consciously or unconsciously seen as a good omen. The pigeons flew often beautiful and acrobatic tracks, accompanied by the people with wonder and applause. Often they returned and sat on the window sill in front of the Pope, which caused the Popes to make sympathetic and humorous observations. John Paul II once said: "The Holy Spirit like a dove, returns to check whether the Pope does everything well."  Benedict XVI. once said: "It is evident that the Holy Spirit wants to stay with the Pope."

A year ago, just two weeks before Pope Benedict announced his  resignation, a terrifying spectacle took place. For the first time the audience had to watch as one of the white pigeons was attacked by a seagull. The dove fled back into the saving protection of the papal apartment. Vatican spokesman Father Federico Lombardi  announced after this scene at the first encounter with the press that the dove flew for safety to  the papal apartment and was unharmed. The seagull did not dare to follow her there. The hunting scene brought an oppressive situation  to expression at the time of the hostility and harassment, which was staged against the Pope.
In 2014 everything was different. The Pope did not release the white dove this time. Both pigeons were released  by children. None returned to the papal apartment. So, it was as though they wanted to underline the fact that they had  left the Pope's residence,  yes, the "Holy chambers"  are empty. A seagull but lurked again and this time with success. The Dove of Peace was no longer protected, the windows to the papal apartment were closed. There, no one lives. No mercy, no protection. The Seagull killed the dove and dragged her away in its beak. 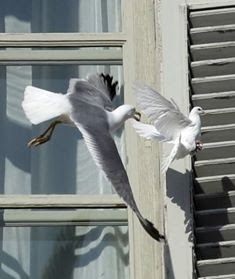 Gulls and Ravens against Pigeons

A pigeon was killed by a seagull and the other dove was chased by a black raven. Hunting scenes on St. Peter's Square. If you want to look at it symbolically, then it is a clear sign of how the enemies of peace and truth increase. A year ago was the attack of a seagull which failed. This year the attack was successful. And the attacking gull was joined by a black raven, to be exact, a carrion crow, a second enemy added, engaging in the hunt for the white doves and it even tried to grab the surviving dove.
If you want to speak in images and metaphors, then there was - to be exact - a  "Raven" involved year ago.  A black Raven in human form which mangled Pope Benedict XVI. The "Raven" was the unfaithful servant, who abused the trust of the Pope and of his desk, from which he stole documents from the papal apartments. The valet was called "Raven", but the actual ravens are still unrecognized, namely the manager or principal for this theft. 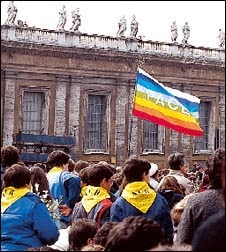 On Sunday the so-called "peace flag" was to be seen, which is used by the peace movement, at St. Peter's Square, again. The inventor of the symbol is Aldo Capitini who resigned in 1959  from the Church and his books in which he denied the divinity of Jesus Christ, were placed on the Index of Forbidden Books of the Church because of their heresies. He flew the "flag" in 1961 for the first time at the "Peace March". The political left quickly took hold of the "peace movement" and their symbols, which found a "home" in the Church after the Second Vatican Council  in a left-Catholic milieu in which it is believed that the word "peace" alone is enough  and one did not have to think further in a naive carelessness about the origin of ideological influences.  This attitude is also demonstrated with this multi-colored flag at St. Peter's Square, which is anti-Catholic, from its very creation and intention.
A flag, whose distinction from the nearly identical rainbow flag of the "gay movement" can only be appreciated connoisseurs the nearly the same rainbow flag of the gay movement, which came into existence  at about the same time. If you look closely, the color ranking is reversed, the "peace flag" has seven colors, the "gay flag" only six. The "peace flag" has the white inscription "Pax" or peace. Nevertheless, they are confusingly similar and it is difficult to see this as a symbol of Christ. The gay movement is in its aim, for an open revolt against the divine order and  life. But if one is  to talk of symbols, then this symbol is also to be mentioned, which was shown on Sunday in St. Peter's Square.
Gulls and ravens fell upon the pigeons of the Pope. Whoever wants to read "signs" will only be able to see an ominous premonition. Nevertheless, if one pigeon was killed,  the other which was attacked by the raven, escaped. Non praevalebunt!
Gulls are described in the Old Testament as unclean animals, who attempted to feed on the sacrifice of Abraham, which was interpreted as a premonition that the descendants of Abraham would be persecuted. Persecution that Christ foretold for those who will follow Him.
Introduction / Translation: Giuseppe Nardi
image: Messa in Latino
Trans: Tancred vekron99@hotmail.com
Link to Katholisches...
AMGD
Posted by Tancred at 5:54 AM

Thank you, Tancred, for this extremely interesting article.

Abundant signs & symbols since 1969 - blasphemous and sacrilegious NO services by the tens of thousands; exponential loss of religious and priestly vocations; disastrous numbers of church and seminary closures; massive drop in Sunday attendances throughout what was once Catholic Christendom; systemic ecclesiastical abuses financially & sexually with institutionalised attempts to cover it all up; enormous loss of funds in litigious processes to cover up immoral clerical and episcopal behaviour; abuse of canonisation and beatification for post-conciliar political ends; contradiction of church teaching on salvation by JP II among others..........................and so it continues under the "new" management. Characteristically, stolen relics of JP II and the floods at Lourdes preventing them from being exposed there last year plus other manifestations would never be enough to turn this out-of-control downhill plunge towards the ultimate catastrophe. The blind lead the blind into the pit; the tree bears rotten fruit; they scatter the sheep from the penfold; the hierarchy have abdicated their responsibilities by the liberal modernist process of collegial neutrality and they have sold our birthright for a disgusting mess of pottage.

The modern church becomes increasingly imbued with the signs and symbols of neopaganism and pantheism.

But it's still creepy.

Everyone remember the famous picture of the lightning bolt striking the cross on the dome of St. Peter's the day Benedict XVI resigned? Not once did it strike (which would have been just a coincidence), but 2x. A meteorologist I know said to strike in the same place 2x is almost impossible. Therefore, take it as a sign of God's displeasure with Benedict XVI's decision.......or, take it as a sign of Satan moving into the Vatican and the Catholic Church.hence we have Pope Francis, and his like minded underlings bent on destroying the Catholic Faith and tradition....Cardinals Maridiaga, Dolan, Wuerl, Bras de Aviz, and others...as well as Fr. Volpi and his persecution of the Franciscans of the Immaculate.
Pope Francis' doves attacked and killed by crows and a herring gull(sea gull), wasn't just a coincidence. It was a sign that evil lives and reigns in the Vatican. And has been growing from 1963 up until now. It is almost complete. And we should be very concerned about this Pope Francis and the direction he seems to be taking the Church...and his advisors.
Good Popes, good pastors, good Cardinals, good bishops, good religious Orders produce abundant Graces and good fruit. As had been the case in the Church in the 200 years before Vatican II.
The opposite is true since 1965. It doesn't take a genius to recognize we're on the wrong path, headed towards self-destruction. Especially since March 13, 2013.

I completely agree with you, Anonymous 5:16.

there are no coincidences….

Contrast this incident with the ravens that came and protected the dead body of St. Vincent after his martyrdom.

I agree. The Secular and Media adores Francis. This is what Jesus said "If you were of the world, the world would love is own" John 15:19

The holy dove is under constant persecution by evil people. There's no easy way to stop it, and this attack is a sign that evil has reached the very Vatican. In case you're wondering what or who the holy dove is, know this, it's Puerto Rico's motto, "his name is John". If you even suspect someone could be him, suspect more based on how thoroughly he is degraded, maligned, and persecuted. Any other expectations of his life quality are a wishful myth. Being kind to everyone does not mean deflecting anger at particularly persecuted people as special. Persecution is anything but that.