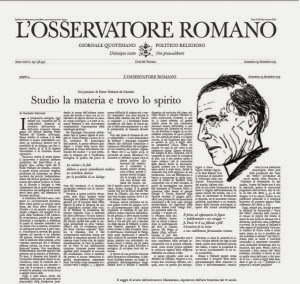 (Rome) A few days ago an article appeared in which the attempt was made ​​to rehabilitate the French Jesuit Teilhard de Chardin. The damning verdict of the CDF against the theologian is being played down there and dismissed as "controversial". The article did not appear in  just any old daily newspaper, but in the Osservatore Romano.  What does this have to do with  the question of obedience? Does it follow from this article and its theories  are to be even  represented in the daily paper of the Vatican?
St. Thomas Aquinas drew a clear line between obedience and disobedience. Rightful obedience as a virtue he defined in the Summa Theologiae (II-II, q. 104-195), but he gives two reasons why one who is obligated to obey his superior might  owe him no obedience.
The first reason is a statement by an even higher authority.  In  respect to this, the saint refers to Peter Lombard: When the Emperor commands something, but God the contrary, one must obey God, without regard to the Emperor.

The second reason is, if the supervisor commands something of his subordinate  in areas where he may hold him subject. Thomas Aquinas concludes that the people in the inner motives of the will owe obedience to God alone.

The forces that Rouse the New Pontificate

Osservatore Romano published a long essay in its issue of 29 December 2013.  "I study the matter and find the spirit" of Maurizio Gronchi, who attempts the rehabilitation  of the thinking of Pierre Teilhard de Chardin, and thus seeks to annul the monitem by the CDF against the French Jesuits of 30 June 1962. Basically, there is no obligationof a daily newspaper to "obey" in its position, not even a Catholic newspaper. But with Osservatore Romano , things are a bit different because it is not just any daily newspaper. Based on the instructions of Blessed Pius IX., this is the only daily newspaper that is printed in the Vatican City State.
The chief editor is appointed directly by the Pope. Although the newspaper is not an official organ of the Holy See, but at least semi-official. It comes logically that the opinion expressed is that of the Holy See. Of course, the editors have more room for maneuver in the fields of culture, politics and economy. However, this freedom would be a seduction into error if on the pages of L'Osservatore Romano article were published  things that contradict the faith of the Church, the Magisterium of the Church and tradition.

Rehabilitation Attempt of Teilhard de Chardin Against  the Official Condemnation

In this specific case, it is not just about a purely hypothetical consideration. The article with the rehabilitation of Teilhard de Chardin also has its positive side: it provides the occasion to highlight the limits of obedience. Should anyone think that maybe in the desire for faithful obedience of Pope Francis and the Osservatore Romano, there is need to follow the thesis of the author, then he should also know that he is in this against the 1962 monitum pronounced by Blessed John XXIII. An official admonition that continues to have full force and effect.
The thing is so obvious that the journalist admits it openly and reproduces the admonition of the CDF, but referred to it as "controversial and painful."  But anyone who follows such a judgment, speaks of not just any opinion but opposes in reality the papal Magisterium. The Monitus reads: "Certain works of Father Pierre Teilhard de Chardin, including some posthumous, are published and can not find the least benevolence. [...] In the philosophical and theological point of view it clearly recognizes that the said works contain dangerous ambiguities and serious errors which offend Catholic doctrine."
The exhortation of the Holy Office dated 30 June 1962 was officially published in the official gazette of the Holy See (Acta Apostolicae Sedis 54, born 1962, pp. 526) published. On 1 July of the same year, and also followed by an annotated publication in L'Osservatore Romano .

"Author on the Road to Apostasy"

Maurizio Gronchi doesn't even like the Magisterium of the Church, who praises  Teilhard de Chardin to the skies, while "even leading the reader to error" ( Corrispondenza Romana ) by citing incomplete judgments against  Jesuit  or torn out of context . According to the author's thought, the Frenchman was not heretical, but had, at best, "some weaknesses and difficulties."  The "dangerous ambiguities and serious errors" is an issue for Gronchi. In an article in the Osservatore Romano,  a document of the Magisterium of the Church, adopted by the Congregation of the Faith, with the approval of the Pope, is referred to as "controversial and painful." "This means that the author is treading the path of apostasy already," says Corrispondenza Romana . In addition to that there is   still the effusive praise for what has been explicitly condemned by the Magisterium.
The author thus lays claim to a wish to correct the Magisterium of the Church, and does so from the sides of the semi-official newspaper of the Vatican. Teihard de Chardin, who denies original sin and the distinction between matter and spirit represents, so says Gronchi, no "serious errors", but only tolerable "weaknesses and difficulties."

How Did the Article Appear in the Osservatore Romano ?

The backgrounds are unclear how it was possible that Gronchi could place his article in L'Osservatore Romano. The fact is that he is an example of where obedience is obligated to "disobedience": Whoever wants to be faithful to the Magisterium of the Church, must reject  the  published thesis of 29 December by Gronchi in the Osservatore Romano.
Maurizio Gronchi is a priest of the diocese of Pisa, Professor of Christology at the Theological Faculty of the Pontifical Urban University in Rome and Consultor the CDF .
Text: CR / Giuseppe Nardi
image: L'Osservatore Romano (Screenshot mounting)
Trans: Tancred vekron99@hotmail.com
Link to Katholisches...

I firmly believe that the election of this Pope will bring to a head sooner than later a division in the Church where modernism will be confronted by those who adhere to Catholic tradition.Isnt it strange to know that pre Vatican 11 we were all just known as Catholics.

Teilhard's notion that the world is on a constant course of self-improvement toward the "Omega point," when the world's transformation will "reach its fullness," and Christ will then suddenly appear, has absolutely no biblical or theological foundation. Unless someone is going to claim that Chardin was receiving private revelations - - which I've never heard, his prediction about the end of the world is interesting, but at odds with Christ's own words, e.g., "when the Son of Man returns, will he find even ten men of faith?" He did not say that He would be coming back when the world was finally perfected. The notion that fallen mankind can ever be perfected this side of the grave is of course naive nonsense.

"You can't get any benefit or enlightenment from thinking about Teilhard. The ravages that he has wrought that I have witnessed are horrifying. I do everything I can to avoid having to talk about him. People are not content with just teaching him, they preach him. They use him like a siege engine to undermine the Church from within (I am not kidding) and I, for one, want no part of this destructive scheme." -- Etienne Gilson

Teilhard's books should have been gathered and burned, and he should have been isolated in either a monastery or on an island for the remainder of his life. This is just one example of where the pre-Vatican II Church went awry - their treatment of heretics. Heresy and the proponents of heresy are poison and poisonous. They cannot just get a slap on the wrist and a wag of the finger and then left to continue spreading their error.

I often get the impression from what I have read the past fifty or so years that the Church before Vatican II did little, if anything, right. If so, it gives me no confidence that they are right now if, after hundreds of centuries, they failed to get it together.

The corrupt Catholic Church is getting what most of its members and its hierarchy want. Their lust is being fed, as God's hand is allowing them their hedonistic desires of false utopian pursuits.

Francis is a typical aging hippie type fool. His election to the papacy confirms that God wants the lunatics to administer the asylum. God always works things toward good. The evil is so entrenched and integral to Catholic Church governance and pastoral practices that an overwhelming malignancy is the best cure.

"The second reason is, if the supervisor commands something of his subordinate in areas where he may hold him subject. Thomas Aquinas concludes that the people in the inner motives of the will owe obedience to God alone."

Excuse me, you mean:

"The second reason is, if the supervisor commands something of his subordinate in areas where he may NOT hold him subject. Thomas Aquinas concludes that the people in the inner motives of the will owe obedience to God alone."

And "inner motives of will" are an example, I think of where one may not hold a subordinate subject, not a comprehensive list!

"Secondly, a subject is not bound to obey his superior if the latter command him to do something wherein he is not subject to him. For Seneca says (De Beneficiis iii): "It is wrong to suppose that slavery falls upon the whole man: for the better part of him is excepted." His body is subjected and assigned to his master but his soul is his own. Consequently in matters touching the internal movement of the will man is not bound to obey his fellow-man, but God alone.

"Nevertheless man is bound to obey his fellow-man in things that have to be done externally by means of the body: and yet, since by nature all men are equal, he is not bound to obey another man in matters touching the nature of the body, for instance in those relating to the support of his body or the begetting of his children. Wherefore servants are not bound to obey their masters, nor children their parents, in the question of contracting marriage or of remaining in the state of virginity or the like. But in matters concerning the disposal of actions and human affairs, a subject is bound to obey his superior within the sphere of his authority; for instance a soldier must obey his general in matters relating to war, a servant his master in matters touching the execution of the duties of his service, a son his father in matters relating to the conduct of his life and the care of the household; and so forth."