Gänswein: "Many" Pope Enthusiasts "Will Have Their Joy Stuck in Their Throats" -- Who Interprets Francis Correctly? 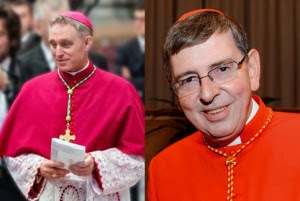 (Cologne / Rome) The interview of Archbishop Curia Georg Gänswein only appears in the January edition of "Cicero". It has already   reported several previously  known statements. Also, the Vatican expert Matteo Matzuzzi of "Il Foglio"  has commented about the Gänswein response. With the Pope Francis enthusiasts, for whom "the jubilation has been stuck in their throat", says the German Curial Archbishop and personal secretary of Benedict XVI since 2005.,   the virulence of nascent Church rebels in German speaking countries is increasing. They will remain disappointed, said Gänswein, because these are false hopes. Neither Archbishop Gänswein nor the article, however, go into the question to what extent Pope Francis might have abetted the nature of the rebellion with his unorthodox "pastoral" nature. Finally, the Pope has summoned none other than  the  chairman of the German Bishops' Conference, Archbishop Robert Zollitsch. Who interprets Pope Francis correctly? Why is it at all possible that conflicting positions can rely on him? In a Tornielli interview, referring to Matzuzzi, Pope Francis actually slows the flood of interpretations on the German rebel front. However, it is only a half-hearted correction because the Pope made no definitive position on the question of divorced and remarried. So the question remains open and continues to leave room for interpretation by both sides. The attitude of the Pope remains, through ambiguous, theologically poor precision, an ambivalent and  contradictory  opposition between teaching and pastoral care,  and thus causes a wellspring of new outbreaks of rebelliousness, that under Benedict XVI were almost suffocated.
Gänswein's opinion, together with statements by Cardinal Kurt Koch, at any rate,  is a signal that a resistance is being organized in the German speaking countries against the rebel faction.

by Matteo Matzuzzi
"Many of those who were enthusiastic about  Francis,  will have their jubilation stuck in their throats". These are the harsh words which  Monsignor Georg Gänswein, the Prefect of the Papal Household and Secretary of Emeritus  Pope Benedict XVI. expressed  in the January issue of the renowned German cultural magazine Cicero. He can look at the situation of the Church in Germany, where a significant part imposes demands against Rome  for rapid reform and an increase in the speed thereof. A turning point in the pastoral care of families as regards the sacraments is a starting point. It doesn't have to do with female Cardinals: whoever  thinks so, "is suffering under a bit of clericalism", as Francis had said in published interview for the  Third Sunday of Advent in a Tornielli interview. The discussion, however, could start at the Deaconess.

Gänswein brakes, however: "I hardly think the Pope the Pope will be compelled in his pontificate by certain German initiatives", thus referring   to the possibility of allowing women to the diaconate, an idea that was also  recently made by high-ranking wearers of the purple like Cardinal Walter Kasper . "Case closed", is the personal secretary of the Pope Emeritus' response to them.
During the recent Spring Plenary Meeting of the German Bishops' Conference in Trier,  the former president of the Pontifical Council for Promoting Christian Unity, said that it was his opinion, possibly to introduce the figure of the female deacon, who is capable of pastoral functions and fulfilling special liturgical services. There would be no dogmatic problems, as Cardinal Kasper adds: no consecration, it would suffice as a simple blessing.

Gänswein is very surprised and sees no changes on the horizon on this front, not even now that the Jesuit Pope, who has raised such high expectations in much of the world's episcopate, with whom he says he will  cooperate "in trust and harmony." The Prefect of the Papal Household is sharply critical of "some forces that want to monopolize the new Pope for their own interests."  Forces, which will remain disappointed, says Gänswein. It is sufficient to look at the handout of the Office of Family Pastoral Care of the Archdiocese of Freiburg, where the approval of remarried divorcees to the Sacraments is  being  suggested,  especially as regards  the re-admission to communion, in the name of Francis' so often mentioned mercy.

But it is the same pope who clarified in the Tornielli interview: "I spoke of baptism and the community, as spiritual food to go forward, as an aid and not as a bonus. Some have immediately thought of the sacraments for remarried divorcees, but I have not referred to specific cases., I only wanted to demonstrate a principle. "
An indirect response for those too, who  with Cardinal Reinhard Marx, Archbishop of Munich-Freising, who accused the Prefect of the Congregation of the Faith, Archbishop Gerhard Ludwig Müller accused of putting the discussion on the pastoral care of marriage with a view to the next Synod of Bishops in October 2014 in   chains and wanting to strangle it.

Cardinal Koch: "the Will of Jesus Christ" is Critical

These were  described as absurd polemics  a few days ago by the Swiss Cardinal Kurt Koch in a long interview. "For Archbishop Müller has done nothing other than the teaching of the Church to remember, and he has reiterated on what Cardinal Ratzinger has said himself as Prefect of the CDF to this problem area. Any serious examination of this problem comes to these teachings, which corresponds to the clear will of Jesus Christ, not over. "In what has  now become a customary opposition between teaching and pastoral today" can not be the way of the Church, as such a contrast contradicts the very essence of being Church. New Pastoral was are only to be found in the light of the truth of the doctrine," Cardinal Koch  is among other things the successor of Cardinal Kasper as President of the Pontifical Council Unity. A few days ago he met together with Patriarch of Moscow Kirill, during a visit to Russia.
Introduction / Translation: Giuseppe Nardi
image: Wikicommons
Trans: Tancred: vekron99@hotmail.com
Link to katholisches...

Edit: Just a note about what the Archbishop said, it's an expression I had some trouble with, "wird Jubel im Hals steckenbleiben."  It literally means to jam or have something jammed down, or die in your throat.  It has a certain harshness to it, as pointed out by Mr. Nardi.  I guess a way to describe it is to be the person jumping up, thinking he has won an academy award, only to find out that his exuberance was not only premature, but completely wrong.
AMGD
Posted by Tancred at 12:07 PM

Isn't the great problem with Pope Francis not that he will personally say 'yes' to divorced and remarried, but that he plans to devolve 'doctrinal authority' away from the centre, to local Bishops conferences? Once that happens, all hell will break loose, but presumably Pope Francis when challenged about the break up of the Catholic Church will be able to say, 'Nothing to do with me, I don't agree with it but...'

The very intent of putting these matters up for discussion at the forthcoming Synod [how very Anglican] opens the door to wholesale dissent. The less than equivocal statements of Franciscus merely fanning the flames. Both reflective of modern day Jesuits and the Vatican II tactic.

A blessed Christmas to you Mr. Tancred!

And a Holy Feast to you!

Happy Christmas to you all at TEF blog. Thanks for your service to the Church - and to the truth.

Sixupman: "The up coming synod of Bishops...." How very Anglican.. You are so right