Gänswein About Benedict XVI: Resignation Was "Amputation" -- About Francis: "I wait every day anew, what will be different today" 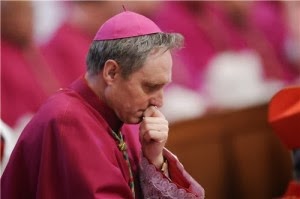 Update 18:41 GMT, Monday, Dec 9:  Msgr. Gänswein has denied that he made these statements as was reported in La Stampa and Radio Vaticana.  See recent report from Kath.net.

(Vatican / Cologne) Curial Archbishop Georg Gänswein, the personal secretary of Pope Benedict XVI. refers to the surrender of the German Pope as "pain". This he said in an interview published on last Thursday with the Hamburg weekly Die Zeit. The resignation of Benedict XVI. , he had experienced as "amputation". The years as personal secretary to the reigning Pope had been very intense: "I left eight years of blood and also tasted blood, sometimes."
Archbishop Gänswein continues to speak of Benedict XVI. as "Holy Father". This does not alter the basic fact: "There is only one Pope."
He feels today in his two roles as though he is torn  between two worlds.  For a year Archbishop Gänswein has been Prefect of the Papal Household, as he serves the new pope. At the same time he is also secretary of Benedict XVI., who lives retired at the monastery Mater Ecclesiae. "I have the impression of living in two worlds," he is quoted by Die Zeit. And with a view to the reforming activities of Pope Francis: "I wait every day anew, what will be different now."
The decision of Pope Francis, not to live in the papal apartments in the Apostolic Palace, but the guest house Santa Marta of the Vatican,  Gänswein considers as an "affront" against Benedict XVI. Especially because the Pope from Argentina said that the apartment in which the popes lived before him makes him "gloomy", and anyway, he wanted to live "among people". In the meantime, the new pope and his Prefect of the Papal Household could even share a joke with each other, as Gänswein confided to the weekly paper.
Text: Giuseppe Nardi
image: Papa Ratzinger
Trans: Tancred vekron99@hotmail.com
Link to Katholishes....
AMGD

Please don't mistake me for Bill Clinton but I feel the pain and...why dost thou hesitate... love.

In other words: Bp. Gänswein is a sedebenediciplenist?

Benedict XVI is still the only true VICAR of Christ Jesus .Francis is the Anti-Pope