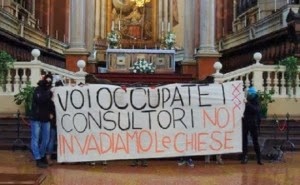 (Bologna) A group of militant feminists profaned the Cathedral of San Petronio in Bologna this past Monday. Masked with hoods that recall  the extreme left-wing Russian Anarchists ( see separate report ),  abortion and aberrosexual activists protested against the rejection of the Estrela Report by the European Parliament. Before the altar, the Church opponents unfurled a banner reading: "You Occupy the Counseling Centers - We Fill the Churches" and shouted in chorus: "Get the Church Out of Our Ovaries."
The Estrela report, which  the abortion and aberrosexual ideologues wanted to anchor as an official EU Directive, was rejected on the 10th December by the plenary of the European Parliament by a narrow margin. With the Estrela Report, named after the Portuguese Socialist Edite Estrela, the killing of unborn children in the EU would have been signed as a "women's right". The report also wanted to force all the EU Member States to legalize the artificial insemination of lesbians. The Austrian Green MEP and avowed lesbian Ulrike Lunacek had advocated significantly  in the relevant equality committee for the measure. The MEP responded to the rejection of tts report with a hysterical attack, as representative Lunacek scolded: "With the vote of the European Parliament, it bows to the pressure of ultra-conservative and reactionary politicians and non-governmental organizations". The Estrela Report also wanted to restrict the right of conscientious objection by doctors, pharmacists and medical staff in connection with abortion, contraception and artificial insemination. (see the Estrela report and its rejection of the opinion by representative Ewald Stadler ) [Will finish later, perhaps].
The radical feminist group unloaded their protest by desecration of the Diocesan Cathedral Church of Bologna. It blames the Church for the rejection of the Estrela Report. The Archbishop of Bologna, Cardinal Carlo Caffarra had asked the MPs ahead of the vote in the European Parliament to vote no.
In a statement, the feminist church vandals state:

"We will not accept  these medieval politics and morality, this dirty mixing of political and religious power, which leads us back to the time of deaths due to illegal abortions.
We will NEVER return back [emphasis in original].
We demand that the conscientious objection reference is [Italian abortion law] prohibited on the law 194 for all advisory bodies and public institutions, because it represents gender, class and racial discrimination, and a violation of our rights to health and self-determination.
And if the Pope publicly declared that the Church must give space to  women, we take the opportunity to  just speak to the Madonna because she has also taken a Conscientious Objector on the way to Bethlehem.
Conscious abortion is a right of all women.
Nobody touches on our free sexuality!
And if the lifers, Catholics and Conscientious Objectors penetrate into the public hospitals and counseling centers, then we penetrate with our bodies, our desires and our self-determination into the churches! "

Claiming that a ban on abortion is misogynistic because women will die from illegal abortions conducted in back rooms is  part of the standard repertoire of the abortion lobby, which has long since been debunked as a propaganda lie. Recently, the militant attacks of fanatical supporters of abortion on Catholic churches accumulate. Signs of coarsening and increasing hostility to the church (see the reports of  Argentine Catholics protect Cathedral From Feminist Attack -    Pope Francis burned in effigy , as well as Pro-Abortionists  Violate the Cathedral of Santiago de Chile and Putin meets with Pope Francis - Church Enemies Desecrate Church in Rome "Until the Last Pope is Overthrown" )
Text: Giuseppe Nardi
image: Pro Life News
Trans: Tancred vekron99@hotmail.com
Link to Katholisches...
AMGD
Posted by Tancred at 10:15 PM

Believe or not, 'Claiming that a ban on abortion is misogynistic because women will die from illegal abortions conducted in back rooms is part of the standard repertoire of the abortion lobby, which has long since been debunked as a propaganda lie', it standard on Catholic blogs in my country where devil's advocates bring out their claws if one dares to say abortion is murder.

The Devil is enjoying the ascendancy in the world and the Church. Lord, help us remain true to the Faith and morals. St Michael defend us.

At least he jailed the bitches said...

10:45 GMT: Putin says he does not feel pity for Pussy Riot because they are in prison, though he does pity them for that, but because they started engaging in activities that were degrading to women. He notes, however, that they were not imprisoned for those acts. He continues that the amnesty was not intended for Pussy Riot's benefit or the Greenpeae activists, but rather it was intended as a component of Russia' modernization.

What these people have in common? Liberal education.

The universities were once strongholds of the Church, now they are the Devil's playground. They should be shut down, or reined into the Church once again.

Cows are out. Too late to close those barn doors now. The person most responsible for decades of woulda, coulda, shoulda is that Polish pope.

If they did this in a Mosque, they would have been post-birth aborted themselves.

Not a word of this outrage was reported in the mainstream media in Italy ...I am reading about it here for the first time..we are under a regime alright which is at all levels of life now that the INSTITUTIONAL Church has joined it....it is quite evidently clear that authentic Catholics will receive no support at all from those presently running things from the Vatican.

I know where I stand and its not with the modernists ....I can manage prayers for them - but they will never have my obedience.. God's Holy Church first, before Catholic Identity Wreckers!

Not yet, not while we are still breathing.

You have to remember, that while the enemies of the Church are busy contracepting, aborting, and sodomizing themselves to extinction, WE have children who we must poise to combat the enemy and restore the Church. That is, if the Muslims have not already overcome us, for they themselves exhibit the success of outbreeding the godless.

If the universities cannot be destroyed either by their own greed and evil or by political means, then we will have to encourage our existing parallel institutes and/or homeschooling, even if we have to break the unjust laws that make it hard for those institutes to be maintained.

But we must be firm and focused in our objective: to exterminate the spiritual disease, the symptoms of which are like this incident, among many others. (Remember that feminist rally in Argentina?)

The truth is that deaths prior to the legaling the slaughter of babies in the womb were an extremely small number -- and could have been entirely avoided simply by not hiring butchers to slaughter one's infant.

Further the deaths and maimings of women resulting from the hiring of butchers to slaughter their babies in the womb are STILL going on.

Just this yesterday, Friday, December 20, 2013 a woman getting an abortion at the mill I pray at was taking out the back on a stretcher and loaded into an ambulance.

It is absolutely a lie that legalizing the slaughter of infants in the womb has eliminated the harm to the women hiring the butchers.