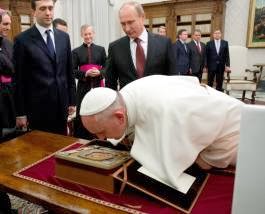 (Vatican / Moscow) On Monday, Pope Francis receives Russian President Vladimir Putin in audience. According to the official release to meeting by the Holy See, the situation in the Middle East and the Christians there was the focus for the 35-minute conversation, which took place in a "cordial atmosphere".  In addition to the help and protection of the Syrian Christians from their Islamist rivals, the Catholic community in Russia  was a topic of conversation. Unlike Western leaders, Putin had no difficulty expressing gestures of personal piety. During the meeting,  a church desecration took place in Rome by left-wing extremists who protested "against Putin and the Church."
The Russian head of state did not extend a future invitation. The Kremlin will not anticipate the Moscow Patriarchate on this issue."Conversations for a meeting between the Patriarch and the Pope are in progress," said Metropolitan Hilarion  a few days ago in Rome. A third country was envisaged as a  place of meeting.

Pope Francis gave Putin a mosaic that shows the Vatican Gardens. Putin gave the Pope an icon of the Mother of God of Vladimir. When the icon was presented to the Pope, it was a personal gesture of the Russian President, who crossed himself at the sight of the orthodox type icon.  Pope Francis, surprised by this gesture, followed the example of piety and crossed himself also in the Latin way,
Putin bowed before the icon and kissed the sacred representation. Even this gesture of pious affection was followed by  Pope Francis. Gestures that astonished the head of state of Russia in particular. Firstly, because one of the Russian leader had lived in the atheism of "real socialism" for a long time. On the other hand, because Western heads of state and head of government in the name of an alleged "neutrality" avoid  any personal commitment while in office. Putin was not afraid to express his faith in Christ and the All Holy  Theotokos in a public gesture of personal piety.
"Maybe the Pope could take one example, and kneel a little more before the Blessed Sacrament (during the Holy Mass and in Eucharistic Adoration) instead of standing," wrote Messa in Latino .

Sacrilege in Rome During Presidential Visit

During the meeting between Putin and Pope Francis, there was a serious act of blasphemy. Left-wing extremists of the Autonomous Scene broke into a church, unfurled a polemical and obscene banner, portrayed in the style of the  extreme left  political activists of Pussy Riot, and demanded their release.

The church desecration underlines that the extremists are not merely making  a political protest against Putin, but also specifically to express hostility to Christians. The fact that an Orthodox church in Moscow or a Catholic church was indiscriminately  desecrated a Rome shows definite hatred against Christianity. While in Russia, the desecration of a church is a criminal offense, the perpetrators in the west, so also in Rome, are hoping for "mild" judges who "understand" the show of "youthful" political zeal and the smashing of statues of Mary, the destruction of crosses as "too small" to cover those half-naked appearances in churches and obscene banners for prosecution.

Fight "Until the Last Pope, the Last Tsar and the Last King is Overthrown"

For blasphemous "act of protest" in Rome, the left-wing extremists wrote on her blog: "And let's not forget the role of the church, which measures interspersed with which the freedom of women and LGBTQI person to be circumcised.We are therefore convinced that the Holy Roman Church and the Orthodox Church find points of contact: an agreement between the Patriarchs at the expense of our body is always found. We will not stop and continue the fight until the last pope, the last Tsar and the last king is overthrown."
Text: Giuseppe Nardi
image: tempos / Messa in latino
Trans: Tancred vekron99@hotmail.com
Link to katholisches...
AMGD
Posted by Tancred at 1:13 PM

I'm a sinner, and a cynic, but I found it ironic that the Pope only made the Sign of the Cross after he observed Putin signing himself. The Pope only made an expression of veneration of the icon after Putin did. Sorry, I just can't get behind this guy, Pope Francis. I don't want to be duped by the President of Russia and we don't know for sure if his Christianity is real, but I suspect that it is. I suspect that our Pope is actually Catholic, but I sure would appreciate it if he'd be just a tad more blatant about it. Sorry for the sarcasm. I've got an attitude problem.

Pres. Putin and the Pope meeting and discussing things worthwhile is very good. The Pope and Pres. Putting doing their part in stopping the US dropping bombs on Syria is a very good thing.

Fight until the last heretic is burned at the stake, until the last modernist is silenced, until the last Marxist memory is purged, and the Cross of Christ placed in triumph at every Court of Law, every Institute of Education, every home, every heart and mind, and every princely diadem who will pay homage to the King of Kings!