Martin Mosebach: "The Only Chance For Summorum Pontificum is From the Influence of Pope Benedict XVI" 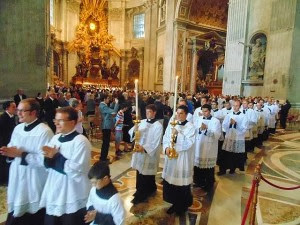 Link to Katholisches... AMGD
Posted by Tancred at 8:47 AM

Excellent article, but very scary!! We are worried as well.
Sometimes, we sicerely wonder if catholics in general and catholic clergy and Bishops are aware of that many non catholics are even making fun of the extremely poor standard of Music in the CC,
Just a few ex: priests, or some lay woman (mostly) proclaiming the Gospel, not with a Beautiful Hallelujah acclamation, but in a hurried manner, in a hushed and monotonous voice. Talk about DRY!
this is NOT what was intended! If already king David sang the psalms, why would this be considered unworthy today?!
Yes, indeed, most clergy 50-80 arte either genuinely disinterested (at best) in dignified Beautiful Music at Mass, or downright even openly demonstrating their dislike for it. The only thing they promote and enjoy is pop Music. Or no Music at all; vetry common. BARREN!!
Finally and with all respect; the translation of many articles is very poor. Evn difficult to understand the contents beacause of this.

The classic theological and liturgical traditions of the Roman Catholic Church were completely destroyed by Vatican II. The survival of these traditions is only possible outside the official Church, in groups like the SSPX and the Sedevacantists. One should forget all illusions that the near future will bring better times. The dynamic of liberalism and modernism is growing under Pope Francis, and both his despicable treatment of the Franciscans of the Immmaculate and his curial appointments make it more than clear that he is hell-bent on preventing the resurgence of all things traditional. My prediction is that Pope Benedict XVI's "Summum Pontificum" will soon be a dead letter and that permissions to celebrate the Tridentine Mass will no longer be granted. This Pope is of the social gospel and of a poor liturgical style.

We must remember though that the battle is the Lord's...the true Head is Christ...and if we diligently and faithfully strive towards holiness and the promotion of the authentic faith, (whose repository is the Immemorial Tridentine Mass), that ultimately there will be restoration. As for the time, that is the Lord's as well. The reality of it is that at some point it is a numbers game. Young men called to serve Christ are not filling the effeminized seminaries of the Novus Ordo but vocations continue to increase to Tradition. Additionally, the modernists are contraceptors. This dynamic will play out not only in the Church, but in society as a whole. The enemies in the Church both within and without will self-extinguish of their depravity.