Facts About the Intervention in Buenos Aires

Edit: because most of the other reportage is so woefully inaccurate and frankly spiteful, and that if you google this story, this is nowhere in sight, it seemed appropriate to post this link and a brief excerpt. Unless we demonstrate our love for the truth with a public witness and fight for it, it can't be worth much.  Our unwillingness to do things like this, in our opinion, is why we've lost so much in the past, and there's a long tradition of this sort of thing in Argentina where the Church was once much more healthy than it is today. 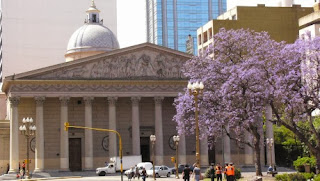 In reaction to some inaccurate reporting by the Associated Press on a demonstration during an ecumenical inter-religious event in the Catholic cathedral of Buenos Aires in Argentina, SSPX.ORG interviewed Fr. Christian Bouchacourt, District Superior of South America, to offer some clarifications on the matter, which we make available here.

The Jewish community has played an important part in Buenos Aires since the city’s foundation. In 2012, Cardinal Bergoglio (now Pope Francis), hosted in the Cathedral of Buenos Aires an inter-religious prayer ceremony that includes representatives of the Jewish community as well as Methodist, Lutheran and Presbyterian churches to commemorate the 1938 Kristallnacht and the deportment of Jews into concentration camps. During the first ceremony held in the Catholic cathedral and organized by the Jewish group, B’nai, B’rith, Rabbi Alejandro Avruj joined the ceremonies, lighting the menorah with Bergoglio and presenting him with a siddur.
The Argentina cathedral once again hosted the inter-religious ceremony on Tuesday, November 12th, during which a small group of around 50 Catholics prayed the Rosary before the evening’s ecumenical event began. One of the men also took the opportunity to use an open microphone to denounce the inter-religious act in a Catholic cathedral.
Link to Society Site...
Posted by Tancred at 4:44 AM

Shame on those who love lies said...

Those who despise truth in general, especially when it comes to those who rightfully defend Truth with regard the Church should ask themselves "Why do I hate and fear the truth of things?" "Why do I love all that is not Lawful and what has been condemned??" "Why do I not seek what is good, just and truthful as in commanded by the graces of my Baptism and Confirmation?" Then they should repent, cease acting like devils, and do penance for hating what God loves..and what God IS which is TRUTH itself!.

I agree with what the article says about the protestors having a right to feel outraged when a Rabbi presides over a ceremony in a Catholic Cathedral. But then, the bishop should never have allowed such a ceremony to occur in a Catholic church. It should have been held elsewhere.

Not that the Rabbi is a bad or evil person at all, but the situation just isn't right. What's even sadder is that some of the protestors were spat upon after one of the protestors started speaking through the microphone. What sort of person would spit on another person in a church? It's a terrible thing to do.

The rabbi might be a bad or evil person. Many of them are. It is very bad the way they are overbearing and persist in insinuating themselves into the Church and "persuading" the Church to "tweak" doctrine. It is very bad. It is the worst thing but by far not the only. Arbp. Poli says shalom. How dare he. I'm outraged at
hearing Catholic Clergy refer to evil rabbis by name as though they don't know what evil they have done. I'm outraged at Catholic Clergy saying shalom and shabbat and what? The day I hear a Catholic call Jesus "Yeshua" I will faint dead away. This is Covert
Creeping Talmudic Infiltration of Dimunition and any Catholic who sees it better Protest Loudly and Not Allow It! Wake UP Before It Is
Too Late!