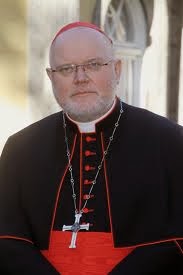 (Munich) The Archbishop of Munich and Freising, Cardinal Reinhard Marx, has proclaimed Christianity without hell and purgatory, only with more paradise, so to speak, a  Christian spa. Cardinal Marx belongs to the eight-member Cardinal advisory which  Pope Francis appointed  on 13 April  to advise him on the management of the Church. Cardinal Marx represents  Europe. Marx is also the Chairman of the Commission of the Bishops 'Conferences of the European Union (COMECE) and in the spring of 2014 a contender for the presidency of the German Bishops' Conference.
Cardinal Reinhard Marx held a spiritual talk on 9 November in Erding, Bavaria, a spiritual talk on "Resurrection". Here, the Cardinal tried to explain the Christian doctrine of resurrection: "Every person is a unique, eternal thought of God, who must be thought of to the end  and can not disintegrate into nothingness." And further: "If God wanted everyone from all eternity and love, you  everything can't be over in death".

God's existence only a "Possibility"?

But then the Cardinal faltered. The Christian belief in the resurrection depends, says Archbishop Marx, "that we believe God is possible."  God's existence only as a "possibility"? As the Archdiocese of Munich and Freising himself puts it,  the Cardinal continued by saying, if you trust the words of Christ, "Then the hope is justified that our death  opens a gate to something indestructible."
Today, said the Cardinal, many have a "cramped relationship" to death and the belief in the resurrection has become "weak". "We need to see everything, to touch everything, to understand it."  The Church must oppose to that  "strong rites and symbols"  laying out the coffin in the church, such as at a Requiem for a deceased. Children also should not deter you from confrontation with death, for example, the sight of a deceased person, but must enable them to encounter them and accompany them in this. "Therefore, the Church, and we can witness to that, that at  death a change takes place  and we are not before a cold nothingness," Marx said. The practice of the Church must make the hope of the resurrection  visible, reports the Archbishop.

The resurrection says the Cardinal, that God gives us the assurance that He will transform  and lead us with His help  to the end, "but without moralizing and without a hell of torture, imprisonment and a burning oven". The Church caused this with pictures like that of purgatory and hell, fear of death. Not only that, the Church must "repent" for this scaremongering images that a malicious invention will be obvious to Catholics  Cardinal Marx. In the Cardinal's words, "and for that we need to repent." And you wonder where the Cardinal actually lives. After half a century of the  abolition of the sign of hell, the problem is not the belief that there is a hell, but that many Christians no longer believe in the existence of hell and purgatory.

Cardinal Marx and Universal Salvation: no Hell, no Purgatory, only Sky

Finally, the Cardinal proffered a logical conclusion to universal salvation: Because  Jesus went about not to enumerate sins, but to pledge every man to healing and salvation. "The Church must completely drive out fear ,"  emphasized Cardinal Marx. To imagine what would come after death, the person needs images, "but this must be images of confidence, hope, images and help to continue on, even if they can not give us a definitive answer." What the Archbishop did was give the impression that the Church has not allowed in its two thousand year history, a great show to salvation, redemption and salvation of souls.

Marx's Recipe: The fear of death by the Allerlösungslehre scare?

However, the church follows the true union teachings of Jesus Nativity, which also says, "I will show you whom you should fear: Fear him, which can not only kill, but has the power even to throw you into Hell. Yes, I say unto you, Ye shall fear him "(Luke 12:5).. Or in his  Mount Olive Discourse: "Then he will turn to the on the left side and say unto them, Depart from me, you cursed, into the eternal fire prepared for the devil and his angels" (Mt 25, 41)
Christianity is realistic demonstration of creation, human nature and God's work of salvation. The denial of hell and purgatory is a betrayal of Christ and the believer. Whoever preaches a universal salvation, is in danger of leading people astray and will make them lose their souls. Anyone with a "warranty" claiming  death as a safe ascension and thus also denies purgatory, is robbing  the deceased of a means of grace that can be provided to them through the mediation of the Church of the living. It's also a swindle for the poor souls in purgatory.
Cardinal Marx proclaimed to believers, a homegrown spa Christianity. It's a misnomer, which starts from a false premise. People suffer today not from a fear of eternal damnation, but from a lack of the preaching the Christian doctrine.
Text: Giuseppe Nardi
Image: Wikicommons
Trans: Tancred vekron99@hotmail.com

Why the hell is this man still being treated as a Catholic, much less priest or bishop? With people like him as our leaders, we don't need any outside enemies to ruin us. Archangel Michael pray for us.

There's something very suspect about the German church, no doubt about it. Perhaps they can't get the Reformation out of their system.

These men are heretical Modernists. It is perhaps good that they have become so bold that they speak their errors out loud. It becomes easier to detect them and reject their false teachings.

Within the last week I heard another Cardinal declare at a Requiem Mass that the deceased was already in Heaven being kitted out with his wings and harp (OK- I made up the bit about the wings and harp, but not the rest). The Holy Father doesn't believe this nonsense -why does he choose to surround himself with brethren who do? Or has no one told him?

The realization is heavy that it was Benedict who gave him a red hat.

Cardinal Marx's theological musings don't sound kosher. But the C-8 is a curial advisory board, not the Congregation for the Doctrine of the Faith (a.k.a. the Holy Inquisition). The statement is a cause for pause but it does not necessarily indicate that The Church is going to Hell in a handbasket

Maybe he is a member of the Ecclesiastic Freemasonry, who will destroy the Church from within, as prophesied.

true, but we are now seeing, and which Francis is fighting against, is that a "mafia" runs the inside show...controlling who gets nominated to be bishop. Many wack jobs were nominated by Pope John-Paul II for the same reason....

Agree with above comment about Ecclesiastic Freemasonery,The smoke of Satan is destroying the Church from within

Who needs Jesus, when all these modern Churchmen have to put the silly man right ?

"The resurrection says the Cardinal, that God gives us the assurance that He will transform and lead us with His help to the end, "but without moralizing and without a hell of torture, imprisonment and a burning oven". The Church caused this with pictures like that of purgatory and hell, fear of death. Not only that, the Church must "repent" for this scaremongering images that a malicious invention will be obvious to Catholics..."

## Jesus spoke of "unquenchable fire", "everlasting fire", "where their worm dieth not", & so on. Simple, and terrible. Does it not occur to the Cardinal that the severity & eternity of the punishment of damnation is:
a) deserved
b) righteously inflicted
c) not a jot more than is deserved
d) a revelation - for which we cannot be too grateful - of the unspeakable horror of sin
e) an indication of the greatness of the love of the Crucified God-man ? Sin is so great an evil, that it took the Blood & Death of God Incarnate Himself to save us from an eternity of damnation

But none of that does the cardinal say :(

Having grown up in a new age, former Catholic family; I know first-hand how damaging this false teaching is to souls. By the Grace of God, I found the Truth.

I'm sorry but your post is invalid. You started with the question: "Why the hell is ...." Lynda, there is no hell remember!

more heresy--why they are not removed is beyond me.