Papal Nuncio to Indonesia: The Differences Between True and False Reform 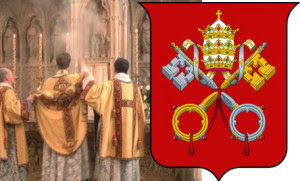 (Jakarta) on the 15th of October Archbishop Antonio Filipazzi, the Apostolic Nuncio to Indonesia, just opened a meeting there on the 50th Anniversary of the promulgation of the Constitution Sacrosanctum Concilium of the Second Vatican Council. In the celebration of Holy Mass to begin the meeting, he delivered a sermon to be reproduced in excerpts. In it he talked about the primacy and beauty of the liturgy and criteria to distinguish true and false reform.

Nothing has Precedence Over the Liturgy

First, the nuncio stressed the importance of the Mass. It is neither a "secondary" nor a "purely formal" act or just an "accessory" for meetings and conferences. Rather, "the celebration of the liturgy even has priority over study, it remains infinitely greater and more important than all our thoughts about them." The Constitution Sacrosanctum Concilium recalls the words: "From this it follows that every liturgical celebration, because it is an action of Christ the priest and of His Body which is the Church, is a sacred action surpassing all others; no other action of the Church can equal its efficacy by the same title and to the same degree."(SC 7). Nuncio Filipazzi urged cultivation and promotion of this awareness. The sacred liturgy should therefore "never be reduced to an arbitrarily manipulable object", as Pope Benedict XVI. has stressed. "Unfortunately it is perhaps that the liturgy seen is seen as an object that is to be reformed, and not as a subject capable of renewing Christian life - - even by us pastors and experts" (Speech to the staff of the Pontifical Liturgical Institute, Sant'Anselmo, 6 May 2011).

"We must approach the liturgy, be it when we celebrate it, as well as when we study it with the awed attitude of Moses, when he approached the burning bush, signs of the presence of the living God," said the Nuncio.

Neither the Holy Mass should be regarded as a mere formal gesture that set, because it is just as common in church meetings. Instead, the Council's Constitution recall that "the liturgy of the peak, where the action of the Church tends, and also the source from which all her power flows" (SC 10). "From this source of grace celebrated the sacred mysteries of the Church is also the light and the strength to think about the liturgy," Archbishop Filipuzzi. "The just shall live by faith" (Rom 1:17), St. Paul quoted in Romans, the prophet Habakkuk and remind us that the faith is the principle that everything must enlighten and guide our lives, because it related to the "impact of the liturgy on the reality that God and the salvation of concern," the nuncio. The deepening of the study of liturgy could therefore only be performed by the "light of faith".

"This session we will start on the anniversary of St. Teresa of Avila, Virgin and Doctor of the Church. The commemoration of the saints highlights an important dimension of the liturgy, which is pronounced in every Holy Mass at the end of the Preface: And so we join the angels and saints, and we sing the praise of your glory: Holy, Holy, Holy God, God of power and might. Heaven and Earth are Full of your glory. Hosanna in the highest.

Earthly Liturgy as an Anticipation of the Heavenly Liturgy

The conciliar Constitution brings this dimension of the liturgy follows the expression: "In the earthly liturgy we take part in a foretaste of that heavenly liturgy which is celebrated in the holy city of Jerusalem toward which we journey as pilgrims, where Christ is sitting at the right hand of God, a minister of the holies and of the true tabernacle; we sing a hymn to the Lord's glory with all the warriors of the heavenly army; venerating the memory of the saints, we hope for some part and fellowship with them; we eagerly await the Saviour, Our Lord Jesus Christ, until He, our life, shall appear and we too will appear with Him in glory."(SC 8).

In the liturgy, the sky opens to the earth (cf. Benedict XVI., Esor. Ap. Sacramentum Caritatis, 35), God shows himself to us in all His majesty, and we encounter Christ. See the glory of God in the creation of the world as St. Paul calls to mind and as the Church in prayer says. Therein lies the beauty of the Divine Liturgy, the earthly liturgy of the Church, "a beauty that is inherent in the liturgy and does not depend on our efforts to make it beautiful by human agents that do not conform to the liturgy," said the Nuncio. The intrinsic beauty of the sacred celebrations acts of itself, "and not to have celebrated in our way through, as we think of the liturgy, so that it radiates this divine beauty."

"Unfortunately, the mentality and the resulting practice has spread, according to which the liturgy must constantly change, adapt to different communities and should be made interesting by our inventiveness. Celebrations that spring from such thinking as this will not show the real beauty of the Church! Already the craving for new tools to make the liturgy interesting, have already shown how fickle and fleeting this contrived beauty is which is created by us," said the Nuncio. "The Holy Spirit enlightens the work of this conference and the liturgical life of Indonesia, so that the true nature of the beauty of the liturgy is always better recognized and understood, and all the priests and believers are trying to make them shine in every celebration," said Archbishop Filipuzzi.

The Nuncio then asked how the saints, for example, St. Teresa of Avila, can help ain the understanding of the liturgy today. The life and work of Saint Teresa of Avila was performed in a time that was marked both by the appearance of Martin Luther's Protestant Reformation, and on the other hand the Catholic reform, and thus, the response of the Catholic Church on the need for renewal in the Church, which mainly concretized in the Council of Trent and in the work of many saints of that century. At the time of the holy Carmelite, therefore, there were two forms of "reform" present: a reform that broke up the visible unity of Christ's Church, and reform, on the other hand, producing a new flowering of Christian life, which has rich whose benefits for us.

Church History knows many examples of true and false reforms "History shows us that in almost every era in the Church encountered true and false reforms. Rather, even within each process for the renewal of ecclesial life, mixing elements of true reform and other, such that it impoverished and defaced the face of the Church. It is therefore necessary to clarify the criteria for identifying to distinguish between the true and the false reform.

These criteria can not be subjective or simply pragmatic, but must be criteria of faith, because the Church is a divine-human reality that can be truly realized only with the light of divine revelation. If we consider the two thousand years of experience of the Church, we can identify some criteria.

"Light and Shadow" Since the Council - St. Teresa of Avila, however, Only Light

"These are the criteria that should guide the implementation of what the Second Vatican Council established 50 years ago in the liturgy. This half century saw light and shadow, positive and negative aspects of the liturgical life of the Church. It is also was associated that the instructions of the Council were not always implemented according to the principles of a true Church reform.

If we look at the life and work of Saint Teresa of Jesus, we see the full realization of the requirements for a true renewal of the church. At the end of her life, she could exclaim with good reason, I am a daughter of the Church, "and therefore she gave the Church impetus for a real and lasting renewal. We ask her for her intercession, so that the considerations of these days, but especially the liturgical life of the Christian community in Indonesia, will be conducted always of those true criteria. " Text: Giuseppe Nardi Image: Cantuale Antonianum / Vatican Trans: Tancred vekron99@hotmail.com Link to Katholisches...