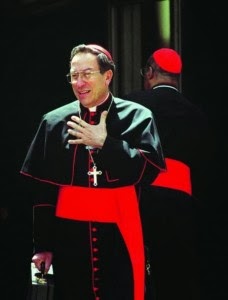 Link to katholisches...
AMGD
Posted by Tancred at 10:20 PM

So by reform of the Curia, we mean another superfluous expansion of the administrative apparatus? Sigh...

I thought the Catholic Church was the congregation for the laity. I mean to say why was it established if not to teach the Gospel to all men and provide the sacraments necessary for eternal life. The only thing we need is for our priests to be good priests, our bishops to be good bishops and our Pope to be a good Pope. We do not need a false congregation to pretend it represents us. What happens in the end is these middlemen usually only represent themselves usually to the detriment of those they are supposed to support.

Oh dear. It sounds too much like the makings of a CoE synod and look where it's got them. Still, as one future Catholic bishop once mused: "They have all the best ideas . . . . .. "

This married man and the colleagues he's trained will happily relinquish serving at Mass and depart the sanctuary as soon as clergy and seminarians, properly trained and reliably available, begin appear in numbers adequate to to enable worthy celebration of the liturgy. Till then, Catholics who wish to see ceremonial well supplied and supported will do well not to scorn the sacrifices of lay men -- even the defiled married ones -- who deny themselves much so that God may be glorified and souls drawn to Him.

No more of this, please.

Ven. Archbishop Fulton Sheen stated that the reform of the Church would come about by the laity. This new Congregation just may be a good idea. Then we Traditional Catholics would storm it with our demands that they take the Church's official condemnation of the heresy of modernism seriously. We could point out their modernist heresies and get our Church back. We Traditionalist are known to demand God's greater glory and honor and not our own.

So now we can look forward to having some definitive legislation on how far the divorced and remarrieds and sodomites (practicing) can actually get involved in the life of the parish without causing scandal to faithful practicing Catholics. No more whim of the local parish priest or bishop forcing the "pastoral solution" on to all parishioners.

...Can't wait for the new Congregation...