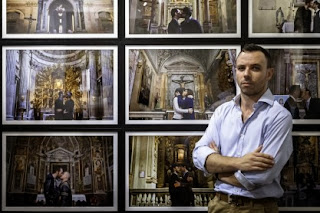 (Rome) Peddlers of homosexuality and women in gowns  plop  in front of the most beautiful and oldest Roman altars. This is not a tasteless joke, but the latest provocative and heretical work of "artists" Gonzalo Orquin and Mauro Maugliani.Together with Luis Serrano they are showing from the 25th September, the exhibition Trialogo in the Galleria l'Opera in Rome.
With the issuance of a new exhibition  by the gallery of contemporary art the space is opened by Andrea Iezzi . He is supposed to provide space "unconditionally for all the new trends in contemporary art". As is apparent from the invitations to the exhibition opening, "the three artists were invited by journalist and art critic Edoardo Sassi,  to present faithful works to design non-conventional issues to non-conventional types: religious women, weddings, interiors are the accents of the strange community exhibition. The "creative" artists responded to the invitation with "paintings, sculptures, places, videos (cemeteries, sung rosaries), speaking sofas, kissing  with the reek of heresy, at the foot of the altars of some of the most important and ancient basilicas of Rome."
The 32 year old Spanish photographer Orquin from Seville addressed the issue of "marriage" and "marriage" from a "double perspective", as stated in the invitation. On the one hand by showing a young "bourgeois"  couple. And another that is supposed to be from "utopian" perspective, a "universal message of love, through the collective action against the backdrop of historic churches in Rome." The people in the pictures are friends of the Spanish photographer who arrived there in the early morning hours, just after opening the churches for their strange "project".

The painter Mauro Maugliani shows in the exhibition, however, his "personal journey through the world of nuns." The result was a "large portrait, which plays with the ambiguity of gender and identity." So he shows "a young religious woman wearing a priest robe." A sculpture made of sugar reminds the world of its saints and relics. Another installation shows a video of an old knee stool, but this is in a pop setting.
The exhibition of Trialogo  is a striking example of the fact that a certain part of contemporary art can think of nothing better than to offend the sensibilities of the faithful. Art is confused with mockery and desecration and profanation of the sacred space by obscene acts which are expressly condemned by the Catholic doctrine, a show of arrogance and contempt for the opinions and feelings of others, which is frightening. There is complete silence about the insult and disrespect to God. The exhibition in Rome represents another unacceptable provocation by the enemies of the Church. It is hoped that a voice rises sharply from the Church hierarchy in defense of the sacred and lodges a protest.
Text: CR / Giuseppe Nardi
Image: Corrispondenza Romana
Posted by Tancred at 1:10 AM

Thank you Pope Blessed John 23rd and all subsequent Popes who chose to silence the voice of condemnation.


That you Pope John 23rd and all subsequent Popes for your opening to the world and your ceaseless chatting with your enemies while you punished traditionalists.


Thank for Pope John 23 and all subsequent Popes for saying that you read the signs of the times and the maturing of the world and that you understood that the "negativity" of traditionalists was to be ignored.

Thank you Popes for succoring society's sappers while you destroyed the Roman Rite and stuck your damnable wooden tables in front of the gorgeous High Marble Altars in the beautiful Churches in Rome; you have trivialised the most Sacred and Incomparably important act on Earth - The Mass - and treated it as though it were a Rachel Ray Recipe for which any ingredient could substitute for another.

Without your craven capitulation to this crummy culture, these worthless bastids might be ashamed to appear in public - to say nothing about darkening our most Sacred Sanctuaries.

If I was in Rome this crap would not be standing there unless it was guarded 24/7 for I would DESTROY IT and leave it in pieces in the gutter where it belongs.

I hope there are enough Catholic men left in Rome to do just that.

I see that even those who live lives pleasing to Satan seem to know what is holy and where to find it. It wasn't the Cranmer table he abused. Who let his kind out of the closet anyway?

Excellent commentary, Not Spartacus. Quite right!