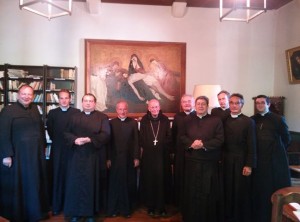 Edit: the problem is the return of the creatures of +++Sodano and the Old Liberals against Benedict's regime.

(Paris) The General Chapter of the traditional Institut du Bon Pasteur (Institute of the Good Shepherd) was elected on the 12th of September, the Feast of the Holy Name of Mary in Fontgombault Abbé Philippe Laguerie back to the Superior General. Assistant to the Superior General, Father Abbot Vella Yannick, pastor of Saint Eloi and Father Paul Aulagnier, rector of the St. Vincent de Paul Seminary of the Institute were elected. This ends a dispute over the general management of the Institute, which had broken open at the General Chapter of 2012.

The Institute, a society of apostolic life of pontifical right, was recognized ad experimentum by Rome in September 2006,and thus returned to full communion with Rome. Father Laguerie had in common with others of the Society of St. Pius X, separated and founded his own institute.

In the wake of an Apostolic Visitation, which took place under the leadership of then and now renewed Secretary of the Pontifical Commission Ecclesia Dei, Monsignor Guido Pozzo, there was some internal unrest in the institute. The visitor had asked the Institute to affirm the Second Vatican Council in its formation of priests and to use the Catechism of the Catholic Church in its revised edition from 1997 as the authoritative basis of the Church's teaching. In addition, there can be given no categorical refusal of the celebration of the Novus Ordo. Reasons for criticism were also found in some critical articles about post-Conciliar developments that had been written by priests of the Institute.

The Roman measures have strengthened the critics an agreement with the Holy See within the SSPX, which appeared to be within reach in Spring of 2012.

At the General Chapter in May 2012, Father Laguerie was not confirmed as Superior General, but a younger Director was elected under the new Superior General Perell Roch, who took a more critical position against the Roman principles. However, the electoral process was controversial because of a re-election, and was challenged by Father Laguerie. In July 2012 the new CDF appointed by Pope Benedict XVI., Curial Archbishop Gerhard Ludwig Müller, became President of Ecclesia Dei confirmed the opposition to the former Superior General. In April 2013, the Vice-President appointed by Ecclesia Dei, Curial Archbishop Augustine Di Noia convened as acting superior general of the Institute with the Abbot Emeritus of Fontgombault, a new contract with the General Chapter and to repeat the election of the General Government. The term of office of the newly elected General Council will last until 2019.