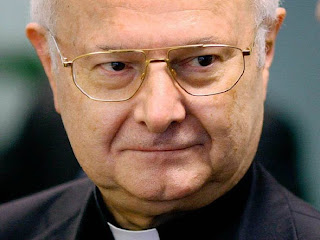 (Freiburg im Breisgau) "I admit that this message of the day delighted me." With these words, the Spanish church historian and Catholic blogger Francisco de la Cigoña, addressed the resignation of Archbishop Robert Zollitsch of Freiburg and his imminent departure as chairman of the German Bishops' Conference in March 2014. The title of de la Cigoñas comment can not be reproduced in full here. It reads: "Remarkable Kick in the A... to Zollitsch".

"Robert Zollitsch, who had been Archbishop of Freiburg since 2003, is in my opinion one of the worst bishops, not only of the German church, but the universal Church. He became the unusual object of attention for Pope Francis. He quickly put him on the road, just one month and eight days after reaching the retirement age, as this is actually usually done only for really sick or really disastrous bishops," says de la Cigoña.

"He was also Chairman of the German Episcopal Conference, Conference of Bishops, a disaster, what action can be more surprising," says the Spanish historian.

One Spanish Bishop is 77 and his resignation still hasn't been accepted.

He reminders me a lot of the character off of Seinfeld named Newman (portrayed by Wayne Knight).

At least in the picture posted here he has a very striking resemblance.

But about Zollitsch...my advise to everyone is please do not expect his successor to be any better. He might be moderately better. Considering this Pope, he could also he more of the same ideology as Zollistch, or even more radical.

Please don't get hopes up and expect an orthodox/conservative...or a traditional minded man. Under Benedict XVI the chances for this was 60/40. UNder Francis, it's ZERO.

Why should Pope Francis get the credit for this bishops early resignation? There is something missing in the narrative here.

Because he's the one who accepts the resignation, maybe?

Deo gratias, but God save us from Francis clones