Feast Days For the Franciscans of the Immaculate in the Immemorial Mass of All Ages -- 12 New Novices, 16 Temporary Vows 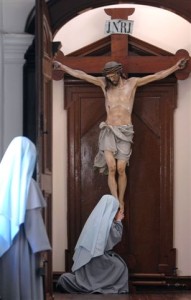 Yesterday, Friday, 16 Franciscans made first vows. On both days, the Holy Mass was celebrated solemnly in the Traditional Rite, as has been usual internally for the order for several years. Till the 11th of August it is still possible.

The celebrant was the General of the Order, Father Gabriele Maria Pellettieri, who founded the order together with Father Stefano Maria Manelli. Father General Manelli conducted the investiture of postulants and the temporary vows of the novices.

There were still two large solemn occasions for the vibrant order before the Decree of the Congregation of Religious enters into force. The two liturgies reminiscent of past times, as now so rarely can orders absorb new members in such numbers today in Europe. They testify to the vitality of the Catholic Church, despite the rampant secularization of the world. Before the Order moved to the Old Rite upon the Motu Proprio Summorum Pontificum , the number of novices was lower and they even came mainly from the Philippines, where the Order began its early work. On Thursday and Friday it was noticed that the new entrants seem to all come from Europe.

Father Stefano Maria Manelli spoke with the greatest inner peace of mind to the nuns and novices. His remarks focused on the holiness of life as a nun. Nothing pointed to the dramatic intervention in the religious life of the order by the Congregation of Religious.

While the Minister General, deposed by Rome, placed wreaths on the Novices for their profession, the sister choir sang the Veni, sponsa Christi, quam tibi Dominus accipe coronam preparavit in aeternum .

Requests for permission to be allowed to celebrate in the future in the Old Rite have to be judged for each individual priest and each community separately says the Apostolic Commissioner. Whether these can be addressed directly above or have the permission of Rome (which location?) must obtain, is unclear. There are, nevertheless, that a large part of the Order that still wants, despite these rules, to continue the Old Rite hold and to make such requests.

Tell me again why this is being banned? Is it because there really is a desire for all orders to die out; is that it?

The modernist progressive means have been most successful to the killing of orders after all. And if that is the goal then we know why this is banned.

All the more reason to pray unceasingly to our Blessed Mother that justice is done in this case,that those members of the order who wish to continue celebrating the immemorial rite will be allowed to do so in peace.

The progressive Orders are all dead. Only those which have remained "conservative", or traditional are at least stable. Those that are the most traditional are growing the most.
This is why the Vatican wishes to stifle the Traditional Latin Mass and the Franciscans of the Immaculate. It is because the progressive reforms of Vatican II in religious life have been a huge disaster, and once flourishing Orders like the Jesuits, Redemptorists, Benedictines, Trappists, Salesians, and Franciscans are rapidly collapsing. Here's a quick look at the disaster:
Before 1965:
Jesuits: 36,100 members
Franciscans (OFM): 28,000
Capuchins: 15,500+
Redemptorists: 10,500
Salesians: 22,550+
Trappists: 6,000
Benedictines: 12,500+

This is not to mention the 440+ Orders of nuns around the world (mostly liberal feminist communities in USA and Western Europe), which have now less than 100 members are and on the point of extinction.
Even huge Orders of nuns in flourishing communities like the Daughters of Charity(50,000 before Vatican II), Sisters of Mercy(30,000+ in USA,Ireland, and Australia branches) Religious of the Sacred Heart(St. Madeline Sophine Barat)(7,700), Sisters of the Good Shepherd, School Sisters of Notre Dame(both over 12,000) Franciscan Missionaries of Mary(8,800) and Missionaries of the Sacred Heart(Cabrini nuns-2,100) have collapsed to 16,500, 6,100(in USA,Ieland and Australia branches), 2,311, 3,349,3,100,5,200, and 298 respectively (2013).
For traditional Orders to be growing is a supreme insult to the liberal Vatican II trash who will force the "reforms" down faithful Catholics throats until the Catholic Church is transformed into the same as a protestant "church", in which case the Catholic Church will be dead.
Faithful Catholics must oppose this, even if it is opposing the Pope. We must also oppose the neoconservative Catholics such as EWTN, and other groups which would applaud the Pope and others dancing around saying Mass in a clown suit.
I hope the SSPX experiences tremendous growth, and a rising tie of both new Orders of religious and Faithful Catholics coming to it.