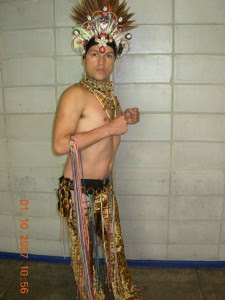 (Rio de Janeiro) Fly, who was engaged as a choreographer for the World Youth Day 2013 in Rio de Janeiro,   has  posed naked for several gay (aberrosexual) magazines in the past. The flash mob back was organized by him in the dancing, instructions of the choreography of the bishops on the stage and the famous controversial pictures that went around the world with which ecclesiastical authority was held up to ridicule. Fly, since 1986, a professional dancer, is considered a renowned choreographer and has a reputation mainly in Brazil in his field. Nevertheless, the fact raises some questions.

"Every human being deserves respect, no question. But respect is one thing,  a very different of kettle of fish, " says Francisco de la Cigoña. The Church historian and Catholic blogger thinks so that cherishing and preference goes far beyond what is called respect. "I personally pay tribute to the former, of course, even homosexuals. Of the later, for those who come, for example, to Gay Prides, where some mock the Church attired in Bishop robes and Pope Robes, nothing," says de la Cigoña.

"Among hundreds of capable choreographers available, you had to choose this one?" asks the Spanish historian. "Must the Church now really bring all Riccas to power? Do they have a lobby or not? 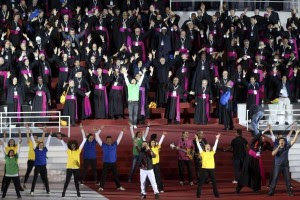 Flash Mob dancing bishops, because it is so "cool". I find the message of concern. And the bishops are still there dumber than they only stood there," says la Cigoña, referring to the self-abasement of the flash mob as they followed the instructions of the two choreographers Fly and Glaucia dancing the Francisco Song, the World Youth Day song in honor of the new Pope.

In the ecstatic rapture of World Youth Day participants who reported for the Catholic broadcaster Radio Horeb at Copacabana, everything was "cool" and a "great feeling". It just sounded like this (found on the website of the radio station ):

So, where were we ... ahja, at the vigil yesterday. It was just mega! 2 million (or more) young people on Copacabana beach ... all waiting for the Pope ... to shorten the waiting time we have diligently practiced the flashmob for Papa Francesco. It was really a hit! The song was totally catchy, and the movements moved the time, the heart and blood. Most were already on their plots, where they are eating their pilgrimage packets, etc. - but when over the loudspeaker came the word "FLASHMOB" all jumped up and got ready for the joint "Daddy Dance"! Guys, this was sooooooooooo awesome! And was the most brilliant attainment of the evening as well - have invited bishops to join the mob - waiting on stage. That was a picture of gods, as the bishops were dancing up there (on our Facebook page, there's a video of it!).

It is a betrayal of Tradition for any Catholic to express respect for a sodomite.

Imagine a Catholic expressing respect for a counterfeiter, a drug addict, an abortionist, or, perhaps worse, one who watches Rachel Maddow.

Basic respect, compassion and even sympathy for fallen man? Why not? Anyway, Cigona isn't a fire breathing Sedeprivationist, he's a regular family man and a great source if information.

Why is anyone surprised? This is the Catholic Church of John Paul II...and now after 8 years of a real Catholic Pope, the Church of JP II's clone, Francis I.

The flashdance bishops show was sick. They are too stupid to realize that the whole world is laughing at them after viewing it on Youtube. JP II would have loved this stuff.
WYD was his creation, and it's a circus.

Speaking of YouTube...I found this. It's Japanese Buddhist monks using a Catholic basilica (2002) for a show of their religious ceremonies and chants.
Disgraceful!

I think it's a Catholic basilica they used because it looks like a Baroque Church and they probably used it for the good acoustics.
If it's a Lutheran "church", who cares what they do....but if it was Catholic, it's outrageous and a disgrace. Back then, JPII was still alive, so I guess they considered it normal.
http://www.youtube.com/watch?v=IPbB3hDkzTk (the link)

Fr. McMahon of the SSPX and his congregation protested Buddhists using the local Cathedral in his area.

It very well may be the agenda of some of those who hate the position of the Church on gays to undermine the authority of the bishops by encouraging them to dance in the way some did. I have gone on record never supporting WYDs, as abuses are too common.

It's absolutely disgusting that this man should be chosen as choreographer for WYD. It shows how low the Church in Brazil has fallen. But then, should there really be dancing at all at WYD, so as to require a choreographer? I don't think so.

No surprise there. It was all probably a dress rehearsal for the Olympic Games. Who am I to judge?

This information seems to conform perfectly to everything else that's been reported from Rio. Nothing discernibly Catholic in anything I saw, and much that was anti-Catholic. The reception of Our Lord in the Holy Eucharist at the Mass on the beach makes me cry in shame.

"Nothing discernibly Catholic in anything I saw"

That's how JPII, the creator of this circus, and his advisors wanted it from the beginning. They wanted a great big, warm and cozy, friendly, inclusive free for all. And that's what they create every time.

The only Catholic part of WYD was where the Tridentine Latin Mass was available.

The music during the whole WYD was garbage. It could have come from any USA or Brazilian Pentecostal "church", and probably did. The waving hands just like the Born Again Christians was disgusting. There was nothing that looked Catholic. The Pope himself did not look especially Catholic.
Benedict XVI did, at the last WYD.

One question. Why do they have WYD every 1-2 years. After all the awful music, dancing, and disrespectful, protestantized events, you'd think that the Catholic Church and organizations like EWTN etc. would be sick of spending the money to cover this kind of side show.

RESPECT. Esteem for someone or something, arising out of special regard for that object because of his, her, or its excellence. More properly it refers to persons, and it refers to things only because of the persons with whom they are associated. It implies a deference to the one respected and to that extent a sense of inferiority in the one who has or shows respect. (Etym. Latin respectus, a looking at, by or with a regard; relation, proportion; from respicere, to look at, look back upon.)

OED probably has at least 20 definitions of the word as it appears in standard English usage.

Charity. Starts at home when you invite other religions into use the catholic churches and refuse. The tridentine latin mass to be said in them one can only. Expect confusion. About. Ones faith after all the church. Was wrong. For 1900 hundred years!

I don't know where you get "real Catholic pope" about of your reference for Pope Benedict XVI because he repeated some of JPII's nonsense and falsely beatified him. It may have been Pope BXVI who by authority as pope did release the true Mass from bondage but that was because of pressure from His Lordship Bishop Fellay, who refused to engage Rome any further until the Mass was unchained. That is a fact. Pope Benedict XVI "come clean" on many issues such as admission of the "excommunication" of the SSPX being false, admission that the Third Secret is yet to be fully revealed, that the Mass was never abrogated, and hoping to rectify decades of injustice against the SSPX ( albeit foolishly attempting to do so while obstinately clinging to the Council god, it's false doctrines and it's false mass )

As far as I am concerned, the last holy and truly Catholic pope was Pope Pius XII. But as God is in charge and He permits these things for His own good purpose, we should just keep on praying for all the popes, both living and deceased. And "retired".

Dear Tancred. The naturalism encompassed in the definitions of the OED may be of general interest but they are hardly determinative for those who claim to follow Tradition.

I believe sodomy should be punished under the civil law, but such crimes do not exempt is from treating such persons with the respect due to one who was created in the image and likeness of God.

Dear Tancred. Such an idea would necessarily require us to give respect to everyone - from Mao, to Stalin, to Hitler, to Judas, to Pilate, to those who stoned Saint Stephen, to The Sanhedrin members, to John Wayne Gacy to the local late term abortionist for they too were created in the image and likeness of God but I had thought that soi disant traditionalists were more discriminating in drawing distinctions amongst God's creatures and choosing to whom one would identify as worthy of respect.

In any event, there seems nothing to be gained by pursuing this so I will just stop.

Traditionalists aren't exempt from the councils on charity.

View the "Homosexuality Catechism at World Youth Day" on Youtube . . . my transcript of Bishop Hurley is on my Fidelity and Action blog: http://fidelityandaction.wordpress.com

Gotta love this "New Springtime" that we've been having!

Please, let this be the last World Youth Day...

I Am Not Spartacus is right. Jesus said: Love your enemies, He did not say to love God's enemies, in fact, of them, He said, "Do not cast your pearls before swine," and, more to the point "Do not give that which is holy to the dogs."

I try to assume the best sight unseen.

When we use words, we use them to convey some meaning that they have become associated with in the history of the English language. To say that this is just "naturalism" and irrelevant for "those who claim to follow Tradition" is not correct. The customary meanings (plural!) of words is the necessary groundwork for any conversation, theological or otherwise. There is no such thing as a divine traditional Catholic language, only human languages used by the Church (not, of course, denying the special preeminence of latin).