Pro-Life Doctor Xavier Dor Condemned -- A Desire to Save Lives and Mental Illness?

(Paris) Faster than expected, the judges of the 31st Criminal Chamber of the Paris Court have reached their judgment. The prosecution accused the Pro-Life Doctor, Xavier Dor, of recently praying the rosary publicly "without permission" ( see separate report ). In addition, the physician and president of the right to life organization SOS Tout Petits was alleged to have exerted "mental and psychic pressure" on women determined to have abortions, because he had given the gift of baby slipper to two pregnant women who wanted to kill their unborn children by abortion. 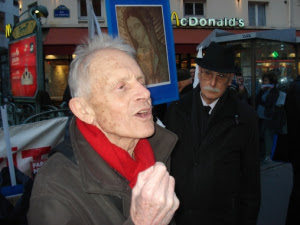 Dor defended himself in court with a reference to the right guaranteed in the Constitution, the (mythical) right to freedom of expression. But the 85 year old doctor was found guilty as charged by the judges. Although freedom of expression is a valuable commodity, say the judges, yet it still has limitations: the respect for the other, in the specific case of the women. Given the fact that they were about the murder of another person, namely the unborn child, it was a masterly euphemism.

Because of his age he is expected clemency. The Criminal Court accepted the proposal of the public prosecutor and sentenced Xavier Dor to one month imprisonment and a related 8000 euro penalty. His efforts to persuade women to save the life of their children, was thus declared a criminal offense. But this was not enough, the judge sentenced the doctor also to a "little psychological therapy."

Because the French judge is therefore not so mentally disturbed, he who kills innocent children (or correspondingly demands legislation for killing and decides on it), but who is committed to the lives of the most vulnerable. Yet it is not clear what kind of "psychological therapy" should be imposed on the doctor, given the fact that Xavier Dor sees its struggle as a "spiritual struggle and resistance against the culture of death."

The judgment clearly shows that the attempt to bring into line the (true) right to life for children and the (wrong) right to abortion can not be brought on behalf of female self-determination. The one excludes the other, which all people of good will have always known.

This is probably a glimpse into our future in the US. Both countries are revolutionary Enlightenment republics founded by godless Masonic intellectuals for the most part. Most significantly both have embraced a Talmudic system for interpreting law whereby it means whatever a panel of judges say it means.

In Planned Parenthood v. Casey, 505 U.S. 833 (1992) the Supreme Court explained its contraception and abortion decisions thus: "these matters, involving the most intimate and personal choices a person may make in a lifetime, choices central to personal dignity and autonomy, are central to the liberty protected by the Fourteenth Amendment." And then: "At the heart of liberty is the right to define one's own concept of existence, of meaning, of the universe, and of the mystery of human life." The Court trotted out the passage again in 2003 in Lawrence v. Texas, 539 U.S. 558, to rationalize constitutional protection for anal sodomy between men.
This represents a complete rejection of Natural Law and Logos, the same type of thought that led to the travesty shown in this article

Right Anonymous, this is the System, the Commodification of
the human person.

Tyrannical persecution of those who refuse to go along with the lies and stubbornly speak the truth.

Those who resist the secular government are heroes.