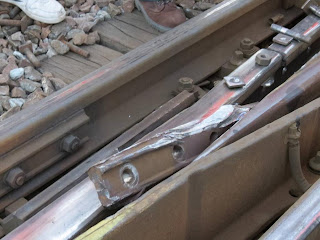 Edit: in light of the Pope's recent statements in Lampedusa  , this story is not going away.

No sooner did the train crash after the rails had been sabotaged, but then some of the local youth descended upon the train to rob the dead and wounded.  This report, which was made by the CRS (riot police), an official police source, is being somewhat contradicted higher up, by the Red Cross and Emergency administration.  During the riots in 2005, there were also arson attacks in the neighborhood of this suburb by Muslims.  This from Galliawatch:


The article goes on to say that the District Attorney of Évry has opened a preliminary investigation of gang theft with violence. Five persons were arrested, then released when searches of their homes came up empty.

Le Point concludes by saying that these revelations will no doubt create a controversy. Especially since the Alliance police union described scenes of pillage. Even though these declarations were virulently denied by numerous Socialist leaders, the summary by the DCCRS seems to vindicate Alliance's accusations.

Many Le Point readers thank the journal for having the courage to print this information.

Below, another view of the sabotaged track. That piece lodged in between the rails is what caused the "accident". It could not have become unscrewed (note the holes where the bolts were removed) on its own.

What monsters! Where are the crusaders when you need them?

Pope Francis needs to think further on the Muslim problem in France for example.