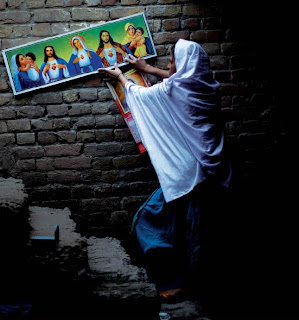 (Islamabad) The now 42-year old Catholic mother has been unjustly accused, since 2009, of insulting Islam. It is a triviality to charge someone and put them in jail for this offense. It may lead to harsh prison sentences. Asia Bibi was sentenced, however, in the first instance by a court, to death. Since then, she is waiting on death row for her appeal.

For 1,500 days Asia Bibi is innocent and in prison. A "wrong" word, refusing to convert to Islam and the trap has snapped shut. Asia Bibi was reported by Muslim women, work colleagues, who were supposed to be friends. But Asia Bibi faces a stigma: she is Christian. The police arrested, allegedly to protect her, because Muslims want to practice their hangman's justice. A more accurate legal review of the indictment did not take place.

The scandal ensures worldwide attention. The Catholic minority minister Shahbaz Bhatti of Pakistan campaigned for her release and was assassinated by Islamists. The Muslim governor of the home province of Asia Bibi, Salmaan Taseer, who fought for the mother and her family, was brutally murdered by Islamists. The murderer was enthusiastically celebrated as a hero of Islam.

A fatwa was issued against Asia Bibi, that requires every Muslim to murder the Catholic. Therefore, the necessary safety precautions make life in prison for the "condemned" even more unbearable. Pope Benedict XVI. appealed to the government and the Pakistani people. Vatican diplomacy tried to reach for extradition for Asia Bibi. This is so that she would be removed as a "bone of contention" from the country, but bringing her to safety. But the Islamists have created a death zone of scorched earth for the Christian. No Pakistani politician dares after the murders to unleash the Islamist "people's anger" on earth. Western governments have kept up with symbolic "pressure" on the government of Pakistan. Pakistan is an important and historic U.S. ally in the region. The neighboring country of Afghanistan could fall into the hands of the Islamists by way of the Asia Bibi case. Thus is the fear in the Western state offices. The strategy is: peace before justice. Asia Bibi has thus become a symbol for hostages, for a country where power is not exercised by the Islamists.

In the first half of June, Asia Bibi was shifted from the high-security prison in Sheikhupura in the women's prison in Multan. For the family members, the trip also means twelve hours for each visit. Rides that always are always made by the family with special precautions to avoid detection, or falling into the hands of Islamists. "It sounds absurd, but the family members are currently living almost a more dangerous life than Asia Bibi behind the terrible prison walls," says a Christian family lawyer. Whoever was able to visit Asia Bibi in the past few months, got to hear the same words: "Please, do everything possible for my freedom. I am strong, but I'm going weaker day by day."

Asia Bibi is far from the only recent case of the tragic Islamist hounding of Christians. The list of persecuted Christians is long and the number of Christians killed grows from year to year. The young Christian Rimsha Masih was eventually acquitted because it could not be proven that the Imam falsified incriminating evidence. A rare stroke of luck, where justice came before Islam. A return to her life was still no longer available for the young girl in Pakistan yet. Islamists do not think much of the state courts. Your judgment is sure, with or without a judge. Rimsha Masih received political asylum in Canada and lives with her family recently in the North American country. However, they are there under false names and with new documents, because Islamists are present almost everywhere.

The fate of Asia Bibi might also threaten two other Christian women and their families. In one place, the southern province of Sindh, a rich Muslim landlord has tried to abduct the Catholic Nazia Masih, to marry her after the forced conversion to Islam. Her family was able to prevent the worst appealing to the local bishop. But Nazia and her aunt, the Catholic nun, Sister Marie Khurshid's lives are in danger. The Islamists have vowed revenge.

God bless her, and all Catholics and other Christians under siege in Pakistan and the rest of the Umma. Let's remember them in our daily prayers.

What an awesome photo

I pray that Congressman Chris Smith's efforts can save her.