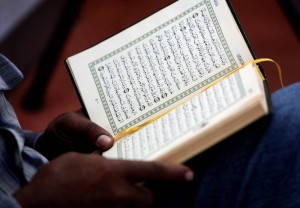 Edit: inter-religious dialogue puts parties adverse to Catholicism in power?
Wait, there's a Calif of Cologne?  Did someone go back in time and make the Muslims win in 1483 on September 11th?
(Vatican) The Islamist Gülen Movement , always careful to emphasize their cultural side and to "hedge"  influential contacts, now also uses Pope Francis for their "self-promotion".  And the  Osservatore Romano helps. The semi-official newspaper of the Pope recalled in an article about how Bergoglio Archbishop of Buenos Aires, was given a Koran. "The election of  Pope Jorge Mario Bergoglio  is greeted by all Argentines with pride, whichever is their creed," writes the L'Osservatore . It reported  a speech by Nancy Falcon, since February 2012 Head of the Islamic Dialogo Centro Intercultural Alba of Buenos Aires, who reported publicly about "cordial relations" with Cardinal Bergoglio. Falcon, says the Osservatore Romano , "explained in a special episode" what has happened in the last year,  "during her visit  in the Archbishop's Palace. The Cardinal, who had on his desk next to a copy of the Torah and the Gospel,  received from the Director of Centro Alba a copy of the Koran."

Torah and Gospel on the desk - Korana as a Gift

A gift that "was very much appreciated" by Cardinal Bergoglio says Falcon. "Bergoglio was well informed about the work of the Centro Intercultural Dialogo Alba and asked them to pray for him, says the Osservatore Romano on  Falcon's comment. "A similar request, which he made as pope to the whole world shortly after his election," said the representative of Islam. "A humble gesture that impressed us even more than we have learned that he is our new pope," said Falcon. The 31 year old Argentine, Nancy Falcon comes from a mixed religious family: father, Catholic, and a Muslim Syrian born mother. The two daughters, Nancy and Gabriela decided to Islam.
Falcon explained  the episode during the visit, which the new Archbishop of Buenos Aires, Aurelio Mario Poli,visisted the Islamic center Alba  during Ramadan.

Who is behind the Center for Intercultural Dialogue in Buenos Aires?

What is this center and who operates it? The center is part of the movement of the Turkish-Islamic preacher Fethullah Gülen. His movement, which originated in the Nurculuk Movement has represented pan-Islamic ideas and sharia as the basis of the legal system. Gülen supports the Erdogan government and is one of its most significant pioneers. The Dialogo Centro Intercultural Alba belongs to an international network of Gülen Movement , which is equivalent in Germany the Forum for Intercultural Dialogue (FID) in Berlin.
Gulen, who is presented and revered by his followers as the "Gandhi" of Islam, has created its own Light Houses for training and life models for young Muslims. Gülen, the son of an Anatolian village Imam was later then with the Caliph of Cologne who became known as Cenaleddin, was trained as chaplain at a mosque in Erzurum in eastern Anatolia. In 1999 he fled from a trial in the United States, as a power struggled raged in Turkey  between the Kemalists and the supporters of Gulen Islamic parties. Until then, he had written numerous anti-Western pamphlets on which he has since recanted.  Reason for his escape was in the announcement during a sermon to his followers. In it she pointed to Gülen:

"You must enter the arteries of the system without being noticed here. You must wait until the right moment has come to you until you have taken the entire state power. If we act rashly, the world will fall on our heads, Muslims will suffer everywhere. It would be like breaking an egg without waiting the 40 days until the chick hatches."

The American sociologist Helen Ebaugh estimated its  supporters in Turkey on in 2010 at about 10-15 percent of the population, plus about eight to ten million in the rest of the world. As his followers pay a tithe, Gülen has built up an extensive network of facilities and organizations. This includes having Zaman, today's highest-circulation daily newspaper in Turkey with its own European edition, as well as the television station Ebru TV and Samanyolu TV, a private news agency and the Bank Asya for financial transactions, private schools, a myriad of companies in Germany alone estimates their number in the three digits, and a great humanitarian organization that took in $ 16 million in donations in 2009.
The Turkish journalist Ahmet Sik wrote the book about Fethullah The Army of the Imam . This means that the Gülen movement as the "most powerful brotherhood" in Turkey, which has "infiltrated" the police, military and state apparatus since the 80's, to replace the nationalism of Atatürk by a re-Islamization. Sik's research has not fared well. He was charged with a fanciful accusation in court for belonging  to an ominous secret organization over which he had revealed something in his reports. This is possible because the Gülen movement is very strong in the police and judiciary. His book was banned and could be published only on the Internet.

Another Turkish author wrote a knockout book about the Gülen movement and he was also arrested with the accusation of belonging to a Left-wing group. The movement "is powerful and to mess with it comes at a high price," said the lawyer Fikret-Sik Ilkiz. In a diplomatic cable from the U.S. Embassy in Turkey to the State Department in Washington, it was said in 2009: The Gülen Movement is "controls trade and industry and has deeply infiltrated the political scene. At least one third of Erdogan's ruling party MPs belong to the movement, as well as the Department of Justice and the Minister of Culture, wrote the U.S. diplomat. James Jeffrey, U.S. Ambassador to Turkey from 2008 to 2010, in a report.  It is difficult to prove the infiltration of Turkish police by the Gülen movement, but we have found no one who would deny such. The Marburg Islamic scholar Ursula winder-Stegemann says about the influence of the Gülen movement : "It is the most important and dangerous Islamist movement in Germany." The Gülen movement speaks of itself as cemaat (community).

"The Army of the Imam": Alba Centro in Buenos Aires - FID in Berlin

"More than a hundred educational institutes operate in connection with cemaat: schools, tuition centers." They have established  15 'discussion clubs', such as the Forum for Intercultural Dialogue Berlin (FID). The clubs organize conferences to meet rabbis, priests and imams, they invite you to travel to Istanbul. "

This was written by Der Spiegel in August 2012 after the report on the WDR  The Silent Army of the Imam - Had broadcast on Fethullah Gulen's network. Despite the intense, dutiful preoccupationn with Islam,  Germans hardly know anything about the Gülen movement, although this is largely representative of the Turks in Germany and Austria toward the Erdogan government. This is probably also responsible for ensuring that a number of high-ranking German politicians are involved in the cultural associations of the movement. This protects it. In the Member of Advisory Board, for example, the former president of the Bundestag and unsuitable Catholic in name only, Rita Süßmuth (CDU), a native of Iran Member of Parliament and security spokesman Omid Nouripour (Green) and the last GDR Foreign Minister, Markus Meckel (SPD).  At FID events, the former Senator of Berlin, Ehrhart Körting and the President of the Berlin House of Representatives Walter Momper (SPD), the Minister of Justice, and Minister for Integration Jörg-Uwe (Hessian State Chairman of the FDP) ,  the particularly Islam-friendly chairman of the Foreign Affairs Committee of the Bundestag and former CDU General Secretary Ruprecht Polenz (CDU) and many others have taken a  prominent part in politics, religion, culture and science.
As in Berlin, they seek all cultural offices in Buenos Aires to make influential contacts. This is more recently from the Gülen  Movement, in which Nancy Falcon has given  Pope Francis a Koran and makes this episode public. Not only is the Italian edition of L'Osservatore Roman of help, but also the German editors of Radio Vatican, from which the message was distributed last Saturday.

The power/influence of the Catholic Church within nations is gone. Now Islamists and Jews will fight it out. The Jews as of now are still more powerful obviously. But they are not looking at the face of peace.

I'm sooooo tired of having to explain the actions of modern(ist) Popes to my non-Catholic friends and coworkers.
Vatican II era "dialogue" = indifferentism and syncretism

John Vennari recently said he wouldn't want Francis I teaching religion to his children, that about says it all.

"Presents and gifts blind the eyes of judges, and make them dumb in the mouth, so that they cannot correct."

"The most High approveth not the gifts of the wicked: neither hath he respect to the oblations of the unjust, nor will he be pacified for sins by the multitude of their sacrifices."

"Do not offer wicked gifts, for such he will not receive."