Edit: the harvest is plentiful but the laborers are few… 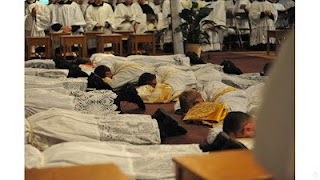 Here’s the report from a Catholic Life:


Fulfilling the mission of the Society of St. Pius X - to form holy priests - 11 new priests were added to its company on Friday, June 21st, along with one Dominican for the Avrille (France) community.

These young deacons were ordained to the Priesthood of Our Lord Jesus Christ by Bishop Alfonso de Galarreta during a beautiful 4-hour long ceremony that included the solemn Pontifical Mass. In attendance were 82 priests, many religious, and over 1,500 faithful, who travelled from all parts of the United States (and beyond) to witness this wonderful event for the Catholic Church, as well as to pray for the increased holiness of the ordinands.

Also, not to be forgotten on that day, was the ordination of 6 subdeacons to the diaconate, though they are not shown in the image gallery below.

May God Bless the SSPX, as they have retained the beauty of the timeless Mass, as well as the traditions and sound doctrine of the Catholic faith. I pray for the restoration of the above throughout the Catholic Church. +JMJ+

Thanks be to God and to His holy servants. Pray for perpetual increase +

There were 12 priests ordained at the Taj in 2008, the largest in the nation that year, just FYI. It comes and goes. There's supposedly 20-25 new seminarians entering St. John's Seminary in Camarillo this year.