Symbolic Demolition of a Church in the "Year of Faith" 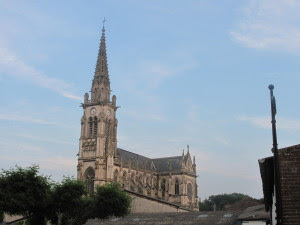 (Paris) "The church was destroyed, as the terrible photo shows," said the Association Mémoire Vivante du patrimoine gestois (MVPG) that had been campaigning for the salvation of the Church. In France, the demolition of churches continues. After the church of Saint Jacques in Abbeville ( see separate report ), the church of Saint Pierre aux Liens Gesté was demolished in the western Anjou (Maine-et-Loire departments).

The renovation of the Church of Abbeville was too expensive. If the buildings are dilapidated, the mayor recently, called for the "deconstruction" as the "cheaper" means the termination. Or, as in the case of Gesté, to make a new building in place of the old church.

Gesté is located just six kilometers from the Brittany. On the 5th of February 1794, the place was burned down by the Colonnes Infernales , the "Hell Brigade" of the French Revolution. 300 Chouans, Royalist Catholics, were massacred. "The dead should be our duty to fight for our heritage," goes the call to protest against the demolition. The current church was built in 1800 and is now being demolished on the ruins of the church destroyed in 1794 and initially expanded in subsequent phases in the classical, then in neo-Gothic style.

The cost of the demolition amounts to 200,000 euros. The new church at one million euros. What for?, ask the critics and point to the waste of money and destruction of cultural heritage.

The Bishop of Angers rejects disapproval of the demolition action. The pastor responsible resides not in Gesté, but in the nearby town of Avrillé where the old Gothic church of Saint Gilles was replaced in 1983 by a modern elliptical construction.

I had to stop watching - too painful.

They're destroying our heritage, and replacing it with...airport terminals?

This is sheer madness!! I agree with athelstane, it was too painful to watch.

"They design to change Thy promises, and destroy Thy inheritance, and shut the mouths of them that praise Thee, and extinguish the glory of Thy temple and altar,..."

That video is incredibly sad, I can't watch very much of it either. I have no doubt that much of the US Catholic Episcopacy (Mahoney, O'Malady, Dolan etc) would love to wipe out what they view to be horrible old buildings and replace them with glass-covered spaceships that completely reject the Logos of sacred architecture displayed by those noble old buildings. They're giving hundreds of thousands of dollars to radical pro-abort, population control, Marxist organizations via the CCHD every year but they have no funding for repair of old churches or pro-life genuinely Catholic groups. *sigh*
are things going to get any better in future generations of bishops?

If this is not a sin in itself it is a sin anyway because they who are responsible must be unabsolved sinners.

I finally got the gut to watch and yeh no question,
it's a sin. And the sin is on a lot of people.

One picture is worth a thousand words, so the saying goes, and nothing more perfectly captures the state of the Church today than that horrible video. The savagery of this action, coupled with the arrogance and stupidity of the ecclesiastics who allowed it (or did nothing to stop it), leaves me speechless.

It is a harbinger of worse things to come.

And then a mosque will stand in the same spot instead. Wouldn't' be surprised if that happened and I honestly prefer that than another airport terminal being raised up.

Besides being sinners these people are downright crazy.

Alas! Alas! the infamy of Bishop Pierre Cauchon lives on & is perpetuated.First it is the brutal butchery under the guise of legalities of saints like Joan of Arc, now its the Christian legacy of the Catholic people.

I did not see a complete investigation of alternatives to save a building that is replete with unsalvaged treasures & I do not believe that it was too expensive to restore...To modernise...that is another story & perhaps this was the original intent.

Since a bishop's authority is limited to the preaching & teaching of faith & morals, & sanctifying of the Christian people & does not extend beyond into the field of culture, architecture, & art where even they are fallible we can without a qualm of conscience question & criticise despite the undemocratic threats against questioning this measure of demolition.

I recommend firstly a complete architectural & financial investigation of this assault on heritage & the responsible parties be hauled over hot coals by process of the law including the mayor & most especialy the bishop.

I would further publicise this widely for debate & even put forward the bishop's proposal before Rome.

I had the impression that since the french revolution all churches belonged to the state.

Would this demolition not constitute an act of vandalism against the state?

My second recomendation is that an international fund be set up for the preservation & where not possible,attentive dismantling of such treasures.