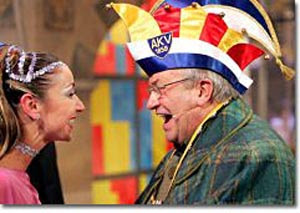 "The trend is more in the direction of the renewed Mass."

I can only wonder what trend the Cardinal is looking at.

Oh yes, the New Mass and the 'fresh air' of Vatican II has done wonders for the Catholic Church. Cardinal Lehman's comments are not surprising since these Old Liberals' goal is to destroy the Church. They will fail of course, but not after they have inflicted so much damage. Domine, miserere nobis. +JMJ+

Every time I see that photo I keep thinking..."Hold the pickles. Hold the lettuce. Special orders don't upset us."

Ironic given that TLM offered in my diocese for decades was assisted by many of the homeless of the city and was offered in a downtrodden urban neighborhood. Only since Benedict put it on the radar did this liberal diocese move TLM to a clean well cared for building is the nice part of town. Of course the homeless can no longer attend, the buses do not travel on sunday, and it is too far to walk as they used to. Prestige and false pretenses indeed.

A wonderful witness of the credibility of the these Bishops opinion.
http://www.catholicnewsagency.com/news/german-bishops-to-quickly-sell-shares-in-porn-publisher/

The Cardinal is stuck in the 60's. Thank God nature is taking care of his generation!

Anonymous 7 June 11:19 AM, That is appalling. Is it too late?. Are the old neighborhood people lost. Why did not the Priest see that volunteers and if necessary voluntolds made an effort to keep up with these people and pick them up for Mass? What kind of clean cared for Building did they move to?

The TLM is elitist only because the Novus Ordo is dumbed down.

50 percent under 16 years old at our beautiful Latin Mass. We are the future ! Vivo Christo Rey ... bub-bye now liberals...he he he