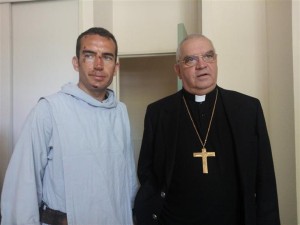 (Avignon) A priest of the Catholic Community of St. John was assaulted on Monday night on the open road. The attackers, four men of North African origin, presumably Muslims, beat up Father Gregoire,  till two other members of the Communauté de Saint-Jean came to the rescue. Father Gregoire was lying unconscious on the ground. He was taken to hospital, where he stayed overnight for observation. He suffered numerous bruises, bruises and a broken nose.
The incident occurred in the southern French city of Avignon. Father Gregoire was, as is usual for the Community of St. John, on the street in the habit.
Monsignor Jean-Pierre Cattenoz, the Archbishop of Avignon was at a Tuesday morning press conference to publicize the serious aggression. The archbishop called for increased security measures in the district of Saint Ruif. Monsignor Cattenoz complained increasing attacks against Catholic priests and religious Affected were mostly members of the Community of St. John, which are particularly active in the pastoral district.
The neighborhood, named after the saintly founder of the city,  is today the "Arab-Muslim region of Avignon," in which was "Sharia in Action", the Observatoire de l'islamization .
Text: Giuseppe Nardi
Image: Observatoire de la Christianophobia
Posted by Tancred at 3:20 PM

If anyone cares to, go to amazon kindle books.
E. Michael Jones, Culture Jihad in Tehran .
Read the short book description. It is interesting.

[To be "fair and balanced"]

The incident took place on 4 May during Holy Saturday celebrations in Jerusalem. The Patriarchate and local Christians complain of police brutality. For Jerusalem bishop, “denying access to the Holy Sepulchre and mistreating pilgrims, including the elderly and disabled, have nothing to do with security.”

Jerusalem (AsiaNews) – The beating of a Coptic Orthodox priest on 4 May only a few metres from the Holy Sepulchre, during Holy Saturday celebrations, has become a major issue after an amateur video surfaced online, later posted on the Jerusalem Post website. The tape shows Fr Arsanios, the 85-year-old head of the Coptic Church in Ramallah, brutally pushed around by Israeli police.

On Monday, the Patriarchate of Jerusalem and the leaders of the Christian Churches in the Holy Land issued a statement slamming the excessive and unwarranted security measures taken by police that prevented “thousands of the faithful from quietly participating in Easter celebrations in the Holy Sepulchre of Jerusalem.”

Interviewed by AsiaNews, Mgr William Shomali, patriarchal vicar to Jerusalem, said that such acts take place every year, which pilgrims and religious authorities have always tolerated, but on this occasion, police went too far.

“We do not criticise the need for security in such events or the presence of Israeli police,” he said, “but denying access to the Holy Sepulchre, treating pilgrims and clergy with brutal methods, shoving handicapped people are hurtful. The Patriarchate had to take a stand.”

Apparently, the incident took place after police began to block streets in the old city of Jerusalem stopping the flow of pilgrims to the Holy Sepulchre.

This resulted in an altercation between some agents and pilgrims, including Fr Arsanios, who was manhandled with brutally. The elderly clergyman briefly lost consciousness, and was subsequently treated at an area hospital.

The incident prompted Deputy Foreign Minister Ze’ev Elkin Ze’ev Elkin to express his apologies to Cairo and the leaders of the Coptic Orthodox Church.

According Micky Rosenfeld, a spokesman for the Jerusalem police, law enforcement and representatives of the Coptic Orthodox Church met in recent days to shed light on the incident and determine responsibility for the incident.

Jews(in general) loving or really giving a fig for their Christian "younger brethren" is yet one more sham. They of course really care about Christian money and votes. They hate Arabs and work diligently to make Christians HATE Arabs. Similar things go on in Israel all of the time.
Where to begin? Catholics who do not know the truth about the Jewish Question may want to start finding out.

To clarify " Similars things go on all the time in Israel. That is insults, spitting on nuns and clergymen, vandalism of Christian property, stone throwing, sometimes subtle sometimes not second class treatment.
The reference to E. Michael Jones e-book Culture Jihad in Tehran short description says historically uncannily rises when Christians ore not minding faith and failing in it's mission. Then look at description
E. Michael Jones e-book The Jewish Question. Brief summary:
One hundred years after the French Revolution Civilta Cattolica the official voice of the Vatican came to the startling conclusion: Any country which turns away from laws based on Catholic Church teaching and God's eternal law will end up being ruled by Jews. Look around us.

Sorry. Above that is Islam rises when..etc.

The Israeli police assaulting the 85 yr. old Coptic priest is also on you-tube and jpost.com 15 May and 17 May.

That could happen here in Ireland but more likely from other Irish people than Muslims. I am a priest and I can't go out dressed in my garb because of how anti-catholic Ireland now is. I am an Irish man and I hang my head in shame. We too are seeing the growth of ghettos of ethnic minorities which bodes very poorly for the future.