Immemorial Mass of All Ages in Notre Dame Cathedral and Canterbury 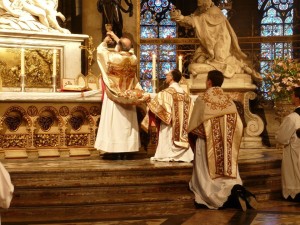 (Paris) 2013 is not just still the Year of Faith called by Pope Benedict XVI. In the Archdiocese of Paris, the 850th anniversary of the consecration of the Cathedral of Notre Dame.  That powerful gothic Cathedral, which in the past days has been desecrated by the suicide of  conservative historian, Dominique Venner and a subsequent grotesquely staged and paid entrance of the political agitators Femen.

On May 29th in connection with the Year of Faith and the 850th Anniversary of the Cathedral's consecration, a pilgrimage of tradition will also take place.  Around 7pm the pilgrimage will depart from the parish church of St. Eugene-St. Cecile in Paris.  The parish is 'birutual'.  It celebrates on Sunday and work days in the ordinary as well as the extraordinary form of the Mass in the Roman Rite.

The pilgrimage will lead through the old city to Notre Dame.  In the Cathedral at 8:15 the Immemorial Mass of All Ages will be celebrated.  The participants have the possibility under the usual qualifications, to receive a plenary indulgence for living and death, as granted by Pope Benedict XVI..

Ed: in addition to this historical event, it would be remiss of us not to mention another historic event, the first Immemorial Mass said in Canterbury Cathedral as it was reported by the Remnant in the following video.

It belongs to the RC.