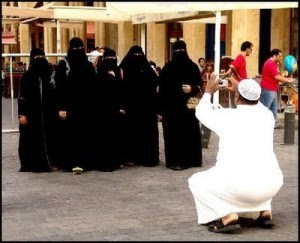 Bianca is a Christian name. How many of these Christian women have embraced Islam? Any stats?

There is a difference in that 3 or more people are being married in one ceremony versus a man taking more than one wife in individual contracts w/each woman. The toilet bowl of iniquity is rapidly overflowing

How happy Cardinal Daneels must be! His pupils learned their catechism well!

Because Cardinal Danneels refused to respond to requests to put an end to these practices,
http://www.brusselsjournal.com/node/4471

The brides look very nice. I'd never thought of black for
weddings.

Mohamatenism could yet prove to be the scourge of a dechristianised west and an indifferent liberal modernist neo-catholic church mismanaged by the immoral contemporary Vatican regime. It is a such a poignant paradox to witness one of the focal points of the fascist EU state, Brussels, becoming a mohamaten majority. Indeed, what a paradox! Almost as paradoxical as Pope John Paul II welcoming the building and opening of the Grand Mosque of Rome and its Grand Synagogue.
Time to unroll that famous prophecy that was handed to Prophet Daniel concerning the end times.