Edit: an increasingly US brokered war continues in Syria as Catholics and Orthodox Christians are being driven from the land. 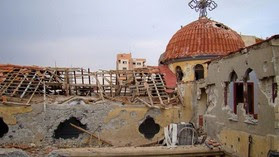 Damascus, 22/04/13 (Kipa) The Franciscan church and associated monastery in the Syrian town of Deir ez-Zor were destroyed in a violent explosion. This was reported by the Vienna-based foundation "Pro Oriente", citing the Vatican's Fides news agency on Sunday. Speaking to the press agency Tony Haddad said, the Franciscan Church was until then the only remaining undamaged Christian house of worship in the city on the Euphrates. It remains unclear how the church was destroyed.

Eyewitnesses reported that rebels entrenched in the Church, following which government soldiers took the church under attack. There is also the version of a car bomb.

Haddad revealed his bitterness about "so much hate and disrespect.” The religious explained that there are no more Catholics. Recently had left together with the Mother Teresa Sisters and about a dozen residents of a nursing home, the city in view of the critical situation of the two in Deir ez-Zor, and just recently was Franciscan Fathers. They were the last surviving Catholics at Deir-ez-Zor. Haddad is nevertheless optimistic: "The church is made of stone and can be rebuilt one day will begin in the spring of Middle East peace." (Kipa / cap / on)

Thanks for this Post. (Personally I, am furious.) I wish more people would Say Something! I am divorced from politics. Left, Right and Middle ! I have 1.7 % faith or trust in politicians. Western Nato Nations, led always by the U.S. whether "from behind" the Polly Parrot Press phrase of the daze and daze. What ever U.S. visible or invisible presense U.S. is the dominant(presense).

Some people , well many people in fact will say this is not true..but it is true. That the U.S. is in the business of imposing it's will the world over. The U.S. policy is, agree, comply, submit, get with the program or pay the price. The U.S. decides what the price will be. Look what was done to Iraq(no WMD). Look at Libya. Now look at Syria.