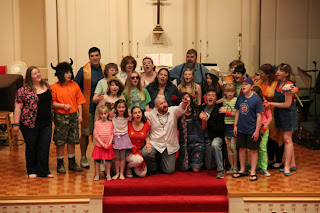 Edit: he's definitely referring to those who wish to turn back the clock to 1968. Obviously, if Vatican II has taught us anything of history it's that the Church is ancient, but ever young and always reforming. The following is from Radio Vatican:


Pope Francis said the Holy Spirit pushes people and the Church forward but we resist this and do not want to change. His remarks came during his homily at the Mass on Tuesday morning celebrated at the Santa Marta residence which was dedicated to Benedict XVI in honour of his 86th birthday. Susy Hodges reports:

Text follows:
Pope Francis dedicated Tuesday's mass to Benedict XVI 16th who turned 86 on this date. “May the Love be with him, comfort him and gave him much consolation,” he said.

Pope Francis’ homily at the mass was centred on the theme of the Holy Spirit and our resistance to it. It took its inspiration from the first reading of the day which was the story of the martyrdom of St. Stephen who described his accusers as stubborn people who were always resisting the Holy Spirit.

Put frankly, the Pope continued, “the Holy Spirit upsets us because it moves us, it makes us walk, it pushes the Church forward.” He said that we wish “to calm down the Holy Spirit, we want to tame it and this is wrong.” Pope Francis said “that’s because the Holy Spirit is the strength of God, it’s what gives us the strength to go forward” but many find this upsetting and prefer the comfort of the familiar.

Nowadays, he went on, “everybody seems happy about the presence of the Holy Spirit but it’s not really the case and there is still that temptation to resist it.” The Pope said one example of this resistance was the Second Vatican council which he called “a beautiful work of the Holy Spirit.” But 50 years later, “have we done everything the Holy Spirit was asking us to do during the Council,” he asked. The answer is “No,” said Pope Francis. “We celebrate this anniversary, we put up a monument but we don’t want it to upset us. We don’t want to change and what’s more there are those who wish to turn the clock back.” This, he went on, “is called stubbornness and wanting to tame the Holy Spirit.”
The Pope said the same thing happens in our personal life. “The Spirit pushes us to take a more evangelical path but we resist this.” He concluded his homily by urging those present not to resist the pull of the Holy Spirit. “Submit to the Holy Spirit,” he said, “which comes from within us and makes go forward along the path of holiness.”

Email ThisBlogThis!Share to TwitterShare to FacebookShare to Pinterest
Labels: 1968, Pope

Sounds like what a Charismatic (which he was, at least, before being elected) would say…

Considering historical events and the 50 years they’ve had to “implement” the Council, I’d suggest that any other conclusion about it what he’s saying would be ridiculous. I can’t imagine the Pope is unaware of the destruction and decay wrought at least indirectly in the Council’s name, so I can’t imagine he’d be talking about anyone else except for the disciples of ++Suenens and ++Kasper.

I think the Holy Father is talking to a different audience.

I think he is talking to the ones that want to turn back the clock to the 1970s and that fiercely oppose the implementation of the Council. As it stands at least with those that have the view of Pope Benedit the Council has not been implemented as of yet.

Hanging onto hope by a thread said...

I waited for you to post your own comments. Thank you for what you said. I can carry a little hope this way. But not the way that I was reading it.

I think you're all whistling past the graveyard...he's talking about those who love tradition and what Benedict was doing in the 'reform of the reform'. I think to read it any other way is forced and fanciful. There is so much schizo messaging coming out of this Vatican it's making me dizzy , and certainly keeping me on guard. I see no cause for joy in this homily.

You’ve got to see the glass as half-full.

Everyone is saying, "I think he is saying". Different, different, "You know who you are". the-eye-witness, a little while ago posted, ' Words No One Dare Say: Mortal Sin'. One thing the post addresses is that the Popes used to be understood. Why aren't they now? Very good question isn't it?

Am I wrong to find mirth in it?

No. You are not wrong. It seems I was criticizing everyone but I was NOT. I am in empathy and am myself befuddled on this one. I have been since Pope Francis took Saint Peter's Chair. What can we do but try to sort things out with others whom we feel are in empathy? After all, I come around here a lot. It's a good place. And what I was trying to say is it is as though the Pope is saying 'You know who you are."\' 'You know who I'm talking to'. But we don't. And eye witness said why doesn't the Pope, the clergy speak clearly, say what they mean instead of trying to stay in Neutral territory or something?

Yesterday he was almost pointing the finger at Neocaths who are dishonestly exploiting the suffering of Jews during World War II to misrepresent Catholics. I found his use of the word “Sanhedrin” in relation to the persecution of St. Stephen Protomartyr to be very interesting and provocative.

I think we know what this Pope has done in the past, and where he is likely to go to, but I still believe in God’s guiding hand and am hoping for the best.

Tancred, I definitely get your point. And it is a very interesting re: St.Stephen. There have been thus far so many observations and claims concerning this Pope's past actions, sympathies, affiliations, some documented but not necessarily always interpreted correctly, thus confusing. But I agree with you. We must continue for now to see the glass as half full and pray for the Church and the Vicar on earth.

I haven't heard or seen anything encouraging either. However...an overt, anti-Catholic (which anyone against Tradition would have to be whether they realize it or not!)is exactly the kind of pope that Our Lord would use to show His power and the triumph of the Immaculate Heart of His mother. So for that reason and only that reason, this pope should give some hope to the Faithful Catholic.

On the subject, read eye of the tiber. It's really funny.