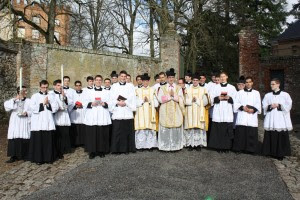 Shades of 1999 all over again?! And the FSSP still wait for their bishop!

I think that’s indisputable. There are two parties at work in Rome and right now the shadow party controls the dialog with Traditionalists for the most part. Unfortunately, a lot of the people reporting on this don’t’ take that obvious fact into account, either wittingly or unwittingly.

Fight back, IBP! They hosed you on 'exclusive use' and then they tell them they can't say all those terrible, terrible things about VII. Shea-approved 'traditonalists' need to take a hard look at what's been going on with them; hopefully it'll open their eyes.

A bishop...but we didn't say when.

They were intentionally lied to. They were all duped.