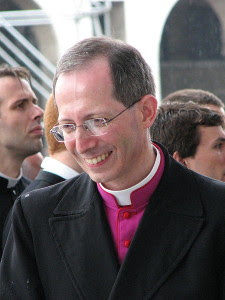 Link to Katholisches...
Posted by Tancred at 9:50 PM

Considering what Pope Pius XI said in Quas Primas instituting the Feast of Christ the King, getting rid of Msgr. Guido Marini would have disastrous catechetical and spiritual consequences, for
people are instructed in the truths of faith, and brought to appreciate the inner joys of religion far more effectually by the…celebration of our sacred mysteries than by any official pronouncement of the teaching of the Church. Such pronouncements usually reach only a few and the more learned among the faithful; feasts reach them all; the former speak but once, the latter speak…forever. The church's teaching affects the mind primarily; her feasts affect both mind and heart, and have a salutary effect upon the whole of man's nature. Man is composed of body and soul, and he needs these external festivities so that the sacred rites, in all their beauty and variety, may stimulate him to drink more deeply of the fountain of God's teaching, that he may make it a part of himself, and use it with profit for his spiritual life.

Trent Session XXII's "Canon VII.—If any one saith, that the ceremonies, vestments, and outward signs, which the Catholic Church makes use of in the celebration of masses, are incentives to impiety, rather than offices of piety: let him be anathema."—seems to contradict Sacrosanctum Concilium §34 that "The rites should be distinguished by a noble simplicity," viz., minimalism, because "sumptuous display" (§124) is to be avoided. What is spiritually profitable is to be avoided?

Well said. And that was very probably the main goal of the liturgical iconoclasts of the swinging 1960s, to implement precisely a kind of liturgy that does not teach,or nourish, or inspire.

It's a one way road to Unitarianism. At what milepost is the Church today?

This really scares us immensely; as converts, we were utterly dismayed and schocked to witness the surprisingly low quality of the music in S:t Peter's before pope Benedict XVI.
THE LITURGY MUST FOLLOW IN THE FOOTSTEPS OF BENEDICT XVI.
If it would swing back to what it was before, the church will continue to loose members of the faithful.
Nobody can be attracted or persuaded by bad music in the liturgy; the world is filled with pop noise and all sorts of banality. Why, why, would the glorious catholic church wish to take part in supporting and spreading this?
We pray that pope Francis will continue in the footsteps of Benedict XVI. After all, Benedict's great knowledge of music is widely recognized and admired.

And how do you feel about it now? Love the liturgy now? Mons Marini swings a mean

Thurible. He is a brilliant liturgist snd a very holy priest. A special man.