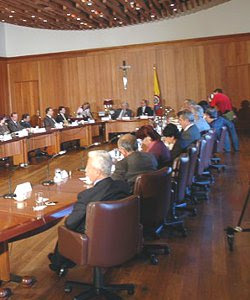 (Bogota) The State Council of Colombia has repealed the government decree, with which the killing of unborn children by abortion had been done with impunity. By the Decree 4444 of 2006, the President allowed infanticide in exceptional cases, which had been addressed by the Constitutional Court in a judgment of the same year: in the risk to the mother's life, and in malformation of the fetus, during pregnancy due to rape. Already in 2009 the decree was suspended.

The State Council did not address the decision of the Constitutional Court for decriminalization of abortion in exceptional cases. That he would not. But he lifted the presidential decree on the grounds that to solve the issue a properly concluded gekommenes state law is indispensable.

Only when a law exists, may the Government dissolve them with corresponding decrees, the State Council said.