(Rome) Pope Benedict XVI. had launched talks between the Society of St. Pius X. and the Holy See. A few months after his election he received Bishop Bernard Fellay, the Superior General of the Society of Castel Gandolfo. Despite his patient efforts during an eight-year pontificate his desire to bridge the gap and a canonical recognition of the Society did not materialize.

On the 21st of February, Benedict XVI again lifted one of the [many] CDF “ultimatums” for 22 February for an answer from the SSPX to the "doctrinal preamble" of June 2012. He left the decision as to the fate of the Society to his successor. 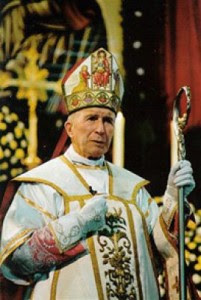 While the radical left’s fight on the political level in their fight against the Church continues unfazed against Pope Francis, the Modernists in the tattered, left side of the Church from Hans Küng and Leonardo Boff, applaud the new Vicar of Christ on earth and to suborn him as much as possible. Behind this strikingly flaunted joy just conceals another form of criticism of Pope Benedict XVI. and his pontificate. By praising his successor, they put down the image of their favorite bogeyman, Benedict.

Of course, it's also about an unvarnished attempt by praise for the new Pope to show their own positions in a hospitable light. Leonardo Boff says in a Spiegel interview, the new pope was set for a gay-friendly and adoption rights for homosexuals. His rejection of gay marriage in Argentina had been obtained only after pressure from Rome. Also a form of wanting to control a pontificate from the outside. But the reality is different. The opinions of the then Archbishop of Buenos Aires against the introduction of gay marriage are just as authentic as the resulting conflict with the Argentine government of President Kirchner. Proof that Boff's representation doesn’t correspond to the truth is an internal letter of 22 June 2010 by the then Cardinal Bergoglio to the cloistered convents of Carmelite nuns in Argentina. In this letter he condemns degenerate "marriage" in the strongest terms, and asks the nuns to pray intensely to the Argentine senators not to vote at that time for the law being drafted by Parliament.

So much for the aging modernists. But what about the SSPX?

The relationship of the newly elected Pope Francis and the SSPX founded by Archbishop Marcel Lefebvre was recently attended by the American priest, Father John Zuhlsdorf and the Italian site Cantuale Antonianum.

A further contribution to the discussion was yielded in the meantime on the traditional Cordialiter site. Under the contribution "Pope Francis Trip to Econe” it reads:

"In the future we might receive a nice surprise, an apostolic journey of Pope Francis to Econe (Switzerland) to sign the historic peace agreement in the stronghold of Lefebvrians. That would be really a nice and concrete gesture of brotherly love. I do not think it is a non-realizable dream. It is now known that the Archbishop of Buenos Aires used to have warm relations with the Pius Brothers and I believe that if Monsignor Bernard Fellay would invite Pope Francis to Econe, the Pope might even accept the invitation. These days, we have seen that he is a spontaneous person, who can not be pressed into templates, ready even for unfamiliar and unpredictable gestures. I think that he would not let the clamor of the progressives intimidate him. Imagine the pope in the stronghold of the SSPX. That would truly be a historic meeting.

In the meantime it would be advisable for the SSPX to initiate friendly gestures such like Patriarch of Moscow. There would be nothing wrong there, if Monsignor Fellay and Patriarch Kirill would meet for dinner to talk about the dramatic would amicably spiritual situation in Europe and to other important issues for Christianity. That would not in any way contradict the doctrinal content of the encyclical Mortalium Animos by the great Pope Pius XI. If Bishop Fellay was photographed while he and the Patriarch of Moscow, was shaking his hand and the news spread that the two were friends, this would strengthen the position of the SSPX considerably. The modernists, they could not attack as much, since they might run otherwise the risk of damaging the diplomatic relations with the Orthodox, where they are known to take over a more friendly and respectful attitude as against the SSPX. “

I wonder if Pope Benedict XVI will urge Pope Francis, when they meet meet this March 23, to visit Ecône?

I don't look for Pope Emeritus Benedict to give any advice to His Holiness, Pope Francis! I would bet money that Benedetto intends to keep as low a profile as possible and to truly embrace, in earnest a contemplative existence. God bless them both!

Please read today's The Eye-Witness. Pope Francis we dearly pray will go where he needs to go and not spend precious time where he need not.

I suggest the SSPX keep there distance from Rome it is a cesspool as present!

Please, folks! Aberrosexualism is NOT “gay”!

The term “homosexual” was coined in 1869, by Austrian aberrosexualist propagandist Karl-Maria Kertbeny who sought to replace the then popular terms of sodomite or pervert with a clinically-sounding, morally neutral word.

The term “homosexual” caught on in medical literature and eventually replaced the words sodomite and pervert in popular speech.

Still -- because the word “homosexual” reminds people of sex and anything related to sex instinctively raises red flags for average, normal people, aberrosexualist ideologues needed to come up with a new word. So in the 1970’s, they stole from us the innocuously-sounding term “gay”!

Clearly, “gay” is a deceptive propaganda term –-a euphemism-- created to subtly undermine humanity's universal rejection of biologically aberrant, morally deviant sexual behavior, or aberrosexualism as it is properly called.

Is "gay" descriptive of biologically aberrant sexual conduct? Is it descriptive of a medical or a psychological condition? Is it clinical or scientific? No, it is not! “Gay” is a totally unscientific, anti-medical, irrational, arbitrary, and deceptive ideological propaganda term!

But, ladies and gentlemen, did you know that surveys reveal that the term “gay” increases public approval of aberrosexual behavior by 10 to 15%?

Why is that? Well, because the term "gay" conjures in your mind the idea or mental picture of happy, jovial, innocently “delightful” behavior or conduct. Now, we all know this is very far from the truth! If it were obvious that aberrosexual behavior was truly happy and joyful, the ideological propaganda term "gay" wouldn't be needed to "sell" us on this behavior.

Is it any wonder aberrosexualist hate group GLAAD spent ten long years lobbying The New York Times to replace the word “homosexual” with the word “gay” in all of its stories and op-ed pieces?

So please. Let’s top using the propaganda term “gay”. Aberrosexual icon Gore Vidal said it best: "gay is an adjective, not a noun." And, as if that weren't enough reason not to use the term this way, it's extremely degrading and offensive to every truly gay American to be equated with individuals that sexually behave in a biologically aberrant, morally deviant manner. No, Aberrosexualism is NOT gay and it's not a "lifestyle" either. It's a sad, disoriented, self-destructive, unhealthy sexual behavior; it's a 'deathstyle' for the extermination of Humanity. The correct word to identify those who engage in biologically aberrant, morally deviant sexual behavior is aberrosexual. Thank you.

Vatican Council II needs to be reviewed by both groups.

Vatican Council II says all Hindus, Buddhists, Jews, Muslims and Protestants are lost but this is a secret in the Church and no one is talking about it.

Ad Gentes 7 says all need faith and baptism for salvation. We cannot name any one saved in invincible ignorance (LG 16) etc for them to be known exceptions to Ad Gentes 7.

Vatican Council II is traditional on other religions and salvation.It is in agreement with the dogma extra ecclesiam nulla salus.

It is in agreement with the Society of St.Pius X (SSPX), the St.Benedict Centers,USA,the popes, Church Councils,saints and the Catechism of the Catholic Church (846,845,1257).

We cannot name anyone saved with the baptism of desire or elements of sanctification (LG 8).We personally do not know any exceptions, since those who are dead are not visible to us.

Yet for many Catholics, those saved in imperfect communion with the Church (UR), seeds of the Word etc are visible and known.So Vatican Council II for them is a break with the past.

No where in Nostra Aetate is it said that non Catholics do not have to convert in their religion or that they are saved in general in their religion.We cannot name any 'good and holy '(NA) non Catholic, who is saved and is an exception to all needing 'faith and baptism' in 2013 to go to Heaven and avoid the fires of Hell.

Vatican Council II is traditional. This is a grand secret.
-Lionel Andrades

Clearly, the suggestion of a visit by Pope Francis was made in jest. The proposal makes for brilliant satire.

I doubt it. If the Pope can deep-six the FFI, what makes us think he'll spare the SSPX if they'll ever come within spitting distance?